The Stand, reviewed by Sheri White 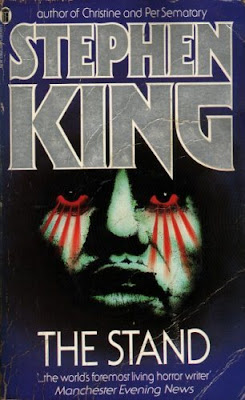 I discovered Stephen King when I was a freshman in high school, way back in 1980. My friend Angie had his collection “Night Shift”, and we read the stories together in the Home Ec lab when we had free time. I was enthralled with King’s storytelling, and wanted to read more of his stuff.

I found “The Stand” in the mall bookstore. Since it was the 80s, the end-of-the-world scenario appealed to me, even though the thought of it really happening was terrifying in the Cold War years. And it was huge! It was a book I could get lost in.

My family had a membership at our neighborhood pool, and I read “The Stand” for several days while laying stomach-down on a towel in the grass, delighted screams of little kids splashing in the water barely registering because I was so engrossed.

From the moment Stu casually advises Hap to turn off his pumps as he watches a car weave dangerously towards the small-town gas station in East Texas, I was hooked. Stu, Frannie, Nick, Tom Cullen, and Larry Underwood fascinated me with their stories and how they survived in the new world. And while Mother Abigail and Randall Flagg were representative of Good and Evil, their followers were not as black and white. Harold was a lonely, bullied kid who was easily influenced by Nadine, who in turn was drawn to Randall Flagg even as she tried to resist his dark charm. And although Larry Underwood found himself on Mother Abigail’s “team,” he was pretty much an asshole until he found redemption as the world fell apart around him.

I hated reaching the end of the book. I wanted more. I hoped for a sequel, and checked the bookstore frequently. There was no Internet, of course, so you had to read the newspaper for upcoming new titles, or talk to the guy at the Brentano’s register. But the years went on, and I never heard news of a sequel, to my disappointment. I read the book over and over, though. So many times, I had to replace my copy frequently. 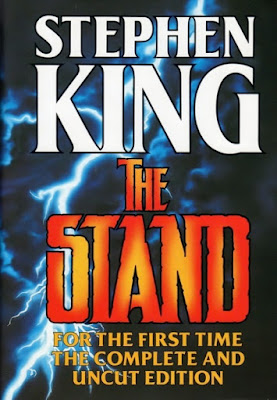 And then it was 1990 and I heard that “The Stand” was going to be reissued, this time with deleted scenes and details. I swear, I was at the bookstore waiting for it to open the day it was published, and the Waldenbooks employee handed me the first copy after he opened the box. I had even taken the day off work to read it.

It was glorious. “The Stand: Complete & Uncut” was everything I had hoped for. Additional characters added depth to the original characters – for instance, Frannie’s mother. Mrs. Goldman’s coldness had been hinted at in the original, but the uncut version showed just how she disliked Frannie, even to the dismay of friends who witnessed Mrs. Goldman’s indifference to her daughter. The Kid added tension to Trash’s story; it wasn’t so stressful for him in the original when he just got to set fires to whatever he wanted, but when he was held hostage by The Kid, his situation turned sinister. And of course, his goal was a sinister one, but he was another influenced by evil even though he himself wasn’t a truly evil person.

One of my favourite additions to the uncut version was the “No Great Loss” section – mini-scenes of people who didn’t make it through the end of the world, even though they didn’t get sick. The young woman who was glad her husband and baby were dead so she could finally have a life, but ended up locking herself in a walk-in freezer to starve to death. The woman who accidentally shot herself while protecting herself against all the “rapists” (all men, in her eyes) coming to get her. The drug dealer who overdoses on heroin.

Those little tidbits added so much to the story. I am always wondering at “off-screen” characters in apocalypse scenarios. What happens to survivors we don’t see? How many die in a stupid way after making it through the flu, zombies, nuclear war? Maybe that house the hero passed has a little kid in it who needs help, or maybe there is an unseen shotgun trained on him as he walks by.

The uncut version satisfied some of that curiosity, and I was delighted those scenes were included.

I still re-read “The Stand” every year or so, but I haven’t gone back to the original. It had its charm, and I loved it when I was 14. Ten years later, though, the uncut version appealed to the 24-year-old mom I had become (the mom who was glad her daughter was dead horrified me, but wouldn’t have affected me like that as a teenager), and I can’t go back. I still have my copy of “The Stand: Complete & Uncut” First Edition hardback, but have replaced my tattered paperback several times, just like the original.

My enthusiasm for King’s writing has ebbed and flowed since 1980. I mean, “Lisey’s Story”? 'Mucking?' Really?

But I will never forget how I felt as I read that opening scene at the neighbourhood pool in the Summer of 1980 – completely captured by the magic King wove with nothing more than words.

Sheri White lives in Maryland with her family. She has had a love of horror since she was two years old and watched "The Wizard of Oz" for the first time. She is a mom to three girls, ages 27, 20, and 17 (and is now a brand-new grandma!), and has instilled a love of all things scary in them as well. Her husband Chris is very understanding.

In addition to reading and writing horror, Sheri also proofreads, edits, and reviews for many horror sites both online and in print. She is also the editor of Morpheus Tales magazine.

She has had fiction published in many small press magazines and anthologies since 2001 and can be found on Facebook and also on Twitter as @sheriw1965.
at 09:00

Email ThisBlogThis!Share to TwitterShare to FacebookShare to Pinterest
Labels: The Stand