The Dark Tower: The Wind Through the Keyhole, reviewed by Gef Fox 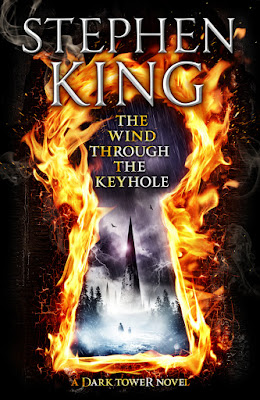 If Stephen King ever has any difficulty in re-immersing himself in Mid-World, given the amount of time between each book of his decades-old Dark Tower series, the man simply doesn't let it show.

I can't imagine anyone visiting this blog is at all unfamiliar with The Dark Tower series, but just in case, here's a long story made short: Roland is the last gunslinger of Mid-World, a decaying landscape, on a mission to reach the Dark Tower, where his world meets all other worlds (including our own). The whole thing is a blend of King's horror, with epic fantasy and some very weird western elements. An acquired taste, to be sure.

I came to the series late in the game, right around the time King had completed the seventh and final novel in the series. This allowed me to practically devour the books over the course of a couple years. Though, I held off a long time on the seventh book just because I didn't want the series to end. Weird logic, right? Well, this stalling was abated when King announced a new novel, a kind of stand-alone, would be published. Hallelujah!

The Wind Through the Keyhole, which takes place between the events of the fourth book, Wizard and Glass (featuring a showdown with an alternate version of The Stand's Randall Flagg), and the fifth book, Wolves of Calla (where events resemble The Magnificent Seven as Roland and company protect a village from said wolves), is a bit of an odd duck. I don't mean that disparagingly, and given an especially bonkers reveal in the sixth book in the series, the events in Keyhole could be described as almost quaint.

By odd, I refer to the almost Inception-esque framework woven into the novel, as Stephen King presents what could be described as the literary equivalent to a Russian nesting doll. Roland and company make shelter in an old building when a storm hits along their journey towards the Dark Tower. To pass the time, Roland entertains them with a story of his youth. Roland actually regaled them with a story once before of his formative years in Wizard and Glass, but this time around the story centers on a quest given to him in the wake of his mother's death … by his own hand. And within this story, which is the lion's share of the novel, Roland befriends a young orphan boy who has seen the monster he is after and to help assuage his fears, Roland tells a fairytale of sorts about a boy who goes on a journey braving all sorts of creatures to avenge his father's murder.

As a stand-alone, Wind Through the Keyhole works quite well with the whole “gather round the campfire, kids, and let me tell you a tale” schtick. And the crux of the story avoids being too entrenched with the broader aspects of the Dark Tower, allowing themes of fear, regret, and family to carry the load. That and King's incomparable way with language fans have come to know from the series.

As a companion or continuation of the Dark Tower series as a whole though, the novel stacks up to be a fun interlude. If you read the whole seven-book series and came back to this, I'm not so sure you're gaining any great insight into the relationship of Roland, Jake, Susannah, and Eddie. It might appeal more to those who have dipped there toes into the graphic novels, which touched upon Roland's younger days, offering some further glimpses into how he became such a relentless and resourceful gunslinger.

For me, it was a bit like catching up with an old friend who has stopped by to tell me a tale before he steps back on the road and makes his way to his ultimate destination, leaving me a little sad to see him go but thankful to have palavered with him one more time.

Gef Fox is a genre mutt who spent his childhood daydreaming about monsters, ghosts, and robots. Little has changed, though nowadays he writes about them, too. You can see for yourself by visiting his blog at waggingthefox.blogspot.com
at 09:00

Email ThisBlogThis!Share to TwitterShare to FacebookShare to Pinterest
Labels: The Wind Through The Keyhole