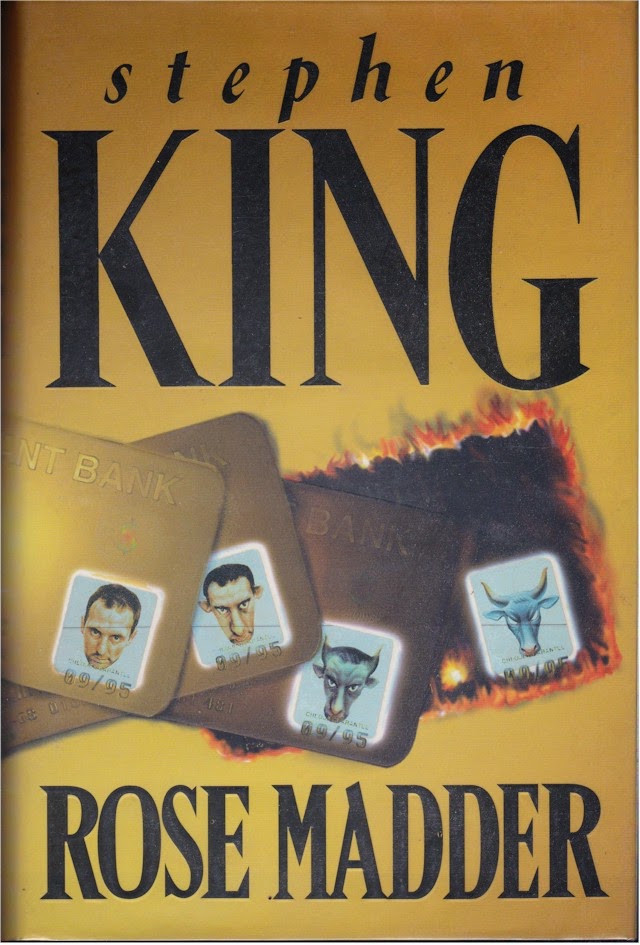 When I was a teenager I discovered Stephen King, I started with “The Shining”, and raced through his novels that came after that, one after the other. That period of frenzied reading taught me a great deal about what it took to construct a character that the reader rooted for, to create pace on the page, but more than anything, it showed me how to create a world, in the case of King’s books, a world often filled with horror and high stakes, put the reader right in the middle of it, and set their hearts racing. Some point around 1990, right about when I started studying English Literature at university, I stopped reading Stephen King for a good decade and as a consequence I missed reading “Rose Madder” when it came out. Published twenty years ago exactly, it was only when it came time to review it for this site that I picked it up and read it. It’s a fascinating book, classic King in some instances, deeply moving in others. And it’s almost another kind of book entirely, but not quite.

The book opens, not such much with a bang, as with an earthquake. We meet the heroine, Rose, at the very worst moment of her life, in the midst of savage beating by her husband, Norman, that causes the loss of her unborn baby. The next time we see her is 14 years later when she wakes up, like a Disney princess from a long sleep, as King describes it, and seeing a drop of her own blood on her pillow, finds the will to leave the monster she married.

It’s this scene setting, this pivotal moment delivering brilliance, that King is so skilful at. After only a few pages I was completely invested in this character, and her plight. I was as terrified as she was as she fled an abusive marriage, and as hopeful. As a novelist myself, I also teach from time to time at the Faber Academy, and the morning I started this novel, three days ago, I was able to hold the book up and show it to my students, and explain why a novel needed to start right on page one, and not page 101. It’s a perfect example of that.

And somewhere towards the end of the first third, Rosie finds a strange painting in a pawn shop, and there is where this novel begins to split into two, much like Norman’s fevered and violent brain. And I have to admit this is where I wished that for once, Stephen King has just written a straight out, real world, no supernatural thriller, because that would have been more than enough novel for me.

Although my sense of unease grew as the otherworld element of the plot developed, it’s a testament to him that at no point did I want to put it down, to give it up. It had me in its grip, and would not let me go until it was done with me, much like the painting that Rose finds.

Written in 1994, its full of little period details, the birth of the audio book, life on the run before mobile phones, the cities that were still in the grip of the new and terrifying drug, crack cocaine. In its best moments it’s gritty, darkly real, showing us a world that is always down town, only this time ‘up close.’ And of course King can’t resist putting in one of his own creations, a “Misery” novel by Paul Sheldon, into the heart of the novel. It’s the novel that Rosie is holding when her husband attacks her and almost kills her, and it’s a novel that appears later on, when the woman who has been helping Rosie produces another copy and tells Rose the reason she reads these kind of romances, is because everything has an explanation, but in real life, often there is no explanation. Sometimes life is just bad.

A few years ago, I too wrote a novel about a woman running from an abusive marriage, who oddly enough was also called Rose, and during the writing of that book, I spent a lot of time talking to women who had fought their way out of those kind of relationships. King did a good job of inhabiting Rosie, of embodying a woman who went from abject fear to strength and independence. I would have liked Rosie to have found her courage on her own, to have not fallen love again quite so easily and openly, I would have liked her to have discovered her own hard edge within herself, and own source of strength without supernatural intervention.

As for her husband Norman, and his journey towards tracking down and punishing his errant wife, when she least expects it, he is a brilliant character. He is complex, terrifying, and the true depth of his depravity and capacity for evil is gradually revealed during the course of the book, making him even more frightening.

There’s quite a bit of coincidence in this book, early on. Rosie meets not only the love of her life, but her new boss and the magical painting in one moment. And its almost too easy, but I guess it has to be for King to move the plot in the direction that he wants. And here’s the rub, I wish he hadn’t done that. He is such a skilled writer, such a master at characterisation and world building that he pulls it off. But, for me, this book would have been brilliant perfection if it had simply removed the supernatural element, if it had been a straightforward thriller, with the dark shadow of Norman stalking ever closer to Rose as she struggled to get back onto her feet. The final confrontation between them would have been ultimately much more satisfying, if it had been Rose alone who found the strength face down Norman and a way to conquer him on her own terms.

But I guess that says more about me than it does about the book. I came to the book with my own set of hopes and agendas, and twenty years ago Stephen King had his. The world has moved on since this book hit the presses, the role of women in society, and crucially how they see themselves and their place in the world has fundamentally changed. A few years ago I began to read and marvel at King’s work again, most recently reading ‘Doctor Sleep.’ One of the things I love most about King is that he is a writer of the present moment. Yes, that dates some of his novels to an extent, but it also gives us a rare and intriguing insight into recent history that we think we remember, but don’t really. Its good to remember how different the world was twenty years ago from the way it is today, and to remember how hard we have fought for just a few inches of ground for the right to women to live a safe life without fear from abuse, to remove the stigma and shame attached to those living in an abusive relationship.

For me, Rose Madder is not a perfect Stephen King novel, but what it does do is grip you, right around the heart from page one, and keeps a tight hold until the very last page, when it finally lets your heart beat again. And it shows you once again, the master storyteller at work, one of those rare shamans that have been keeping us enthralled around the campfire, since the dawn of man. No one surpasses Stephen King, when it comes to spinning a good yarn.


Rowan Coleman lives with her husband, and five children in a very full house in Hertfordshire. She juggles writing novels with raising her family which includes a very lively set of toddler twins whose main hobby is going in the opposite directions. When she gets the chance, Rowan enjoys sleeping, sitting and loves watching films; she is also attempting to learn how to bake.

Rowan would like to live every day as if she were starring in a musical, although her daughter no longer allows her to sing in public. Despite being dyslexic, Rowan loves writing and her eleventh novel, "The Memory Book", was chosen as a Richard and Judy bookclub selection in 2014. Others include "The Accidental Mother", "Lessons in Laughing Out Loud" and the award-winning "Dearest Rose", a novel which lead Rowan to become an active supporter of domestic abuse charity Refuge, donating 100% of royalties from the ebook publication of her novella, "Woman Walks Into a Bar", to the charity.