Under The Dome, reviewed by Selina Lock 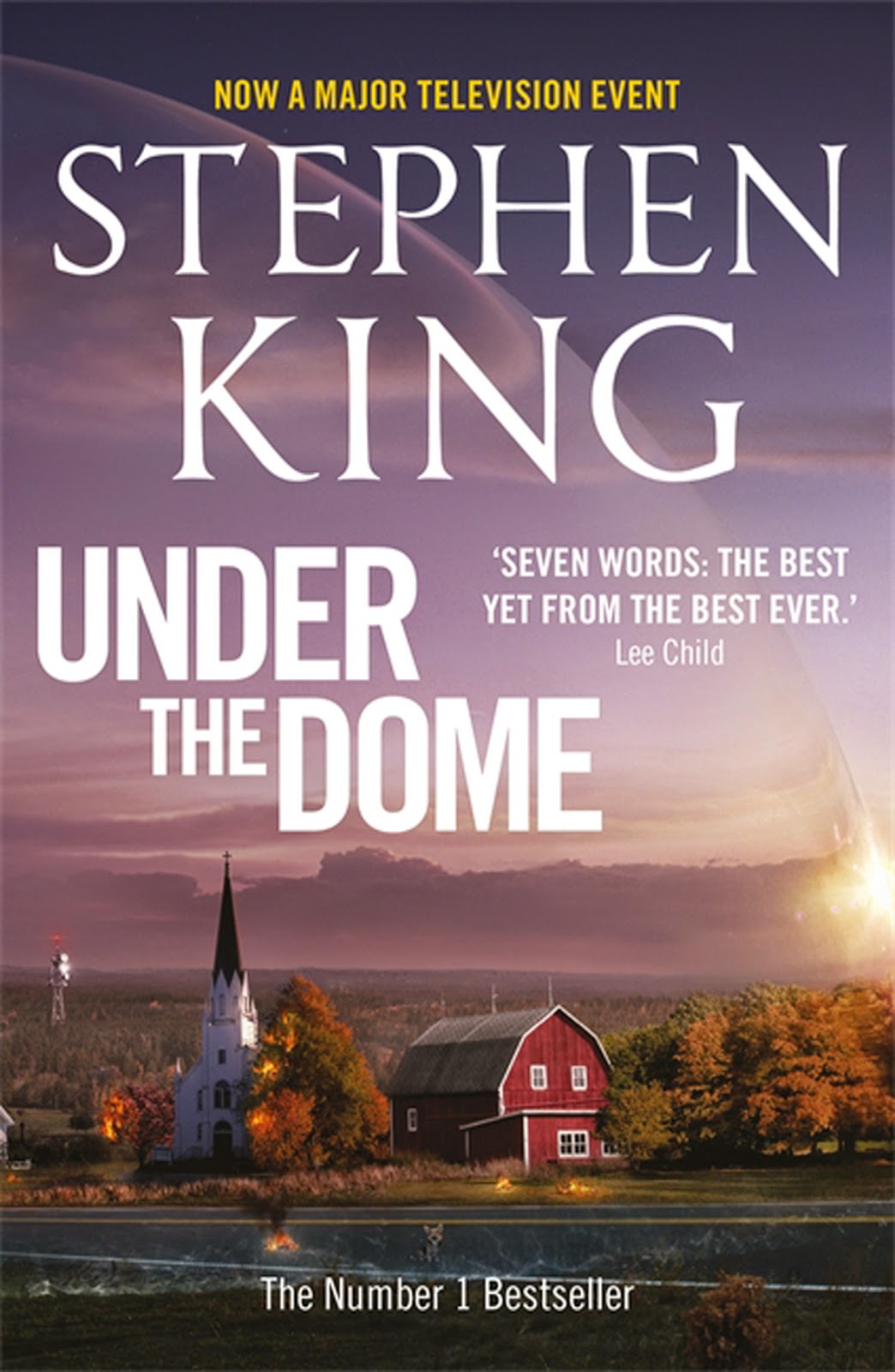 I've not read a lot of Stephen King, but I am familiar with many of the TV and film adaptations of his work. When the books were being allocated for this project I opted for "Under the Dome" because I'd seen the TV series and wanted to see how the book compared. The TV series has gone into "Lost" territory with stranger and stranger things happening with no explanations in sight, so I was intrigued to see exactly how the original novel ended, and what closure it might offer.

The American town of Chester's Mill is suddenly enclosed by an invisible dome of unknown origin, trapping the townsfolk inside. The initial hook and horror of the story comes from the multiple ways that people die on Dome Day, from crashing into the dome to the reaction the dome has on electrical implants. However, the bulk of the story revolves around the effect fear, power grabs, pettiness, religious fervour and politics has on the people trapped inside. Kind of like a small town "Game of Thrones".

King introduces a huge cast of characters, which contributes to the whopping size of the tome, which is over 1000 pages long. I'm glad I chose to read this on my ereader, as I don't think my wrists could have handled it! Due to the varied cast we don't get the sense of claustrophobia that many other 'base under siege' type stories give us, despite the town being largely being cut off from the rest of the world.

There's some excellent writing on show with King creating some memorable characters in Big Jim Rennie, his son Junior, Dale 'Barbie' Barbara and Julia Shumway among others. Big Jim is a used car salesman, power behind the local council and master manipulator, who doesn't want to admit that Junior is a dangerous and very troubled young man. On the opposite side of the fence (but not the dome) is Barbie, the ex-military short-order cook who suddenly finds himself re-conscripted and local 'in your face' newspaper editor Julia.

We also get a lot of characters, especially early on in the book, who only appear briefly and while they add to the flavour and breadth of the world of Chester's Mill their more detailed scenes are not strictly needed for the story. For this reason I did struggle to get past the first 300 pages of the book, which mainly dealt with Dome Day and threw a huge amount of stuff into the mix.

I also found I had to stop reading the book before bed because of some of the evocative but disturbingly violent scenes that inform many of the characters’ later reactions. Particularly what happens to a young woman when emergency recruits to the Mill's police force think they are above the law. After all, the courts, military and government are all outside the dome, so who is going to stop them?

Some of the scenes did pull me out of the book, as they seemed to jar with the overall writing style used. For example, a couple of scenes from Horace the beagle's point of view that has supernatural elements when the rest of the book uses sci-fi trappings. Plus, the narrator’s voice is always present, with hints about what happens in the future, there is one scene where it is intentionally intrusive, which just didn't work for me at all.

The central mystery of what caused the dome to appear weaves in and out of the central political power plot. It's always there in the back of the characters’ minds, as strange fits and visions assail some of the townsfolk. Towards the end of the book we do find answers to the mystery of the dome and we see the surviving characters attempts to find a solution. I know that some people were unhappy with the ending of the book, but it worked for me. King had sown the seeds that led up to it. Admittedly by this point I just really wanted the book to end and was determined to get to the end, as I'd invested over twelve hours of reading time in this story and characters!

Overall, I think there's a compelling story at the heart of "Under the Dome", but because of its length and complexity I would only recommend it to King completists or those that enjoy getting lost in slightly strange conspiracy thrillers.

I would have preferred a much more boiled down version of the story that kept a lot of the complexity, but lost some of the length!

For those still reading, and wondering how the book and TV show compared for me..... spoilers....

I think the TV show would have been far better as a mini-series that came to a conclusion, as the book provides a much more satisfying narrative arc in that way. The actors’ portrayals of some of the main characters did colour my mental images of the characters when reading the book, as I think they did a pretty good job with the material they were given.

Obviously, the TV show has a much smaller cast of characters, and some characters traits have been amalgamated. For example, the teenagers in the TV show have the fits that younger children have in the books. A lot of the main plot beats of the first two acts of the book are mirrored in some way in the first season of the TV show. For example the discovery of the machine/globe connected to the dome, the pink stars falling motif and Barbie being framed and threatened with execution by Big Jim. However, season two diverges completely and goes into crazy, crazy territory, which again brought to mind Lost and the way they just kept chucking more odd things and mysteries in every week to keep it going.

The whole tone of the book is much, much darker than the TV show. For example, Junior's treatment of Angie in the show is nasty (some violence and imprisonment), but in the book it turns into murder and necrophilia! The whole violent plot I refer to earlier, with the new police recruits is completely excised from the show, which is not surprising.

The one thing I think the TV show did well is the iconic image of the cow being bisected by the dome in the opening credits, as in the book we just get a bisected woodchuck.

---
Selina Lock is a mild mannered librarian from Leicester. In her alternative life in comics she edited The Girly Comic, is a comics writing tutor, helped organise the Caption comics convention and has written strips for various anthologies including Ink+Paper, Asteroid Belter: Newcastle Science Comic and To End All Wars: The WW1 Graphic Anthology. Her short stories have appeared in Alt-Zombie, The Terror Scribes Anthology, The Alchemy Press Book of Ancient Wonders and Iris Wildthyme of Mars.  Her novella Green Eyed and Grim is available from Manleigh Books. She is one half of Factor Fiction alongside her partner Jay Eales and their website can be found here. Her daily life is spent in service to the god Loki, who currently inhabits the body of a small, black, scruffy terrier.
at 09:00

Email ThisBlogThis!Share to TwitterShare to FacebookShare to Pinterest
Labels: Under The Dome