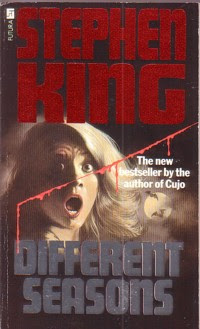 When I agreed to contribute to ‘King for a Year’ the first book that came to mind was, of course, The Stand. After all, the book has all the elements that usually pique my interest, an apocalypse and the eternal battle between good and evil. No surprise, I wasn’t on my own there and this title was already bagged. There is irony in that, my next choice - Different Seasons (1982) – was the book I read after finishing The Stand. I was sixteen and Stephen King was fast becoming my literary god. I have read the book several times since, as I am sure many here would have also done. So rather than give a long-winded synopsis of the teaching-the-reader-to-suck-eggs variety I will talk about the impact the stories had on me as an impressionable teenager all those years ago.

Rita Hayworth and the Shawshank Redemption (Hope Springs Eternal)
Andy Dufresne is a banker who has been wrongly accused of killing his wife. Sentenced to life imprisonment, the story tells of Dufresne’s long-game plan to escape this injustice by building a tunnel that is obscured by poster girls.

In truth, this story was not my favourite the first time I read it. It was by far the longest piece in the book and felt bloated and self-indulgent. My view of this has changed over the years. Sometime in the late eighties I came to the decision that I simply was not mature enough – either in age nor writing ability – to truly understand the true power of this tale.

Since then I see this story as a study in human endurance. Dufresne is wrongly accused and takes the full weight of injustice on his shoulders. Certainly in the early stages of the story the protagonist incurs a sense of hopelessness but this ultimately drives his desire to design his own sense of equity by choosing to escape. Along the way we see portraits of prison life and episodes of subversion as Dufresne empowers prisoners by helping them to understand their basic human rights. Even with its sense of quite triumph when Dufresne escapes to Mexico the story has at its heart a gentle warning of the impact of loss, be that physical or emotional. This message has stayed with me to this day and this tale often comes to mind when I consider this aspect of human endeavor.

Apt Pupil (Summer of Corruption)
A disenfranchised youth discovers that a Nazi war criminal lives in his town and goes to confront him. Rather than hand him over to the authorities, the youth insists that the Nazi recounts his deeds. Over the course of the summer the horrific experiences serve to trigger existing sociopathic traits in the youth, which manifest as a spate of serial killings of homeless vagrants. Finally, after killing his mentor, the youth goes on a five hour long shooting spree at a local college.

For me, horror is at its best when we fundamentally question man’s inhumanity to man. In this sense, this is perhaps King at his nastiest. There is clever subtlety to this tale in that, at one point, we actually feel sorry that the Nazi has to recite his terrible deeds and the guilt this incurs. It is fleeting but goes to show the hideous depths of what is, on the surface, a simple story of inhumanity and its negative influence on the susceptible. When I first read this in my teens, it was difficult to establish who was actually corrupting who and I realise now, this is the lynchpin for this remarkable tale.

The Body (Fall of Innocence)
A group of friends go on an expedition to find the body of a boy who has been hit by a train. As the group continue on their journey, what begins as a macabre curiosity becomes a poignant exploration into the finality of both youth and ultimately, life.

King’s truly remarkable tale of childhood’s end is, for me, the shining star in this book. Yes, Rob Reiner’s 1986 film has probably left its mark on me too, but I’d come to this conclusion during the first reading. As a teen, I immediately connected with this story, identified with the characters and their back stories. I can recall two of my friends calling me over to take a look at a dead fox that they’d found one day in a field. As I walked over towards them and waded into the long grass, I recalled this story and it made me pause for a few seconds. In that moment the fragility of the human condition and the perceived pointlessness of death washed over me in one hit. Powerful stuff; given more presence by my experience of this tale. King was to recapture the achingly beautiful concept of young friendships in the novel IT a few years later. But this story still rates as one of my all-time favourite King moments.

The Breathing Method (A Winter’s Tale)
At a gentleman’s club, a doctor gives an account of a woman who had been taught ‘The Breathing Method’ - a technique to help through childbirth. On the way to hospital during labour the women’s taxi crashes and she is decapitated, yet her head and lungs continue to breath until the doctor can deliver the baby.

This story tapped into existing fears I already harboured. I loathe the idea of being decapitated (it is a central point of my story Witch’s Brew in Campfire Chillers) not because of the obvious fatality but the concept that the brain doesn’t die straight away. A few weeks before reading this tale I had re-read James Herbert’s The Fog where a prominent decapitation had featured in the narrative. The Breathing Method compounded this – and then some! However, it would be all too easy to write The Breathing Method off as a grisly tale designed to add extra chill to a winter’s evening. Far from it, I feel. I’ve always seen it as a story about life rather than death. The mother’s desire to give her child to the world is one of hope, not despair and it is this element that makes The Breathing Method a story of perpetual emotional contradiction every time I read it.


In his afterword, King makes clear that Different Seasons is four novellas brought together under the auspices of convenience; given their length the stories were difficult to place at the time, so bringing them together made some kind of sense. For me this madcap, literary alchemy didn’t only make sense, it also creates one of the most powerful literary experiences that has remained with me to this day.

Dave Jeffery is creator of the bestselling NECROPOLIS RISING SERIES and the critically acclaimed adventure/mystery series for Young Adults: BEATRICE BEECHAM. His CAMPFIRE CHILLERS collection has also been longlisted for the prestigious EDGE HILL PRIZE, 2012. The short story Masquerade was nominated for the Horror Society's IGOR AWARD and Jeffery is the screenwriter of multi-award winning short film ASCENSION (based on his short story).  FINDING JERICHO, his contemporary mental health novel, has been endorsed by MIND and features on the BBC Headroom recommended reading list.

Jeffery is a member of The Society of Authors and The British Fantasy Society. He is also producer at award winning Venomous Little Man Productions Ltd and can be found online at his website.
at 09:00