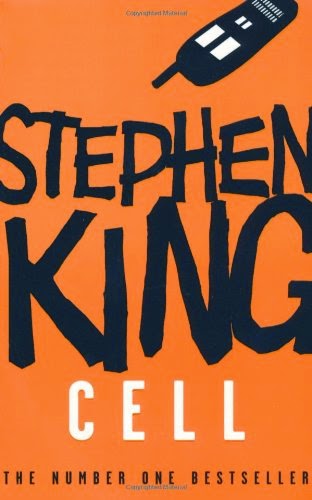 I first read Cell not long after the book came out in 2006, based on the word that King had returned to his horror roots and had written an all-out zombie novel.

I was more intrigued by King mining the horror coalface again, rather than the subject, since zombie fiction is usually a hard-sell for me. Most of the time the media bombards us with stories that imply apocalypse is immanent, so I'm often reluctant to include more end-of-the-world scenarios to pep up my occasional 3am insomniac imaginings.

Re-reading Cell has been an interesting experiment since it's rare I have the time to revisit a novel. The first thing I noticed is that I remembered the beginning of the novel better than the ending.

The protagonist of the story is Clayton Riddell, a 30-something comic book artist who is in after just signing a deal for this first graphic novel. He doesn't own a cell phone (slightly more believable in 2006 than now), but while returning to his hotel he witnesses several people suddenly transform into ravaging homicidal attackers after they received a call on their cell phones.

They are victims of 'the pulse': a mind-wiping programme, created by unspecified perpetrators, which is delivered via a cell phone, and strips out the memories/identity/conditioning of the person who hears it, until all that remains is the primal core of the oldest part of the brain. Within a short time the city has been devastated by the rampaging hordes who attack, bite, gouge, and destroy anyone they see. Planes fall out the air, trains crash, cars and boats pile into each other, and explosions rip through the city.

Clay befriends other people who are trying to cope with, and hide from, the outbreak: Tom McCourt a middle-aged gay man who was near Clay when the epidemic broke out, and Alice Maxwell, a teenaged girl who saw her own mother turn into a murdering beast.

After regrouping the trio determine to head out of and into the nearby suburb of , to Tom's house. But Clay has his goal fixed firmly in his mind: he must get to his home in Kent Pond and discover what's happened to his family. Like other King protagonists, Clay has a shaky marriage (he's separated), and a young boy called Johnny whom he adores. His primary goal, and thus the goal of the book, is to reconnect with his son no matter what.

Much of what happens next is a description of society's threads being pulled apart as the group journeys the ten days it takes to arrive at Clay's front door. Plus, there's the change in behaviour of those who have been mind-wiped.

The 'phone-crazies' or 'phoners', as they are referred to, start to 'flock': moving in coordinated groups during the day to forage for food, and sleeping together during the night. They begin to help each other, and act in a caring fashion. However, if they see any of the unaffected people they immediately tear them apart, which makes the daytime off-limits for normal people. Worse, they begin to exhibit other talents: telepathy to communicate with each other, and the emergence of a hive-mind that bends its collective will towards survival.

The change in the phoners is most apparent when the trio arrive at , a boys' school, which is only staffed by a former student, 12-year-old Jordan, and the acting headmaster of the Academy, Charles Ardai.

Jordan and Charles show the group the academy's soccer field, which is now the roost for over a thousand of the mind-wiped during the night. They see more evidence that the phoners are acting in coordinated ways and are gaining stronger powers.

is a computer geek, and posits that after the pulse's mind-wipe that the consciousness software is now rebooting, but with a different set of programming, perhaps with elements that have been lain dormant for a long time. They agree it would be best to strike at the phoners before their new programme is fully installed, so they decide to burn as many of the affected people as possible.
The group initiate their plan, and make a pyre of the bodies. Yet, there is an awful response:

"That was when the cry rose, only now it wasn't coming from Glen's Falls or ten miles away. It was coming from right behind them. Nor was there anything spectral or wraithlike about it. It was a cry of agony, the scream of something - a single entity, and aware, Clay was certain of it - that had awakened from a deep sleep to find it was burning alive."

In their dreams the hive-mind contacts them, using a new figurehead, a young black man in a Harvard hoodie who Clay refers to as the Raggedy Man because of his disfigured face (most of the phoners are injured from their initial bout of undirected madness). They mark Clay, Tom, Alice, and Jordan as untouchables among the normal people, and then execute everyone else in the area as a lesson to the four. Plus they demonstrate their new ability: mind control. They force Charles to commit suicide in a gruesome manner.

The dispirited quartet travel to Kent Pond and Clay discovers via a note that Johnny is alive, but his estranged wife has been wiped by the pulse. As they hurry to catch up with Clay's son the group of four are avoided by everyone else, and the mind-wiped order normal people to guard their sleep. The hive-mind continues to demonstrate its abilities to those that resist them.

The cell towers still work, so the hive-mind bend their will to make normal people pick up phones and dial emergency services so that new people are wiped by the pulse. However, the newly-affected aren't behaving in the same fashion as the original group, and it's suspected that there is a glitch in the software that is now causing the wipe to happen in a haphazard fashion, with erratic results.

There is also a moment of terrible loss when is killed in a random violent act. It's the kind of poignant tragedy that King is very savvy at positioning in a story to remind us of the fragility of life.

The group discover another three people (Dan, Denise, and Ray) who also killed a nest of phoners, and they realise that they are all being herded into one place, called Kashwak. They believe that they are going to be slaughtered in front of the largest group of the wiped as an act of justice.

Via communications in dreams Clay believes his own son has been a late addition to the mind-wipe, so he doesn't try to resist heading to Kashwak, but the rest of the group strike out for the north: only to have their minds used against them and they end up travelling to the required destination anyway.

While waiting in a holding cell in Kashwak, certain they will be executed in front of thousands of the mind-wiped, the group stages a daring attack upon the sleeping droves and win their escape.
Clay leaves his new family of friends, and sets out to find his son, who indeed has been badly affected by the wipe.

The story ends as Clay decides to gamble on a desperate method to see if he can jolt his son's mind back into its old programming.

The strongest element to Cell is its central idea of weaponising mobile phones, and how the maddened humans stripped of all personality by the wipe evolve into a new collective entity wielding psionic powers.

I was reminded quite a bit of The Stand because of the apocalyptic landscape and the Raggedy Man who represents the force arrayed against the protagonist, as well as Salem's Lot because of the band of people striking at creatures with an overpowering will (with the day/night restriction flipped). Yet both of those books hit harder because the first one features a bigger group of better-rounded characters with a longer narrative breathing space, and the latter has a tighter group of better-rounded characters fighting a singular monster.

For me the story loses much of its urgency after the episode, when is murdered (which while an effective device to sucker-punch the readers, ends up feeling like a betrayal of the only active woman character in the book). The addition of another three people at this point upsets the character dynamics of the story and at no point did the new characters carry significant emotional impact to the narrative (the man function of Ray is as a plot point). The resolution of the conflict between the collective mind-wiped and their opponents contained few surprises.

What really impressed me was the opening section of the book, where within ten pages King is spilling blood on Boston Green and unleashing havoc in spectacular, grisly sequences. There's a terrific energy and intrigue at the start, as the wipe begins, society breaks down, and the zombies among us begin to change into something no longer mindless, but instinctually cunning, and able to mobilise their strength as a united front. Unfortunately, the book's pace increasingly winds down as the group walks through the countryside in the latter half of the book.

There is something safe about the characters and a contrivance to how the story plays out, which belies its frenetic starting sequence and central idea. Yet King is a master at storytelling, with a flowing style that encourages you to keep reading. Even if you shift in discontent, you are likely to remain in your seat, turning pages until the end.

Stories about catastrophe usually depict a collapse in morality as a consequence of the collapse of society, and this story also taps into the fear that your friends or family can be turned against you, which is at the heart of the fiction of transformed people (zombies, vampires, werewolves, pod-people, etc.). It doesn't seem coincidental that this novel was formulated and published a few years after the devastating events of 9/11.

What's also noteworthy about Cell is that the people who are wiped of individuality fall into a community of minds whose growing instinct is to protect each other to survive. The hive mind determines it is Clay and his friends who are insane, and need to be excluded for the protection of the greater good. Individuality is barbarism to the connected souls - which is anathema to the deep-seated American narrative that lauds the rugged loner who achieves his ambitions despite overwhelming odds and the actions of a callous authority.

What's never explored is whether those who later get the opportunity to be wiped of a separate identity really resist the pull, or if they embrace the chance to be part of an absolute commune of hearts and minds.

-----
Maura McHugh is a life-long horror fan and writer living in the West of Ireland. She wrote Twisted Myths and Twisted Fairy Tales, two prose collections published in the USA. She's also written the comic book series Róisín Dubh and Jennifer Wilde for Atomic Diner Comics in Dublin, contributed to IDW's Womanthology anthology, and co-wrote Witchfinder: The Secrets of Unland with Kim Newman for Dark Horse Comics in the USA. As well as this she has written in a variety of media including film and theatre, as well as being a judge for a number of literary and film awards.

You can find her online at http://splinister.com or @splinister on Twitter
at 09:00

Email ThisBlogThis!Share to TwitterShare to FacebookShare to Pinterest
Labels: Cell