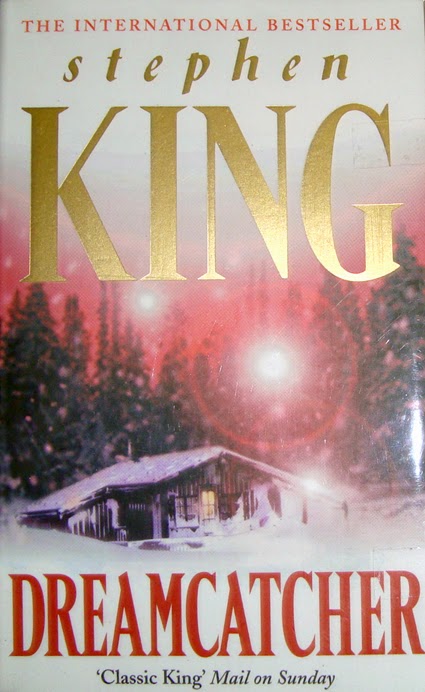 One of the nicest things about having children is watching them grow and spotting the touches of my own personality in them.  Okay—I admit that I’ve seen a few of my less desirable traits pop up in one or the other of my sons, but I’ll limit this review to one that makes me look good, which is the way they love a good story.

My oldest son, Brian is a voracious reader and always has been.  By the age of 9 he read at a high school level.  By high school, we were sharing books.  At the age of 17 he plopped a book called, “Dreamcatcher” by Stephen King on the corner of my desk and informed me that I had to read it. Five years later, I pulled it out of the tower of “to read” books that threatened to overtake my desk.

King wrote “Dreamcatcher” between late 1999 and early 2000 after the accident that nearly killed him.  I imagine when King discovered he couldn’t sit for the long stretches of writing time he used to he probably had to relearn how to write—a pre-accident act that must have been almost as unconscious for King as breathing, judging from his prolific output over the years.

The accident is all over this book.  Jonesy, the academic of the group has recovered enough from a car accident that broke his hip to join his friends on the yearly hunting trip at Clarendon family cabin, Hole in the Wall.  There’s pain and discomfort sitting for Jonesy…and anyone unlucky enough to carry a shit-weasel in their bowels.

This is a tale of four boys who, in the finest moment of their lives save Duddits, a Down’s Syndrome boy, from the tortures of the high school football star and his friends.  This moment ties the boys together for the rest of their lives.  Like the four points of a compass, they travel in different directions as adults, but Duddits ties them at the center.  Duddits is special.  He sees the line.  After the boys help him, they can see it too.

This connection to the line makes the boys powerful in ways they didn’t expect.  On their first hunting trip, the boys dream Duddits’s bully into a deadly car accident.  But the line isn’t all bad; they use the line for good too.  They use it to rescue Josie Rinkenhauer and to return her to her family.

The boys become adults, and go off their separate ways, reuniting yearly for the hunting trip.  This year, aliens land in Jefferson Tract during the trip.  Beaver and Pete are dead upon their first meeting with the shit-weasels.  Somehow, the “otherness” that is their gift from their connection to Duddits keeps Henry and Jonesy alive.

“Dreamcatcher” features several of King’s favourite themes; the bond of childhood friends, the journey tale, and good versus evil.  Dickensian in the scope of its cast and sets, “Dreamcatcher” comes together at the end to tie up all the loose ends in a victory over the most threatening of the aliens, Mr. Gray.

After I read the book, I asked my son what his most and least favourite parts of the book were.  Interestingly, they were the same: Beaver’s death scene.  It is sad to lose such a great character, but at the same time, the character stays true to form and is compelled to do the very thing he knows he shouldn’t do, but he can’t help himself.  It’s brilliant because it ties inner and outer motivation together so well.  He can’t help himself overcome the compulsion and that becomes him not being able to help himself against the monster.

This theme of control runs throughout the novel.  They boys control the line for good or bad.  Mr. Gray tries to control Jonesy.  Jonesy tries to control Mr. Gray and does inadvertently by introducing him to the delicacy of bacon, for which Mr. Gray can’t control his compulsion.  Kurtz wants to control his troops, especially Underhill.  Henry tried to control his own death through the first half of the story, waiting for the perfect moment for suicide and in the end, he fought to stay alive.

The arc of Henry’s internal struggle with the when and the how of suicide only to commit to life was my favourite part.  He chose the path his patient Barry couldn’t.

Some things just are inherent, as much as we wish they weren’t.  I’m glad my son has picked up my love of books, and I’m thrilled he and I share the same taste.  Sadly, we also share the precarious piles of books littering every room.  There’s a very strong chance our books are like Beaver’s toothpicks and the best I can do is hope that the compulsion doesn’t end us both.

The prognosis on this last part is pretty bleak.  Immediately after reading “Dreamcatcher”, I added “It” to the pile so that I could revisit Derry and its mysteries.  The book pile didn’t get smaller, but I guess it’s not totally out of control either—or more accurately, yet.


Kim Hoelzli lives outside of London Ontario with her husband, grown sons and a half-blind granddog.  She is currently working on a novel about an LSD based nature commune set in the depths of the Northern Ontario.
at 09:00

Email ThisBlogThis!Share to TwitterShare to FacebookShare to Pinterest
Labels: Dreamcatcher