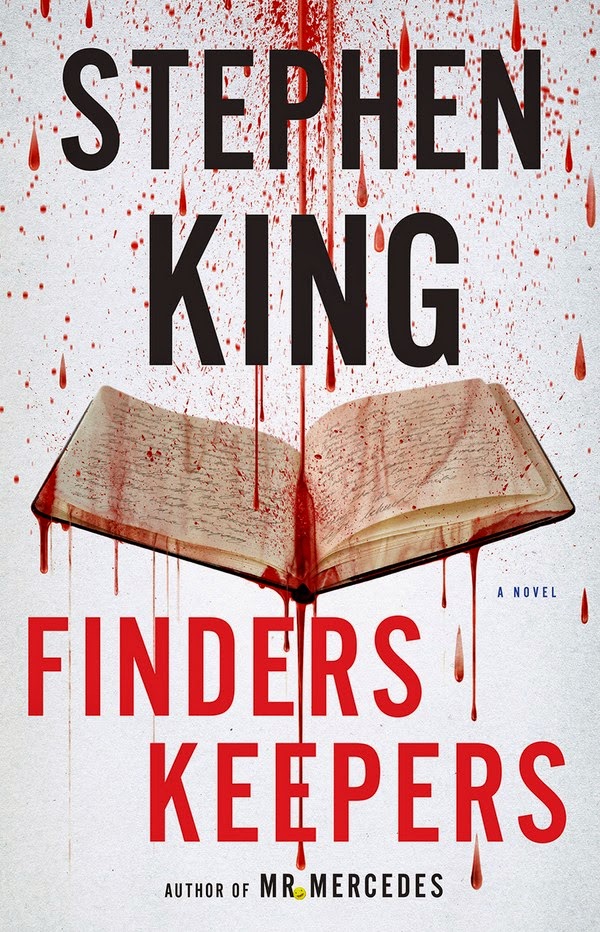 It may come as a surprise to you to learn that my favorite genre is crime fiction. Because of how much I’ve written about Stephen King, people generally assume I’m a huge fan of horror. Truth is, I don’t read much horror these days, I don’t particularly care for scary movies, and most of the fiction I write tends toward the crime genre, even when it’s nominally something else.

So I was delighted a few years ago to learn that King was trying his hand at a straight crime novel. This wasn’t his first foray into the genre - he has a significant collection of non-supernatural short crime stories. He once took a stab at writing a novel featuring Lord Peter Wimsey, and he’s written a Sherlock Holmes tale. He also wanted to do a final Travis McGee novel, but John D. MacDonald’s estate turned him down. (“Finders Keepers” is dedicated to MacDonald.)

In the past, King has taken an interesting approach to crime novels. His two Hard Case Crime books, “Joyland” and “The Colorado Kid”, both of which contain supernatural elements, were less about the solution of a mystery and more about the essence of mystery. “Mr. Mercedes”, the first book to feature retired police detective Bill Hodges, had the obligatory sociopathic villain, but rather than make him a master criminal, King created a monster who makes mistakes. His nefarious schemes go wrong, as did those of Randall Flagg. And Hodges was a flawed investigator. His mistakes cost lives, and he doesn’t get on the right trail until it’s almost too late.

Even before “Mr. Mercedes” came out, King had decided he wasn’t done with this fictional world. There would be three books, but the unifying element would not be the detective or the villain, as is often the case with series, but rather an incident: the City Center Massacre of 2009. Brady Hartsfield stole a car and drove it into a queue of job-seekers, killing eight and injuring dozens. Everyone there that day had a story, as King so deftly demonstrated in the prolog to “Mr. Mercedes”, and the survivors had an aftermath.

The first book was about catching the “perk” responsible for that heinous crime, but Brady Hartsfield is only a shadowy presence lurking in the background in the follow-up. Understandably so: he was left in bad shape at the end of “Mr. Mercedes”. Not dead, but not much of a threat. Or is he? Only time will tell.

Surprisingly, “Finders Keepers” does not start with Bill Hodges. In fact, over 150 pages pass before he shows up. The first half of the book is the necessary foundation that leads up to the fast-paced thriller that is the second half. King introduces readers to Morris Bellamy, a brash hothead who resents his favorite writer for the way he treated his iconic character, Jimmy Gold, in the final book of a trilogy. Like J.D. Salinger, John Rothstein had long retired from the public eye and from publishing, but Bellamy is convinced he hasn’t stopped writing. He may even have penned another novel that will salvage the protagonist’s reputation. So, in 1978, Bellamy and two other goons invade Rothstein’s home. They find plenty of cash but also scores of handwritten ledgers tucked away in a safe.

Before he has a chance to savor his discovery, Bellamy is sentenced to life in prison for an unrelated offence. No one knows of his involvement with the Rothstein affair. However, what’s buried often rises to the surface again. A thirteen-year-old boy, Pete Saubers, stumbles upon the hidden treasure thirty years later. Finders keepers, as we used to say on the playground when we picked up something another person lost.

Pete’s father was seriously injured at the City Center and the family is nearing the breaking point, financially and emotionally. Pete doesn’t know anything about Rothstein, but the thousands of dollars in the trunk he discovers can help the Saubers through their tight situation.  He finds a clever way to deliver the money to his parents without having them worry that it’s illicit. It takes longer to figure out the importance of the manuscripts, which could be worth millions. But he’s just a kid—even as a high school sophomore, he doesn’t have the wherewithal to convert them into money. And the first person he tries to sell them to is as unscrupulous as they come.

Four years after bringing Brady Hartsfield to justice, Bill Hodges is working in Travis McGee territory, getting things back for people. Most of his work involves repossessions, so he doesn’t get to keep 50% like McGee did. He’s not quite a private detective, though he operates as one sometimes.

Pete’s younger sister is friends with Jerome Robinson’s sister—Jerome being Hodges’ young friend who helped catch Hartsfield—and she’s worried that Pete is in serious trouble, so she asks for Hodges’ assistance. It’s amusing to realize that Hodges has no idea what he’s gotten into until mere hours before the climax. He and his assistants know there’s suspicious money involved, but little more.

In part, “Finders Keepers” is about books, writers and writing. Why do some authors become part of the literary canon and others get forgotten? Morris Bellamy has the same belief as did Annie Wilkes in “Misery”: the author of his favorite books owes him something, especially when the story takes a turn he doesn’t like. He castigates Rothstein for disrespecting Jimmy Gold, who is more real to Bellamy than most people. When given the chance to find out what’s in the ledgers, he succumbs to temptation, like King Shahryar in the tale of “Scheherazade”.

Bellamy isn’t quite as demented as Hartsfield, and he’s decades older than Hartsfield in 2014, but he’s no less volatile and dangerous. Pete and his family stand in the way of Bellamy’s obsession, and he’ll stop at nothing to get his hands on those manuscripts. Pete is ill-equipped to deal with him—so it’s up to Hodges and his rag-tag team of irregulars to save the day, if only they can figure out what’s going on.

King knows how to keep the pressure on his characters. “Finders Keepers” is perhaps best described as a thriller, especially in the second half once Pete Saubers gets in over his head, but King never sacrifices characterization in favor of plot. Pete’s predicament is all the more compelling because by the time the shit really hits the fan, readers know and care for him. And it’s good to visit again with Bill, Holly and Jerome, to see how they’ve changed in the past four years. Holly Gibney has especially flourished now that she works with someone who respects her.

In the final chapter, King lays the foundation for the as-yet unnamed third and final book in the series. I for one can’t wait.

Bev Vincent has been writing News from the Dead Zone for Cemetery Dance magazine since 2001. He is the author of three books, including “The Stephen King Illustrated Companion” and, most recently, “The Dark Tower Companion”. In addition to essays, book reviews and interviews, he is the author of over seventy short stories. He has been nominated for the Bram Stoker Award (twice), the Edgar Award and, this year, for a Thriller Award from the ITW.

You can find him online at www.bevvincent.com or @BevVincent on Twitter
at 09:00