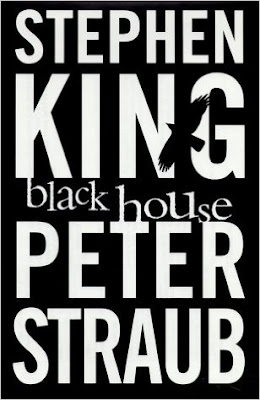 So, this review is very late.

Originally I read this back in May, just before I moved house and life got too awkward for me to be able to sit and write the review; by the time I was finally organised enough to write, the book was no longer fresh in my mind.  So I decided I had to re-read it, how hard could it be?  I'd loved the book just a few months earlier.

"Black House" is a sequel to "The Talisman", and when I read it for the first time I didn't know that.  I decided that I would try to re-experience it the same way, by not reading "Talisman" again before I reviewed it.

I did not expect that I would be reading the same book twice to bring you my thoughts.

Part of the reason this has taken so long is that "Black House" opens with almost one hundred pages of omniscient narration that introduces us to the major players in the story to come, but delivers very little in terms of plot momentum.

Back in May I was in love with this, the tiny vignettes of people I had forgotten and a great way to get a feel for the world.  These last two months, that opening has been the brick wall between me and the story.  I remember everyone this time, fun as it is to be reintroduced to Henry Leyden, the sheer slowness of the scene setting actively turned me away from the book.

As I got to the end of the book quite some time later, I found myself drawing parallels between the opening of the novel and the titular Black House.  It had felt like it was pushing me away, making my eyes slide across the words, making me work extra hard to get past the barrier to what I wanted to get at.  Its a strange thing to think of a novel channelling the power of its dark heart to keep you from the story it contains, but that's where my thoughts turned to.

Finding the opening a slog, I would try every so often, just a little nibble at a time, making my slow progress forward.  I was absolutely regretting needing to reread it and the size of it didn't help.  This is not a slim book, while smaller than much of King's later output there's a hefty investment required.  I tried to skim read, just let it be a refresher, but even though the slowness was off-putting, the writing was still strong enough to make me force every word into my head.

Then, suddenly, I was past the introduction and as the story gathered pace again, I found myself drawn in again, quite happily to this world.

For me, every time, it is the character of Henry Leyden that brings the greatest joy.  I can't say he is a unique character, but he just works, I can see him and hear him, all of his hims.  Which, as he is a blind man with several voices, warms my heart.  Because this is a novel of characters first and plot second.  Without all of the time spent deepening the characters, this could have been half the size and would have been nowhere near as enveloping.  While Jack Sawyer is a fine man to spend time with, he has never held my attention as much as those characters that swirl around him, Beezer, Doc, Mouse, Judy, Sophie, Wendell, Dale, the 'Mad Hungarian'.  They are all given time to breathe.  Even characters long dead get plenty of page time to make themselves feel real.

It was only on this second reading that all this became clear to me.  If I had written this review earlier this year I would talk about the sense of dread in the town, the sadness I felt at two deaths which I have remembered ever since my very first reading a decade ago.  But I wouldn't have been so consumed by the characters as I am now.

This is why I think it took me so long to get through the opening.  All I had remembered about the book was the plot, but the opening sets out its stall quite clearly.  This book is not about the plot.  When I didn't start with the book I thought I remembered, my brain let it slide away, some slippage seeping out of French Landing and into my world.  Once they became alive in my mind, once they started to act, that's when Black House had me firmly in its grip.

So then, what's this book about?  It seems a very simple set up, in a small town in Wisconsin, children are being murdered.  The local sheriff is out of his depth, the town is terrified.  The sheriff wants a friend of his, a star LA detective who has retired in the town, to assist with the case.  It sounds like a standard small town thriller, doesn't it?  But it isn't.  The killer is revealed very early on and the reasons behind his spree and neither standard nor natural.

The investigation of the crimes mostly takes a backseat to developing the characters.  However, it also takes a place behind the real story of the murders which cannot be contained to a simple murder investigation.  Tying in, as it does, with the worlds of King's Dark Tower, there are powers at work in this town and on Jack “Hollywood” Sawyer that take us out of the common serial killer and into the fate of worlds.

This mixture just works, the everyday is our way in, but the extraordinary is seeded early on and then built upon.  This isn't a book that changes gear halfway through and makes you realise it was a different kind of story all along.  Instead it draws you in, using the term “slippage” to get you in the mood for what's coming.  While the story doesn't exactly end with a twist, its resolution isn't one you are likely to guess at early on.

Now that the house is gone and the story is done, where do I want to go?  I will certainly be reading "The Talisman" next, its sat right next to me as I type.  After that, I think I will follow the threads dropped into the book in its final charge to The Big Combination and revisit Roland and "The Dark Tower".

Robert Spalding is an occasional writer and full time pack leader of five small dogs whose work has been published in Terror Tales of the Seaside and Sharkpunk.  His dogs can usually be found asleep or charging about the garden.  He sometimes blogs at robspalding.wordpress.com and tweets a bit at @robspalding
at 09:00