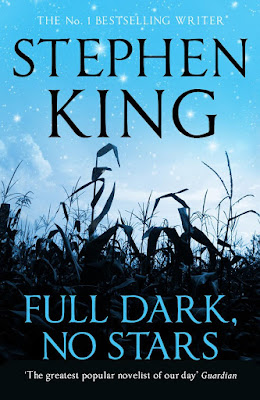 "I have no quarrel with literary fiction, which usually concerns itself with extraordinary people in ordinary situations, but as both a reader and writer, I'm much more interested by ordinary people in extraordinary situations. I want to provoke an emotional, even visceral, reaction in my readers."
Stephen King, in his Afterword to "Full Dark, No Stars"

I confess that, for a few years, I became an Inconstant Reader. Like many of the reviewers here I spent my adolescence reading classics like Carrie and The Shining under the covers by torchlight - but sometime in the late nineties I stopped reading Stephen King for a while.

And then along came "Full Dark, No Stars".

When I first picked it up and read the blurb, I knew the book had everything going for it. Early press heralded a return to the dark side of King's earlier stories, and the atmospheric cover art placed the reader alone in a cornfield, gazing up at the cosmos. The title is so evocative of that glorious feeling of dread you used to get as a teenager when you opened up a 'forbidden' tome for the first time. And it is that feeling which permeates each and every page of this astonishing volume.

Each of the four stories within (plus a bonus fifth, ‘Under The Weather’, if you grab a later paperback copy) deals in some way with love, loss and retribution. The opener, '1922' is a first person account of a farmer's downward spiral that sees him murder his wife and toss her body into a well. The desperation of rural life is so well depicted here it is little wonder that King cites (in his Afterword) period photographs as an inspiration for his tale. Black humour punctuates the heady tension and animal life mirrors the mental, emotional and physical states of the protagonist. Wilf bringing his cow into the house is gleefully bonkers – ‘Grapes of Wrath’ by way of ‘A Squash and a Squeeze’ - and "Why the hell not?" as the farmer narrates.

'Big Driver' goes to some very dark places indeed, via the rape revenge story of a crime writer who suffers an ordeal so horrific that she turns to violent retribution. Head-wound hysteria drives the tale on, and black humour siphons off a little of the tension as King gives memorable voice to the author's sat-nav and characters from her books, all of whom give counsel as she plots her revenge. That bitter humour is the story's saving grace, making the harrowing ordeal and its primal aftermath just palatable enough for you to turn the page - just. The inclusion of a fellow survivor character is an arch move on King's part, leading to an empowering and moving coda that will stay with you long after you have finished reading it.

'Fair Extension' takes that old genre staple - the Faustian pact - and gives it a fresh spin. As Elvid (what 's in a name?) himself says, "This isn't some half-assed morality tale" and it really isn't, going deep into the truth of human nature with tongue firmly in cheek. The 'be careful what you wish for' premise builds into a piece of satire that shows King at his most playful, even riffing on the idea of a 'magic pill'. I can't tell you how annoying it is as a writer to see King take every trope going and then shake them up into something entirely original - but it is a pleasure to read. The story races along (via the brilliant device of historical headlines and pop culture scandals) to a subtle, bittersweet ending that has powerful resonance. What anchors this piece is that no matter how extraordinary the premise - the character, his actions and reactions are utterly believable. This aspect is a rich seam that runs through each of these stories.

'A Good Marriage' is the crowning glory here. In a set-up that seems effortless, King introduces Darcy and Bob, the perfect American couple. He then eviscerates them and their cosy little marriage with a series of revelations that will make your heart pound and your head spin - along with the protagonist's. Dirty little secrets give way to monstrous truths and a brilliantly executed, quiet reversal on the fight for survival before that visceral climax. A beautifully realised finale shows King in total command of his structure, reflecting the white picket fence illusion of perfection from the opening but this time through the emotional change the character has experienced - and we with her.

Each story celebrates the exploration of 'ordinary people in extraordinary circumstances' (a concept that King expands upon in his wonderful how-to memoir On Writing) and by making their actions believable, draws us into their narrative, no matter how harrowing. This framing of horror in the everyday equals the very best of Edgar Allan Poe's work. The stories are that unflinching, that dark - and that good. Little wonder, then, that King was awarded the Bram Stoker Award for Best Fiction Collection in 2010 for "Full Dark, No Stars". Each tale offers a glimpse into the horrific, driven all nightmare long by the fragile beat of an all too human heart.

"Full Dark, No Stars" is enough to make Constant Readers of us all.

Frazer Lee is a novelist, screenwriter and film director. His debut novel "The Lamplighters" was a Bram Stoker Award® Finalist for Best First Novel. His other works include "The Jack in the Green", "The Lucifer Glass", "The Skintaker", and "The Leper Window". Frazer’s movie credits include the award-winning short films "On Edge", "Red Lines", "Simone", and the critically acclaimed horror/thriller feature film and movie novelization "Panic Button". Frazer lectures in Creative Writing and Screenwriting at Brunel and Birkbeck Universities in London, UK. He resides with his family in Buckinghamshire, England just across the cemetery from the actual Hammer House of Horror.

Email ThisBlogThis!Share to TwitterShare to FacebookShare to Pinterest
Labels: Full Dark No Stars