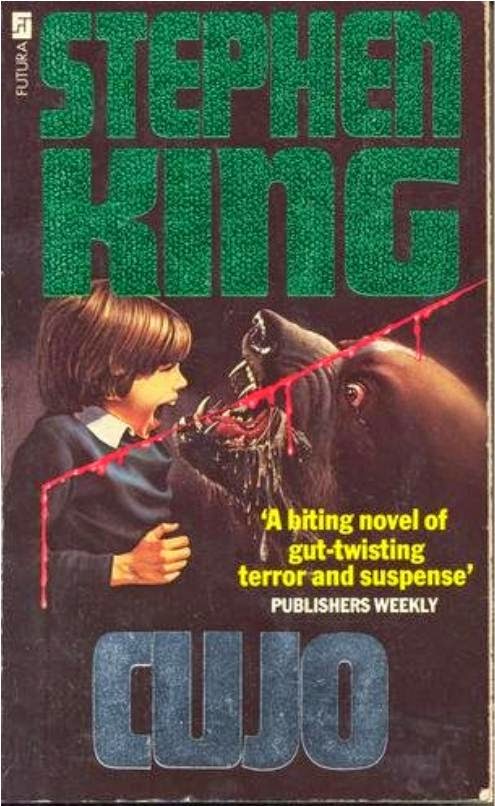 ...She paused on her stoop, looking at a sky which was still spring-pure and pastel soft. Oh, but she sensed it coming: something hot. Something foul.

I love dogs. Especially big dogs. My first babysitters were my parents’ German shepherds, gentle giants who watched over me when I was tiny and vulnerable. I grew up surrounded by animals of every description, but the dogs were always my best friends. I felt safe with them. They would always protect me, never hurt me. Never.

Ah, but the Master of Horror knows how to exploit your trust, knows how to turn your best friend into your worst nightmare.

This is a criminally overlooked and underrated little gem of a novel (and a cracking film too). It’s a book King claims to have little memory of writing due to his drug and alcohol abuse at the time, which just goes to show that nothing keeps a good story down. It’s a classic novel by a master storyteller at the height of his powers.

There are other “good dog gone bad” stories out there but none of them approach the level of horror in "CUJO". I’m a sucker for unhappy endings, but King actually disliked the absolute bleakness of this one so much he asked director Lewis Teague to change it in the film adaptation. Neither version of the ending alters the central story, though, and what gives the book so much power for me is not the plight of the human characters so much as that of Cujo himself. King gives us several scenes from Cujo’s point of view that show the pain and madness swirling through the poor dog’s mind as he gets sicker and sicker. From the moment he is bitten, we know he is doomed. It’s inevitable and terrible. And it’s absolutely heartbreaking.

He was a Saint Bernard in his prime, five years old, nearly two hundred pounds in weight, and now, on the morning of June 16, 1980, he was pre-rabid.

King has always done madness well and in "CUJO" we get a different sort of madness. Watching the disintegration of Cujo’s sanity and health is painful but watching man’s best friend become a killer is even worse. There is the familiar King theme of the monster terrorising isolated victims, but this particular monster (Cujo) is at the mercy of his own monster (rabies). Events spiral horribly and relentlessly out of control and, as the situation grows ever more desperate for Donna and Tad, they turn inevitably tragic for Cujo.

I was about ten when I first read the book. I had taken it to school with me and was reading it during lunch. One of the other girls said there were dirty parts in it, so she passed it around (yes, girls do that too) until they found the rude note Steve sends to Vic about screwing Donna, the one that mentions the mole above her pubic hair. I remember it vividly because I didn’t know what pubic hair was and the girl who read it aloud called it “public hair”. Weird the stuff that sticks in your head, isn’t it?

The girls also read out some gruesome tidbits they came across, with elaborate shudders and noises of disgust. I was fascinated and horrified, eager to get my book back and experience those parts of the story for myself, but also afraid because I couldn’t help but imagine our loving family dogs succumbing to the same dreadful fate as Cujo. And the book didn’t disappoint. Tad’s “monster in the closet” scared me, and Cujo scared me, but more than anything, the disease scared me.

That terror was magnified one evening when I got bitten by a stray cat I was trying to feed. (No wonder I’m a dog person!) My parents caught the cat and locked it in our playhouse, where we were instructed to keep it quarantined for two weeks. In the meantime, I was told all about the fate in store for unfortunate humans who got rabies, and what would happen to me if the cat was found to be rabid. This was America in the 80s and back then the treatment was a series of twenty-one injections in the stomach with a long, painful needle. (You couldn’t devise a more terrifying prospect for a child than that!) But luckily for me, it was just a nasty, ungrateful cat rather than a rabid one, and I was spared the horror.

I’ve always wondered whether people who read the book or saw the film are that little bit more diligent about vaccinating their pets than those who don’t know the story. Rabies doesn’t exist here in the UK, so I also wonder whether "CUJO" has the same effect on British readers.

It’s generally considered a “lesser” King novel, though never by me. Because of my own childhood scare, I’ve always felt a personal connection with it. It’s not my favourite King book ("Pet Semetary" has that honour), but it’s definitely in my top five. I love "CUJO". And reading it again all these many years later hasn’t diminished my love for it and my enduring empathy for that poor Saint Bernard who had always tried to be a good dog.

. . . The words coming from THE MAN meant nothing. They were meaningless sounds, like the wind. What mattered was the smell coming from THE MAN. It was hot, rank, and pungent. It was the smell of fear. It was maddening and unbearable. He suddenly understood THE MAN had made him sick. He lunged forward, the growl in his chest mounting into a heavy roar of rage.

Thana Niveau has been nominated twice for the British Fantasy award – for her collection From Hell to Eternity and her story “Death Walks En Pointe”. Her work has appeared in a wide variety of places, ranging from Zombie Apocalypse: Endgame to Interzone, from Demons & Devilry to Steampunk Cthulhu.  She has been a Stephen King fan ever since she learned to read.

You can find her online at thananiveau.com or on Facebook, where she spends way too much time.
at 09:00

Email ThisBlogThis!Share to TwitterShare to FacebookShare to Pinterest
Labels: Cujo