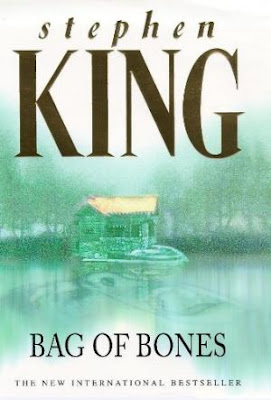 Grief. That's the emotion that got to me the most during this re-read.

The first time I read this book I had just turned thirty and even though I was already married, the horror of losing a spouse didn't get through to me like it did this time. Now, after just having celebrated my 30th wedding anniversary, the idea of losing my husband is unfathomable. Stephen King dove deep into those fathoms and dragged me along with him. I did not like what I saw or felt. That, right there, is the reason why Stephen is the KING.

I'm not going to go into the plot too much here, this is an old book and it's even had a made-for-TV-movie, so I can't say much that most people don't already know. This story is a combination of ghost story, revenge, and love story. It has genuinely scary moments and other moments so poignant that I found myself with tears in my eyes.

But what is most important about this tale, about all of King's works, really, are the characters. King creates characters that are so real you feel like you can reach out and touch them. They are so real, you take in their emotions as your own. And he does it by not shying away from the ugly moments we all experience inside our own heads.

The fact that widower Mike Noonan lusts after a young woman is painful for Mike to acknowledge and we, the Constant Readers, can feel how Mike is torn between that lust and guilt, and all the tangled feelings of betrayal and loss that go along with that. Even though he's widowed, he feels these emotions and we can  feel them too.  In our hearts, we know what Mike is feeling is true, because that's how WE would feel.

Not only does King draw great good characters, he draws great bad ones, as well.  His bad guys, not just Mr. Devore from this book, but ALL of them, have layers and a realness to them that brings them alive. They're not just men dressed in black, (Randall Flagg, I'm looking at you), they're complicated, (Trashcan Man), they have depth to them, and we (I?) LOVE to hate them. In this book, Mr. Devore is a rich, frail, elderly man in a wheelchair, yet he still comes at Mike with a menace that is horrible to witness. Our emotions are pulled every which way, how could we HATE an old man in a wheelchair? But there is no question that we DO hate him, and there again, the King has manipulated our emotions and has his Constant Readers, and all other readers, in the palms of his skilled, talented hands.

I loved this book. I love Stephen King. That doesn't mean that I've loved every book he's written, but I usually do love his characters and creations, (Wolf, Billy Bumblers), and they still live within my memory. For me, no other author has created so many memorable characters and place settings. The words Derry, Jerusalem's Lot and Pennywise- they all cause an instant picture to appear in my brain. I say let him plant a picture in your brain too: of Sarah Laughs, of the T.R. and Mr. Devoe, Mattie and Kyra. I'm pretty sure you'll thank me later.

I highly recommend this book to everyone. Just hold on tight, because your emotions are going to get knocked around a bit by the King, but hey, there's no one better qualified to do so. You'll be getting knocked around by one of the best authors living today.

Charlene Cochrane has loved horror since she saw her first horror movie at the age of 8. These days, however, her horror interests are mostly of the literary variety. She is on the reviewing team at Horror After Dark and also has her own blog at Char's Horror Corner.  She is also on Twitter as @Charrlygirl
at 09:00

Email ThisBlogThis!Share to TwitterShare to FacebookShare to Pinterest
Labels: Bag Of Bones