The Shining, reviewed by Anthony Cowin

The Bad Thing In Room 217: Stephen King’s The Shining 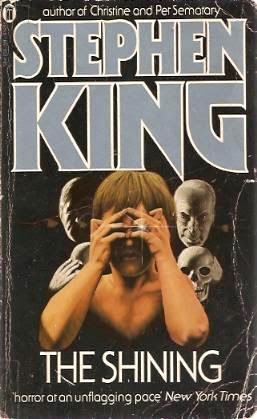 That two line exchange on page one of The Shining between Jack Torrance and Ullman the manager is King’s way of letting us in on a secret. This novel is going to be a battle between Torrance and his family. It also alerts us to the fact his son may be more than just a bright kid – he may be special. The manager of The Overlook Hotel already senses this and now we do too. It’s a masterful way to set the tone of what is to come and who we should be keeping an eye on. It’s also one of the reasons why I think The Shining was King’s breakout novel. He’d had success with his earlier work for sure, but this was his fist on the desk - world watch out book– ‘There’s a new King in town’.

I’m getting a little ahead of myself here so let me take you back.

My first encounter with The Shining was like meeting my wife’s twin before I found my true love with her sister. I set eyes upon Kubrick’s celebrated film on TV before falling for Stephen King’s novel. And while they’re not identical siblings they are both close enough to cause an old man like me some confusion from time to time.  I didn't come to the book until much later for two reasons; the first being I was working through the more straight out horror work of King after coming to him relatively late, and I was also a little intimidated by the ghosts in the Overlook Hotel. So when I finally plucked up the courage to read the thing I went straight out and bought a brand new (shiny) copy.  Most of my other King books to that point had been borrowed from my horror loving brother, passed down by friends or picked up in second hand book shops.

The Shining was my first spine breaker. And like a new love, or at least her twin, I spent every spare moment with King’s words until I was exhausted.

So why did this one novel from King’s Fordian conveyor belt of writing resonate with me more than his others? I guess it was the intelligence of the piece, the precise writing that coiled and tightened until I saw Jack Torrance lurking in every line between the pages and every blink of my own eyes.
Even though this was only King’s third published novel it read like a much later piece, the work of an established writer with a canon to rest under his Remington or Underwood. This was his third album masterpiece.

There’s a phenomenon in rock music where bands spend so long paying their dues that the first album is a rush of energy, ideas and influence. So Carrie was just that. A short explosion after an eternity floating in the cosmos of creativity. The second is called ‘the difficult album’, though the good bands fight through and take a step closer to greatness. ‘Salem’s Lot is a hell of a second. The really special bands hit a golden period with their third. Often it's never bettered even after pension stuffing careers producing countless long players. So, in my opinion at least, this is exactly what King did with The Shining. It's the real round the block, ready to break up the band, sex and drugs and rock and roll masterpiece. The shining is King’s A Hard Day’s Night or OK Computer, or London Calling.


“You can check out any time you like, but you can never leave.”
The Eagles, Hotel California

The novel is a different beast to the film for sure, and I think both stand up as great works in their own right. But there's something deeper in the psychosis of the novel that King brings to the table. It's the work where King abandoned any remains of new writer pasticheur, though influences still remain. He developed something truly his own with his third published novel. It’s a beautifully crafted story with an ever present threat of fracture creaking like ice between the lines.

The gliding movements between supernatural to psychological thriller could have been clumsy in the hands of a less assured writer. I often wonder if King felt as haunted while writing the thing as I did reading it that first time. Did he need to expel the whole novel as soon as he could before the rattling ghosts, (more empty vodka bottles than Jacob Marley chains), finally dragged him away?

The Shining is essentially a story of last chances. Most of them belonging to Jack Torrance. His drinking and boiling violence have been threatening to blow for years. Breaking Danny’s arm, being fired for a punching a student, and of course the car crash that in a lot of ways is the catalyst to the Torrance family winter in The Overlook. This series of self-destruction stole any sense of security. You don’t get tenure caretaking a hotel closed for the season.

Jack’s wife Wendy has certainly given him too many chances. Like the boiler that keeps creeping in the hotel basement their marriage is patched together too many times and ready to explode. Jack’s recent history is a choice of suffering. King sets up the first quarter of the novel asking his readers if we think Torrance will choose suffering again. The remainder of the book examines if he really did have a choice at all. Is Jack’s compulsion to violent outbursts inherent, part of his make up, either a genetic echo or a childhood learning?

King is more open about the psychosis of Jack’s paranormal experiences as caretaker than Kubrick made us believe in his film adaptation. But certainly his boy Danny does have a supernatural gift.

Ironically Jack’s enforced sobriety in an isolated hotel free of booze triggers the return of ‘The Bad Thing’ as Danny refers to his drunken outbursts. Did the incidents in his past stem from the alcoholism or in spite of it? Like putting out fire with petrol. Well as the boiler creeps and Jack stalks the corridors with a Roque mallet these questions fade away. He’s witnessed topiary animals conjured to life and drank with ghosts in the ballroom. Ghosts like echoes reverberating from the hotel walls; no matter how many times new owners change the wallpaper or carpets the dull he sounds of the spirits, or Martinis, return like a bad smell. A scandal is never forgotten at The Overlook.

Many people have observed that the hotel is the ghost in this tale, but so is Jack Torrance. The stinging thoughts that haunt his mind are like the wasps on the roof above a rat sculling attic. The floors reflecting his own flaws. The churning darkness of the basement with its creeping threat like his own deep psyche. The place is shut off, isolated from the people who make it alive. It’s cold and soaked in dark history. The hotel, like Jack, is full of lurking dangers waiting to uncoil like a fire hose snake.

I won’t cycle down any more corridors as far as plot is concerned in case people haven’t yet read it, or forgotten a lot before a re-read. Speaking of rereading The Shining I was shocked at how much of the film crept into my idea of the novel. It’s as though Kubrick himself left open the doors of room 217, or 237 depending on which ghost your imagination conjures- book or film. The novel and film have certainly morphed into one beast in certain corridors of my mind. One corner is Kubrick, the next is King.

So the Shining is also a novel about turning points too. A story of the need to break one’s own self to reach the exit door. How we all tend our own creeping boilers at times in our lives, possibly to see if we’ll cope or if we’ll blow. It’s also about addiction, not simply to substance abuse, but to work, to pressure, to the search for something different in our existence. How we isolate ourselves to find the thing we crave, or how we keep hold of those things once we have them.

Yet I suppose The Shining comes down to one thing in the end and that’s fear. King writes an old AA saying at the front of his loose sequel Dr Sleep – ‘FEAR stands for fuck everything and run’. Fear is the driving force that pushes us all to make both good and bad decisions. When the ghost serves one too many drinks to the addict is that us playing chicken with our lives, taking a gamble when we know the risk is too great? When the dead woman in the bathtub tries to choke the life from the child’s throat, isn’t that our past coming back to crush our present and our future? Or when it all feels like we’re ready to burst. Then maybe it’s time for us to blow- up or out it doesn’t really matter. What King does with The Shining is instil this sense of fear (or FEAR) more than any of his other out-and-out horror novels. Because it could all be real. Forget the ghosts, forget the supernatural premonitions- The Shining is about losing everything you’ve built- career, reputation and family. To swing the wrecking ball that can bring it all down to rubble.

Stephen King has stated there are parts he’s embarrassed about now. Pieces he thinks are overwritten, maybe trying to be a little too clever. Maybe this is true but it’s difficult to find any real criticism. Rereading The Shining made me realise what a force King is as a storyteller. He may write horror more than any other genre but it doesn’t really matter, because he’s a writer who understands his readers. There are some of his novels I’ve never finished and some I’ve finished but have left me underwhelmed. But for the most part Stephen King has given the world a unique and incredibly strong body of work. I just think The Shining is his best. His great third album.

So if you haven’t already stayed at The Overlook Hotel then book a room real soon. I hear 217 is available, entertainment is free and they have a killer deal during winter.

Anthony Cowin’s stories have appeared in numerous magazines and anthologies. His recent chapbook The Brittle Birds (Perpetual Motion Machine Publishing) was met with widespread praise and he's busy working on a novella and novel for 2015. He writes reviews for leading genre outlets such as The Horrifically Horrifying Horror Blog, Shadowlocked and Starburst Magazine. While not writing he spends time raising his two young daughters, their pesky cat and playing piano.
at 09:00

Email ThisBlogThis!Share to TwitterShare to FacebookShare to Pinterest
Labels: The Shining