King For A Year - in summary

Well that's it, the King For A Year project has now drawn to a close. 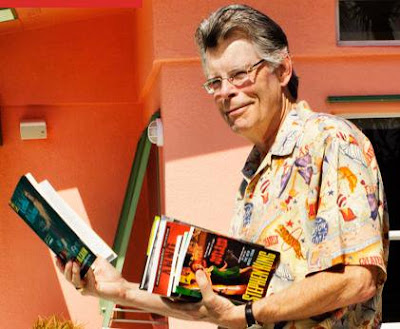 When we (me, Alison Littlewood, Anthony Cowin, Ross Warren and Andrew Murray) first talked about doing this in April 2014, the original idea was for us to pick one novel each, write about it and link all the blog posts.  It was Ross who suggested creating a blog (and Willie Meikle who named it) and once we mentioned it on social media, I was surprised at how many people were eager to get involved - at the time, it seemed an unlikely (and, to be honest, mammoth) undertaking but here were are, in January 2016 and it's done.  What started out as a one-book-a-month review blog quickly became one-book-a-week and, as the year wound down, it became one-book-a-day.

Indeed, over the course of a year and 56 reviewers, we've looked at over 64 books and received over 29,000 views in return.  Which isn't too bad at all really, is it?

For my part, as curator, I've enjoyed reading the reviews (in fact, I've put books on my TBR list based on some of them) and I'm thoroughly grateful to all of those people who 'put pen to paper' and let us know why they love a particular book and what it means to them.

Thanks to all of them (and their good humour with my 'early submissions are always welcome' reminder emails), thanks to all of the visitors who've come along and read (and I hope that, if you're a Constant Reader, you've had as much fun with this blog as I have) but most of all, thanks to Stephen King for making it all possible.

Since this will forever be the last post, I've listed all of the books reviewed and linked back directly to them for ease.