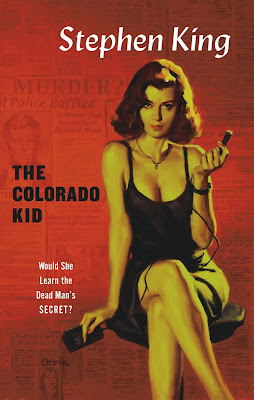 In the words of many a great politician “I have a confession to make” - I am not a fan of Stephen King’s writing.  I’ll never deny his place, his contribution to the genre or his undeniable talent but he just lives in that world where, like the Beatles, I just don’t get it. It might be his over American style of writing, or it might be the fact that, for me, he seems to take an age to actually get to the point.  Which makes why I actually really like "The Colorado Kid" seem a bit odd. It could be argued that this is his most American novel,  as part of the fabulous Hard Case Crime series of books - a series of snappy, classic inspired crime stories full of gun-toting fedora wearing heroes who like to drink bourbon almost as much as they like to cop off with broads and damsels - you would think that I would really not be into it.  However I think the reason for this is thanks to the word limit constraints of the series which really hones his rather wordy style into a snappy and punchy crime story.

"The Colorado Kid",  is set on an island of the coast of Maine (where else could it be set?) and the discovery of a unidentified corpse of man which sets our team of investigators on a journey of discovery where every new clue they find baffles them more and more.  The story itself is almost as much about the mystery of telling a mystery story as it is about the mystery in the story itself.

The book came as a bit of a shock to King’s fans, it was released into the world without any prior knowledge, no one knew it was coming out, let alone the fact the King would be turning his hand to a pure crime story.  At first people were intrigued and excited but that quickly turned to sour grapes.  This wasn’t your typical King book, people were outraged, but Jimmy was happy, Jimmy really liked this book, Jimmy thought this is how King should write.

When you strip King down from all his scene setting, all his wordy dialogue and all his descriptions of every single thing about the characters and their actions, what you are left with is strong solid writing.  Writing that conveys a story that, despite its somewhat stripped down nature, still manages to intrigue and looks at the art of telling stories without all the superfluous waffle King seems to be so in love with.

For me the characters felt more real.  Told in a third person narrative there was no scope for purple prose, their dialogue and retelling of the mystery felt more realistic, people talked like they would and no-one was a master story teller, which has always been a bug bear of mine in stories.  And yet he still manages to throw in clues to the Dark tower series - he just can’t help himself.

What also helped was the small cast of characters - essentially it’s just the three, well four if you included the mysterious Colarado Kid himself.  The interplay between the two old reporters and Stephanie, who is on a summer internship on the island working for the local newspaper that the two old reporters worked for, is a joy to read.  King impressively brings out a great sense of nostalgia and mystery as they retell their story.

King has never shied away from a controversial ending - "From a  Buick 8" anyone?  - and the ending to "The Colorado Kid" certainly doesn’t shy away from it either.  It really upset a lot of people, but me, I loved it.  Remember this story was also about the mystery of a mystery and personally I thought it was perfect ending.

While I love this book, it sadly hasn’t converted me to being a fan of King’s writing, but for a couple of hundred pages I can wallow in what is a great crime story.  Hopefully King will return to this style of writing in the future but for now, this horror fan will remain a committed republican.

Jim McLeod has been a fan of horror ever since that fateful Friday night when he snuck down the stairs to watch Hammer's "Dracula".  He set up Ginger Nuts of Horror six years ago, and in that time it has become the largest independent horror website in Europe.  One of the many highlights of his time on the website was when he interviewed Joe Hill in front of a packed out audience at The Pleasance in Edinburgh for the release of Joe's novel NOS4R2.

Ginger Nuts Of Horror also has a Facebook page and Jim can be found on Twitter at @jimbomcleod
at 09:00

Email ThisBlogThis!Share to TwitterShare to FacebookShare to Pinterest
Labels: The Colorado Kid