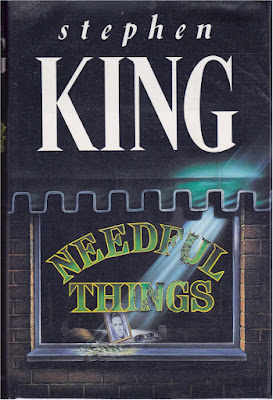 We bump up against each other every now and then, but mostly things go along all right. Or always have, until now. But I have to tell you a real secret, my friend; it’s mostly why I called you over once I saw you were back in town. I think trouble – real trouble – is on its way. I smell it, just over the horizon, like an out-of-season storm full of lightning.

I read "Needful Things" when it was first published back in the early nineties. I’ve read most of King’s work and, if I’ve read a particular title of his, then chances are I’ve read it at least a second time. Not so with this title. Or, not until I jumped in to take part in King For A Year! Most of King’s books had been snapped up at this point, certainly the best ones, and so there I was, about to reread a book I didn’t think much of first time around. This year I’ve read it twice and also re-watched the film adaptation which I’d only seen on late night telly on my return from the pub.

What’s the book about then? The basic premise is simple enough; a shop opens in Castle Rock (a town familiar to King fans) and the town’s inhabitants are drawn towards it, each buying items in return for a small amount of cash and the playing of a prank on another of the townsfolk. The early pranks appear innocuous but they play on already present tensions within the community and soon escalate as more residents buy their needful thing from the shop, the tricks played throughout the town growing more violent in turn. It’s this thick web of tricks and the insidious setting of a town against itself that takes "Needful Things" beyond its simple premise and into the world of the sprawling epic; the copy I bought in order to read the novel anew weighs in at a hefty nine hundred and thirty-three pages!

King didn’t intend for the novel to be considered as horror. He says on his website ‘I guess I was one of the few people in the United States who thought the eighties were really funny. It was a decade in which people decided, for awhile, at least, that greed was good and that hypocrisy was simply another tool for getting along … It occurred to me that in the eighties, everything had come with a price tag, that the decade quite literally was the sale of the century …’ and so he ‘… decided to turn the eighties into a small-town curio shop called Needful Things and see what happened.’ King also claims to have been in a sensitive place at the time of writing the novel. He’d quit drink and drugs by this time and wrote the novel straight and sober. He was proud of the novel but it bombed with critics and doesn’t seem to rate high on the list of best-loved King titles with many of his fans.

So what’s wrong with this novel? If you’re familiar with King’s output then surely a novel set in Castle Rock, which refers both directly, and more subtly, to events and characters which take place in other Castle Rock stories should be a delight to read. Perhaps, for some, it is just that – a chance to connect more of the dots created by King’s imagination in order to build a fuller picture of the fictional Maine. For me, and I suspect for many others, "Needful Things" falls down in what appears to be a desperate need to rehash substantial amounts of King’s earlier work. The slew of geographical and chronological connections with other novels, the reworking of character archetypes – with Leland Gaunt and the shop leading the pack in a variation of Barlow, Straker and the antiques shop from "Salem’s Lot" - and the blatant use of plot devices, from several earlier novels wears thin in "Needful Things".

It has its better moments, quiet and considered turns of phrase which make up for the chaotic tone of the rest of the novel. When Brian Rusk, the shop’s first customer, begins to understand the nature of what he has agreed to, the reader glimpses the boy’s dismay - It was as if one corner of his mostly open and goodhearted nature had been walled off and then lit with a special black light that both distorted and enhanced what was hidden there.

But the smattering of evocative moments like this is not enough to save the novel from its many flaws; at least not for me. The one saving grace of "Needful Things", reading it in an era of internet arguments and petty-mindedness, is to think of it less in King’s terms of eighties extravagance and greed, and more in terms of the unpleasant tendency of the human species to generate hatred and spiteful behaviour towards one another with little provocation.

Sharon Ring is a freelance editor who specialises in horror and fantasy writing.  Her website is currently undergoing a revamp but she can be found on Twitter (@SharonLRing) or via email at sharonlring@gmail.com.
at 09:00