The Eyes Of The Dragon, reviewed by Jay Faulkner 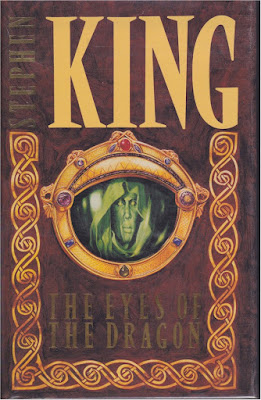 Stephen King’s novel, "The Eyes of the Dragon", is a tale of heroic adventure, set in the kingdom of Delain. It involves a king who is poisoned, a young and beautiful queen, a prince locked in a high tower while his younger and weak brother assumes the throne manipulated into doing so by an evil magician who harbours terrible secrets and malevolent plans …basically everything you’d except from the master of horror’s foray into the realm of pure fantasy.

The thing about the novel is that it has become a Marmite book – you either love it or hate it. I’ve spoken to King fans who hated it even though they’ve never even read it, purely due to the fact that they claim it is fantasy rather than horror.  The thing is, though, that I think that King always writes fantasy, just sometimes it is darker, more real, and horrific than others.

That said I’ve always felt that ‘The Eyes of the Dragon’ is different from all other King books for one reason: I don’t think it is even really aimed at adults at all, I think it's aimed at the same sort of age group who read Harry Potter, or The Hobbit. It reads as a bedtime story for just as you are wrapping your head under the blankets on a dark and stormy night, mirroring the tone – and the weather - of the book itself. Perhaps that is another reason the book divides the fans; it’s King’s first young adult or children’s book without being purely aimed just for children. Confused? Don’t be. All you need to know is that, with ‘The Eyes of the Dragon’, King weaves a truly engaging spell and gives us his twist on a ‘fairy tale’ that would do the Brothers Grimm or even Disney proud.

The story is told throughout from the viewpoint of an unseen narrator, or storyteller, and King adopts this ‘storyteller’ voice with ease, adding charm and colour to the book. The experience of reading it is similar in tone in some ways to "Stardust" or "The Princess Bride", and has echoes of Morgenstern's voice but is very clearly King’s own.

King tells a vibrant story filled with invention and detail. His characters are a diverse set of good and decent people from peasants to royalty, from servants to friends, and allies to enemies, and King manages to ensure they are each their own unique personality. King Roland doesn’t mean to love his son Peter more than his son Thomas, but he cannot help himself. Thomas is always overshadowed by his ‘perfect’ brother, and desperately wants his father’s love. The king’s magician, Flagg (who has shown up in many King novels, sometimes under other names, but always just as evil), has been waiting for hundreds of years to cause mayhem on the kingdom. He is the king’s advisor, and all people fear him—and rightly so. And these are just three of the many and varied characters; there are so many others and King ensures that he devotes the same attention to them all, no matter how many pages they are in the book for. It is this attention for detail that he is known for and he keeps it going here.

The premise of the book itself, as would be expected in a ‘fairy tale’, is a relatively simple one but in Stephen King’s hand it takes on a life of its own and while you hope that the ‘happy ever after’ you'd expect from a ‘fairy tale’ is coming, because it is King you are never quite sure if you are going to get your wish.

The pacing is brisk and things look bleaker right up to the last few pages, the last few words. Flagg, the evil magician, is finally so close to getting his way with the Kingdom of Delain.  Peter, the rightful ruler, is locked up in a high tower, close to death, with only a napkin between him and a certain death. It is at this point the reader suddenly remembers, breathless, that you are not just reading any old book about a battle between good and evil, but that you are reading a book by the master of horror, Stephen King.

So, this close to the end of the tale and, as I said, breathless, we’d be certain that good would triumph over evil somehow, wouldn’t we? Sure, normally, but this is Stephen Frikkin’ King! Like I said, the Master of Horror.

I won’t tell you how ‘The Eyes of the Dragon’ ends, but I will tell you two other things:

1/ you should read it for yourself so that you can find out and 2/ it’s worth doing so because, as a lifelong Stephen King fan, it is that damn good. Honestly.


Jay Faulkner resides in Northern Ireland with his wife, Carole, and their two boys, Mackenzie and Nathaniel. He says that while he is a writer, martial artist, sketcher, and dreamer he’s mostly just a husband and father.  He sometimes even finds time to sleep.

His work has been published widely, both online and in print, and was short-listed in the 2010 Penguin Ireland Short Story Competition. He is currently working on his first novel.

He can be found online at www.jayfaulkner.com
at 09:00

Email ThisBlogThis!Share to TwitterShare to FacebookShare to Pinterest
Labels: The Eyes Of The Dragon