There will be spoilers.  You have been warned. 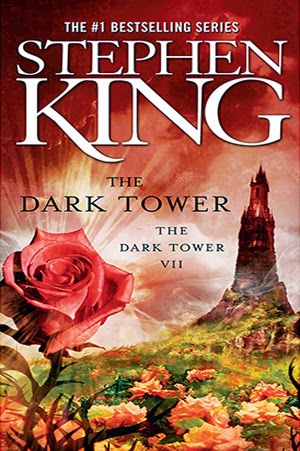 It can be said that King’s Dark Tower series is the burning heart of his story-verse, connected to the worlds of his other books by places, random items and characters that walk between the tales.  These connections have always given the series an extra appeal, providing a wonderful feeling of familiarity in finding the stories and characters you’ve loved mentioned in new adventures.  In The Dark Tower, there is the satisfaction of old fictional acquaintances such as Father Callahan from ‘Salem’s Lot; Patrick Danville from Insomnia, Ted Brautigan from Hearts of Atlantis; and, of course, Randall Flagg from both Eyes of the Dragon and The Stand – all of whom have their own not insignificant role to play in this last of the series.

The story kicks off in 1999 New York, with Father Callahan, whose part in attacking the Dixie Pig restaurant and its monstrous denizens gets him a triumphant last stand against a pack of vampires, and paves the way for core characters Jake and Oy to move on to find the still missing Susannah.  Susannah, as readers with good memories will recall, was last seen in Fedic, possessed by the demon  Mia, and about to give birth to a child who can claim both Susannah and Mia as mothers, and Roland and the fabled Crimson King as fathers.  Meanwhile Roland and Eddie are finishing up their latest adventure in 1977 Maine, having met with the fictional version of Stephen King and laid the groundwork to protect the Tower-connected hub-of-the-universe rose in New York.  Not only that, but somewhere back in Roland’s world there are breakers damaging the beam that holds the Tower in place, and portents of King’s impending death via hit and run; and if one falls, then the whole multiverse is doomed to ultimate destruction. So no pressure. Oh, and if they can manage to save the multiverse, they’ve still got to find their way to each other across different worlds and timelines, and at some point make the journey to the legendary Tower where the Crimson King is rumoured to be waiting for them.

As it turns out, the reunion is the easy part, thanks to some handily placed portal-doors which have provided another of the series’ endearing plot points – that of travel between alternate worlds and time lines. I freely admit to being something of a sucker for a good portal fantasy and The Dark Tower is an epic example of the oeuvre, but it’s not just the portrayal of other worlds that hits buttons, there’s some wonderful hints of horror in the things that wait in the Todash spaces between worlds - slithering creatures who escape where the barriers between worlds are weak and wait in the shadows for the unwary to come into hunting range.  Used to great effect in other King stories, such as The Mist, here the monsters from Todash space serve to break the melancholy mood created from recent character losses as our rapidly diminishing group of heroes are chased out of Fedic and onwards.

While the monsters and the narrow escapes can be seen as one of the things King does best, not so successful is the near endless stream of portents and visions and magic plot tokens set up by the fictional version of King to aid his characters.  Used sparingly, these have worked well in previous stories, but here there’s just too many, as each death is preceded by suitably dire warnings that something terrible is going to happen and, as such, both takes away the impact of the events and feels like unnecessary padding.   And it’s the padding which makes the Dark Tower something of a mixed bag.

On the one hand, King is excellent at eking every last bit of emotion out of the reader - from the joyful reunions and triumphant victories, to the tragic deaths and bittersweet endings.  On the other hand… dear lord, the waffle.  As a long time King fan, and especially, a long time Dark Tower fan, I’ve got a high tolerance for the lengthiness of the standard King tome, but there were sections such as the just-a-tad-too long woolgathering of Randall Flagg, and the minutely described how-to-use-everything-from-a-deer bits that stretched that tolerance to breaking point.  Reread after reread, it’s those and similar tangents that need skipping to stay on track with the story, but despite the flaws, it is a glorious protean story that slides from western to pulp crime to horror to post apocalyptic science fiction to epic portal fantasy without pausing for breath.

And then there is the ending.  The ending has polarised a lot of people.  Some like it, some hate it. King even warns you about the perils of reading it before you get to it, advising his constant reader to leave the book at the happy alternate world version of reunions that is found in the epilogue.  Except without that final and more twisty ending, there’d be something unfinished about the story.  That last bit, that return and redo with the promise of slightly different events… that adds something nicely satisfying to Roland’s story and leaves the reader with the tantalising possibilities of the stories to come, and that, I think, is King’s final triumph with The Dark Tower.

When not doing any of that, she’s a minion of all trades for the family business and can usually be found wrangling spreadsheets and walking around rented houses talking to herself.
Brave souls can find her at: www.jennybarber.co.uk  or on twitter at @jenqoe

Email ThisBlogThis!Share to TwitterShare to FacebookShare to Pinterest
Labels: The Dark Tower