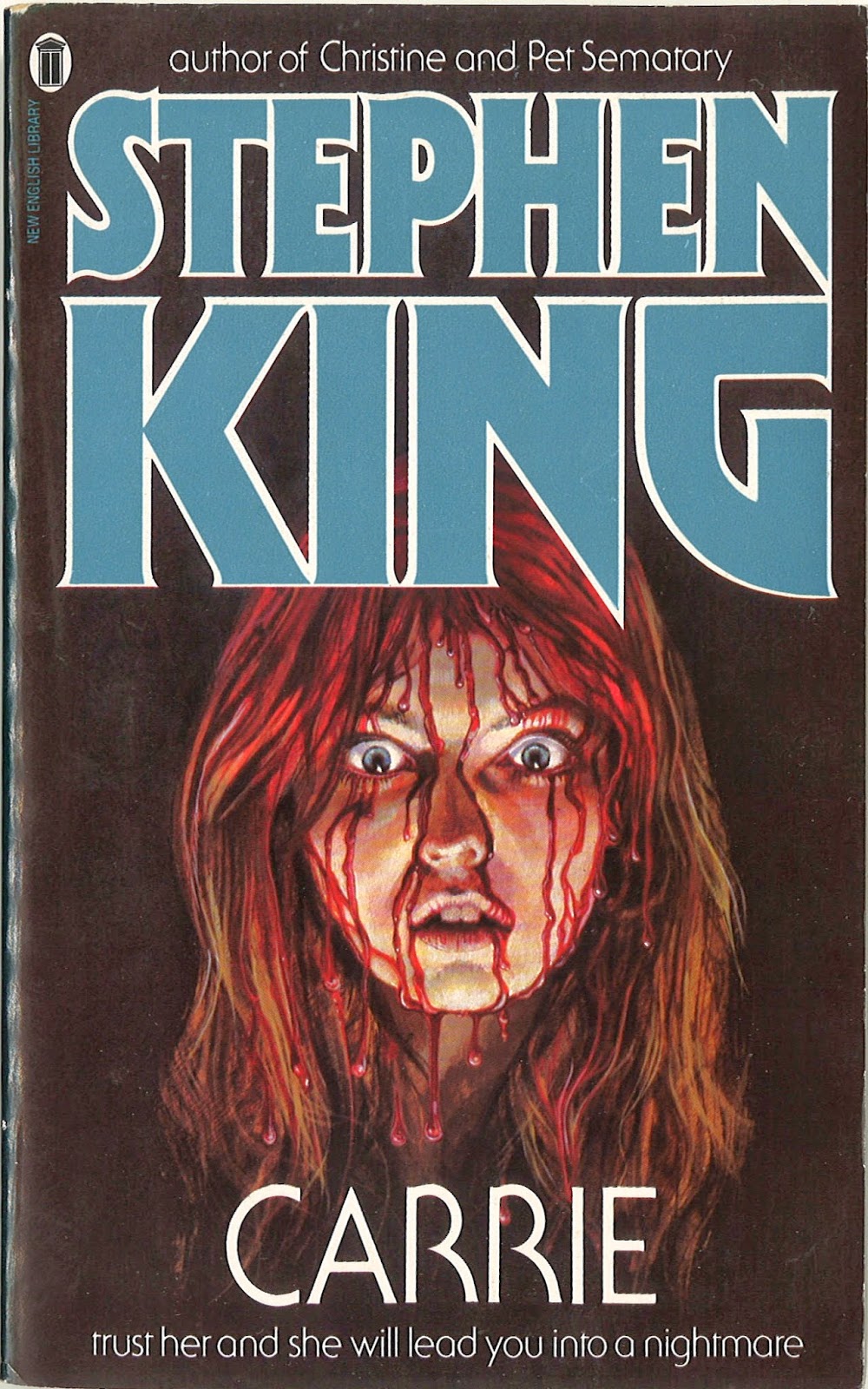 I’m not sure how old I was when I first read "Carrie", but I know it was one of the earlier King books I did read, so let’s say a young teen—maybe 14, surely no older than 15. I was curious to see how I would respond to the book this time around because the fact of the matter is, I didn’t much like "Carrie" back in the day. I mean, I thought it was okay, but I much preferred the vampires of "Salem’s Lot", the haunted corridors of "The Shining", and most of all, the apocalyptic sprawl of "The Stand", which I vividly remember reading in literally a single weekend, most of it all on a single day, glued to the book for what must have been eight or ten hours. Oh, to have those power of concentration again!

But "Carrie" - I don’t know. And being a teenage girl myself and all, I felt like I ought to be able to catch hold of something in the book, I ought to relate to it more, but it just left me cold. For whatever reason, when it came to teenage characters when I was a teenager myself, I preferred "Christine" (possibly because King was just better at writing boys than girls).

So, thanks to this project, I sat down to read "Carrie" for a second time, decades after my first and only read.

I am guessing that nearly everyone reading this blog knows a few basic things about "Carrie", but just in case: it’s the story of a bullied telekinetic teenage girl. Four things about this book particularly struck me that I want to talk about.

• This is a book about female agency, rage, and power; about both the fear and the ecstasy of seizing that power and agency; and about what happens when that power and rage are suppressed. For a writer who’s received some criticism over the years for his treatment of female characters (despite several valiant efforts at writing from a female POV), King taps into something primal and true here. I was particularly struck by the early scenes in which Carrie begins to realize her power, to move things with her mind and to defy her mother. I felt thrilled for her—I wanted the book to have a different ending even as I knew what was going to happen as I moved inexorably toward the climax.

• I’m struck by the sureness of King’s style and voice, already well-developed and easily recognizable here even though he must have only been about 25 at the time he wrote it, if not younger. That plus the way the narrative just moves—he is already an accomplished storyteller.

• King does a few interesting things simultaneously: he often describes Carrie, sometimes from a character’s POV but other times from what appears to be an objective POV, in ways that create disgust toward her in the reader—early in the book, she looks around “bovinely”; a character “noticed with distaste that a large bubble of green mucus had formed at one nostril.” She comes across in some of these scenes as physically repulsive, and so as a reader, we find ourselves recoiling from her in the same way her classmates and others who encounter her do. We find ourselves, just a little bit, in the shoes of her tormentors.

Yet King alternates these descriptions with other scenes that draw Carrie with a remarkable amount of compassion. I was struck by this again and again—the degree of empathy that King has, and conveys to the reader, for this girl who is either bullied by or invisible to just about everyone.

Also, bless him for not making her secretly beautiful, someone who thinks she’s hideously ugly and really isn’t. Okay, sure - when Tommy comes to pick her up for the prom, he tells her she looks beautiful, and we’re told she is, too. But I don’t think he’s doing here what authors normally do when they reveal that their supposed ugly ducklings are secretly beautiful. I don’t get the patronizing vibe I do from novels where we are supposed to believe a woman is ugly because she is “too thin” or “her lips are too full” or she has some other characteristic that the author is somehow trying to spin to be undesirable when everyone knows it’s a contemporary standard of beauty. For much of the book, I feel like Carrie really is physically unattractive to an offputting degree - even disgusting - and at that moment in the book, in her prom dress, she is beautiful because she is stepping into her power, defying her mother, becoming the Carrie White that she might be were not that beaten, downtrodden, bullied girl. Her telekinesis aside, Carrie displays a real inner strength. With her mother, she’s done the thing that every victim of an abuser in an intimate relationship must do: said I love you but I have to go and be the person that I am.

Of course, it all goes horribly wrong, because this is a horror novel (well, sort of), but there is a quiet dignity in her defiance, and I’m cheering Carrie on so hard during those scenes even though I know it’ll all end in tears.

• The shower scene at the beginning: you know the one I mean. Carrie in the shower, terrified, pathetic, naked, blood pulsing down her legs, pelted with tampons and pads by screaming teenage girls.

That scene didn’t work for me when I was a teenage girl myself, and it still doesn’t. It just doesn’t ring true to me. Partly, this time I was struck by practical concerns (1. How many sanitary products do these girls carry around with them at any given time anyway??? It sounds as though they’re all lugging round boxes and boxes!! Okay, so there’s a broken dispenser, but how many fit in one of those machines anyway? “They flew like snow.” Really? 2. Aside from the dispenser, why do they all have so many of these handy, anyway? Are they all having their period right now? Which leads me to 3. And if they are all having their periods and bleeding heavily - which is the only explanation for why a small group of girls would have what appears to be dozens of sanitary products on their person - why would they throw them all at Carrie? They’re going to need those, you know!)

Okay, but beyond my admittedly weird obsession with where all these tampons and sanitary napkins came from, this scene still doesn’t work for me, and I can’t quite put my finger on why. The girls standing around, chanting “PER-iod, PER-iod” and “plug it up, plug it up” - you know what? Maybe it reads like the way boys might bully other boys if boys had periods. I’m not saying girls don’t bully overtly, but this scene has never worked for me and still doesn’t. Which is a shame, because it’s a pivotal scene, one that spawns the events of the rest of the novel - fortunately, in spite of its shortcomings, it still has a raw power about it that carried me past my objections and allowed me to settle into reading about its consequences anyway.

All in all though, I think "Carrie" is a remarkable accomplishment. I really think it is one of King’s better novels. If you’ve never read King, it’s not the place to start (I’d recommend something like "The Shining" or "Misery"), but it is a strong debut. I love its compactness, too; my teenage love for "The Stand" notwithstanding, I generally prefer shorter books to longer ones, especially when it comes to horror. That said, I think this book in particular would suffer if it were any longer. It’s so claustrophobic in there with Mrs. White’s fanaticism and Carrie’s despair. It’s not a world you could stay in for long.

There’s also a commentary in here about community, and how community still fails people. “Chamberlain has gone bad for us,” says one character near the end, and you can’t help thinking as you read those words that Chamberlain was always bad for Carrie, and why didn’t anyone understand, why didn’t anyone notice? But there are Carries all around us, and we rarely do notice them, and that’s just one of life’s small tragedies - only when you are Carrie, it is an all-encompassing tragedy. That invisibility is your whole world.

Above all, I have to commend a very young Stephen King for his courage and insight at tackling the inner lives and power of teenage girls; even if he doesn’t always get it right, he taps into something almost mythic, and he always treats them as people, as subjects, not objects.

I’m not sure I’d call it a horror novel, but "Carrie" is a thoughtful little book, and that it launched such a glowing career seems well-deserved.

Lynda E. Rucker has sold more than two dozen short stories to such places as The Mammoth Book of Best New Horror, The Year’s Best Dark Fantasy and Horror, The Best Horror of the Year, Black Static, F&SF, Shadows and Tall Trees, and Nightmare Magazine. She is a regular columnist for Black Static, and her first collection, The Moon Will Look Strange, was released in 2013 from Karōshi Books.  She can be contacted through her website and is also on Twitter @lyndaerucker
at 09:00

Email ThisBlogThis!Share to TwitterShare to FacebookShare to Pinterest
Labels: Carrie