I knew I shouldn't have volunteered for this one. 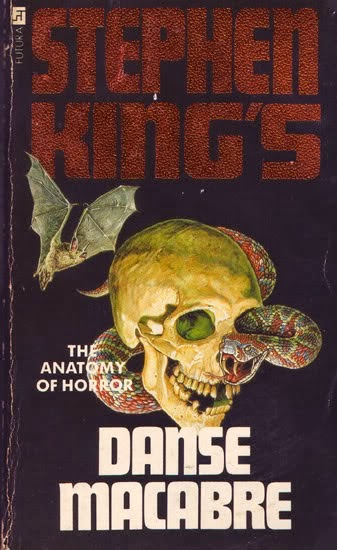 “Danse Macabre”, of all of Stephen King's impressive oeuvre, is the most difficult to critique. Had I picked one of his novels, I could have expounded at length on its pacing, characterisation and plot devices. Had I chosen one of his more conventional non-fiction works, such as “On Writing” or “Faithful”, I could have discussed its accuracy and utility.

But, no: I decided to look at King's novel-length essay on the horror genre in popular media from 1950 to 1980--a 450 page opinion piece that defies my usual reviewing techniques.

I'm lucky, then, that “Danse Macabre” is a blinder of a book. Much like H.P. Lovecraft's essay, “Supernatural Horror in Literature” (1927), I consider it required reading for any dedicated fan of the genre.

As a visitor to the King for a Year blog, you are doubtless a fan of the writer. His novels have regularly broken new ground in the field, his short stories are some of the finest set to paper, not just in horror, but in literature as a whole. His work has irrevocably changed the face of modern horror fiction (whether or not that's a good thing is up for debate, and a discussion for another day).

All of that I will cheerfully agree to, but none of them is the reason I have a deep and abiding (albeit somewhat rugged and manly) love for Stephen King. For that you would have to look at the forewords he has written for his various reissues (“The Green Mile” springs to mind, as do the expanded versions of “The Stand” and “The Dark Tower: The Gunslinger”) and his collections, not to mention his interviews and his introductions to other writers' books.

Here is a man who could live off his reputation and his back catalogue for the rest of his days. He need never put pen to paper again, and yet--and yet--to hear him speak about this genre that we all love (otherwise, why would you be here?) with such candidness and such unfettered joy, well, it's enough to warm the cockles of even the most jaded horror fan's heart.

And that's what “Danse Macabre” is, at it's core--a love-letter to the world of horror.

Breaking it down, chapter-by-chapter, would be an exercise in futility. Suffice it to say that King starts off by defining horror in general terms, before giving us a brief history lesson on the cornerstones of the genre (“Dracula”, “Frankenstein”, and “The Strange Case of Dr Jekyll and Mr Hyde”). There are a few autobiographical passages thrown in, but they tend to be used for illustration rather than vanity. For the most part, they are quite charming (although if you've read “On Writing”, there isn't much here that you haven't already come across).

The meat of the book is King's overview of horror across the four main media--radio, television, film and books--and this is where “Danse Macabre” comes into its own.

At times it feels like having a chat with an old friend, perhaps sat in high-backed leather armchairs, passing a decanter of brandy back and forth. King's personality and his irrepressible passion for the genre shine out from every page as he argues the case for “The Outer Limits” being a better show than “The Twilight Zone”, or waxes lyrical on the auditory sleight of hand that made “Lights Out” such a phenomenon of old time radio. Hell, he even attempts the impossible by condensing Harlan Ellison's outstanding contributions to the field down to thirty or so pages--quite the feat in itself.

I'm not going to lie to you, it's a daunting book to read in one sitting. There is so much information to take in and so many examples illustrating each of King's points, but that is part of the joy of it.

I was 14 when I first read the book, and something of a neophyte as far as my knowledge of horror history was concerned. I'd read some of the big hitters (King included), but I was by no means as well-versed in the field as I am now. Much of that growth came courtesy of “Danse Macabre”.

For each medium, King reels off ream after ream of pertinent examples and, in the twenty-odd years since I first read it, I have barely scratched the surface. It is thanks to this book that I sampled my first taste of Ray Bradbury and Harlan Ellison, Dario Argento and Tobe Hooper, not to mention the anachronistic joys of horror radio.

That was just in the main body of the book. In the appendices, he lists over a hundred films and books from the period that he feels epitomise the genre, enough to keep any horror fan busy for a while.

King and I have a difference of opinion on certain matters, most notably in the ten books that he choose to demonstrate the best of horror fiction over the period. Personally, I'd have picked Richard Matheson's “Hell House” over “The Incredible Shrinking Man”, James Herbert's “The Survivor” over “The Fog” and Ray Bradbury's “The Illustrated Man” over “Something Wicked This Way Comes”. But, hey, it's King's book and King's choice. When I become a best-selling horror author, I can make my own picks, right?

“Danse Macabre” is a product of its time. Many of the points that King makes about horror and its effects are now common parlance amongst writers, but that does not detract from the book itself. It's a fun, informal journey through the dark lands, and one that has left this reader richer for the experience.

One final thought: I read “Doctor Sleep” last year, and thoroughly enjoyed it. I couldn't help thinking that, of all his works, the one book I really wanted to see a sequel to was not “The Shining”, but this particular tome.

He lives with his wife and their two beautiful children, and one day hopes to be able to scare people for a living.  For more information, check out his website here.
at 09:00