On Writing, reviewed by Kit Power 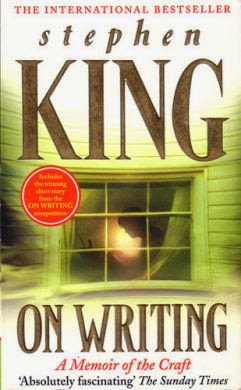 Here's the thing: I have a blogging gig over at the frankly rather wonderful Gingernuts of Horror website. A big part of how I landed that gig was because of a series called 'The Book That Made Me' – the premise of which is to write a short (or in my case, not so short) essay about the book that made you become a writer.

I chose Stephen King's ‘IT’, which I read when I was eleven, and Jim, the site proprietor, liked it enough that I got to start off a new series called 'The Film That Made Me', and from there things progressed to where I'm now writing a monthly column called 'My Life In Horror' about early horror influences.

Here's the thing though – while I didn't exactly lie to Jim in that first column, I didn't exactly tell the whole truth, either. Yes, I read ‘IT’ when I was eleven, yes, I read it every year for eight or nine years afterwards, yes, I still re-read it every three or four years, and yes, it's unquestionably still my favourite Stephen King book, big dumb ending and all.

In that sense, it is absolutely the book that made me. But there's another book, another Stephen King book in point of fact, without which I in all likelihood would never have penned that article, this one, or any of the short stories, novellas or the novel I've written in the last three years.

That book is ‘On Writing’. And I can say, with no exaggeration or hyperbole, that it changed my life.

The book itself is a slender volume. Re-reading it for this article, I was struck again by that – doubly so when you consider the first third of the book is actually a memoir of sorts (labelled with characteristic King humility as 'C.V.')  and the final portion is taken up with the story of the Minivan collision that almost killed him in the summer of 1999. The section of the book actually labelled 'On Writing' is only 40% of the total page count. That's a little deceptive – another 10% is taken up with 'What Writing Is' and a section called 'Toolbox' which is as you might expect about the nuts and bolts and mechanics of the craft (and deceptive for another reason which I'll get back to). Still, for a man with a well-earned reputation for verbosity, it's a lethally quick read.

That's utterly deliberate. In the 'Second Foreword', King opens with the following sentence:
“This is a short book because most books about writing are filled with bullshit.” There's a directness about this statement that resonated very strongly with me. I am inherently deeply suspicious of advice about creative pursuits in general and writing in particular. Maybe it's just prejudice, but I think the best writing (hell, best creativity in general) comes from a place of instinct filtered through intellect, not the other way around. 'Write from the heart, edit from the head', in other words. It was incredibly thrilling for me to discover that this view was shared by the author of some of my favourite fiction, the writer who I think I would still have to call the single biggest creative influence on me.

This philosophy runs throughout this, the so-called 'meat' of the book. We learn that King rarely plots, and is even more rarely satisfied when he does (a statement that will come as no shock to some of his critics) – The Dead Zone being the only time he was happy with how that worked out for him. He sees story as a combination of character and situation, something that arises organically as the characters come to life and interact with whatever shitstorm has been flung into their lives. A story is a fossil, he tells us, an object found beneath the earth. Your job as a writer is to bring that fossil from the ground gently, a word at a time, discovering it's shape as you dig and prod. In this analogy, plotting is a jackhammer – sure, you get something out but, he argues, most of the time you’ll shatter the fossil in the process. You’ll kill the story.

It's exhilarating stuff, this notion of pulling stories from the earth of the subconscious, of writing as some kind of semi-hypnotic trance. The notion that this was how such towering genre classics as The Shining, Pet Semetary and The Stand were produced was nothing short of staggering for me. Actually, scratch that, is staggering, present tense. Again, I know some critics will snarkily express no surprise at this statement from King, but for me, as a new writer still bleeding his way across the finish line of his first, relatively short novel, this is both unsettling and scarily exciting information.

Elsewhere, he offers solid advice about the drafting process, some thoughts about critical readers and when and how to use them. One especially strong piece of advice, which I stick to fairly hard for the most part, is to place your story in a drawer once you're done, for at least 6-8 weeks, to give yourself some distance before coming back for the second swing. He also insists the key to becoming a good writer (assuming a modest baseline of ability)  is to read a lot and write a lot, and that there is no shortcut to that.

It is all perfect advice? Of course not. For starters, it was written in 1999, and one or two things have happened in the world of publishing since then. Though I think the advice on how to pursue an agent probably holds up fairly well, there's a veritable minefield of options that were not available when this book was first written, and in that sense this part is very dated. It's a small point, and one that doesn't detract very much from the book overall, but I'd certainly advise a brand new writer that in this particular area, there is a lot of additional reading to be done.

The main thing, though, is just how damn inspirational it is. When I first read King saying “Do you really need permission to write? Very well, I give you permission.” an entire bank of lights flicked on in my head. When he said that all you need to do is take it seriously and do it every day, when he talked about having a railroad spike above the desk where he wrote when he started out, filled with rejection slips – and that's Stephen King! - again, it was revelatory. He wasn't born a world conquering author – he worked and worked and worked at it. And yes, he had natural talent, and yes at some point he got lucky, but mainly, he worked and got better. Also... well, also he tells us that he'd do it for free if he had to, and this anecdote provides the proof of that statement, because for years, he did.

And this is why I wanted to write about this book for this project. Because while I could argue almost indefinitely with others about a 'favourite' or 'best' Stephen King book, I am of the pretty firm belief, especially following this re-read, that 'On Writing' will come to be regarded, rightly, as his most important book. Because while his fiction will have inspired many into a love of reading, and of genre, I am positive that my experience with 'On Writing' is an utterly typical one. I am sure that there's an entire generation of writers working right now who are doing so as a direct consequence of picking up this book and being inspired by it, with countless generations still to come that will also do so. I truly believe this book will secure King his greatest and most enduring legacy – hundreds of thousands of storytellers who will take up the pen as a direct result of reading 'On Writing'.

For a man clearly so in love with the endless thrills and possibilities of storytelling, I can think of no finer achievement. I know for myself that any success I achieve with my writing, modest or huge, will be forever indebted to this man, and this book. I will not be alone in this.

Or as King Says at the end of the On Writing section:

“Writing isn't about making money, getting famous, getting dates, getting laid, or making friends. In the end, it's about enriching the lives of those who will read your work, and enriching your own life as well. It's about getting up, getting well, and getting over. Getting happy, okay? Getting happy...
...perhaps the best of [this book] is a permission slip: you can, you should, and if you're brave enough to start, you will. Writing is magic, as much the water of life as any other creative art. The water is free, so drink.

Drink and be filled up.”

PS – I mentioned above that claiming that only 50% of the book was the actual 'On Writing' bit was deceptive for a couple of reasons. The second of those reasons, which I only realised on this last read-through, is that both the 'CV' chapter and the 'On Living: A Postscript' section (which deals with the Minivan accident) are also, in point of fact, master classes in short form storytelling from a man at the height of his powers. They are so fantastically well written that I didn't even notice it the first time; only now, looking back with the benefit of four years of my own modest experience at the coalface of prose, do I see just how stunningly well written these sections are. If you haven't recently, I implore you to return to this book and treat yourself – you will immediately see what I mean, I think.


Kit Power lives and writes in Milton Keynes, England, and insists he’s fine with that. His short dark fiction has appeared in many venues, including Splatterpunk Magazine, ‘Widowmakers: The James Newman Benefit Anthology’, the ‘At Hell’s Gate II’ anthology, and others. He also has two novellas out – one published with Black Beacon Books (‘The Loving Husband and the Faithful Wife’) and another self-published (Lifeline). Check out his Amazon author page here

He also writes for the Gingernuts Of Horror website, chiefly a monthly series entitled ‘My Life In Horror’ If you’ve enjoyed the above post, essays of a similar quality can be found here.

He’s also the lead singer of near-legendary long haired rock and roll band ‘The Disciples Of Gonzo. Find them here.
at 09:00

Email ThisBlogThis!Share to TwitterShare to FacebookShare to Pinterest
Labels: on writing