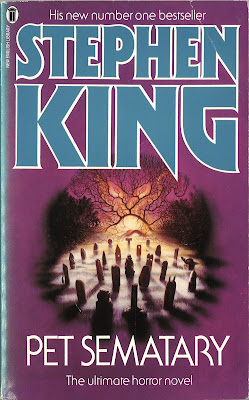 Spoilers contained. If you haven’t read the book yet, it’s great, go read it, then come back and read this.  I don’t want to spoil the surprises on the way.

This book owes its origins to a time in Stephen King’s life when he was teaching for a year at his Alma Mater, the University of Maine at Orono.  Whilst working there he rented a house on a busy road in Orrington. The road was not kindly to the local pets and the children living nearby has built their own pet cemetery in a field behind the King’s house.  Their daughter buried the family’s pet cat Smucky there themselves and there was a near miss on the road when one of his two sons (not Joe – the other one – Owen) was narrowly missed by a truck on the road outside the house.

According to Wikipedia, King thought he’d gone too far with the subject matter but was persuaded by his wife Tabitha and close friend Peter Straub to send it to Doubleday.  If Wiki can be believed on the subject, then we can be very grateful to the pair of them for doing this.

Pet Sematary is one of King’s greatest achievements.  After 28 years since I first read it, it still holds strong.  I was worried when approaching it for a reread that maybe my 16 year old self wasn’t critical enough a reader to spot a great book. God knows I’ve reread some from that time in my life and wondered what I ever saw in them.

But I wasn’t disappointed. The themes in this book are eternal, death and family and grief. These themes are so timeless that, combined with King’s folksy but persuasive narration and his great ability to give us real human characters on the page, the book can’t fail but to keep its power. The section where Gage’s accident is described from his point of view, and that line about “your parents didn’t scream at you when it was just a game” was still seared in my brain nearly 30 years later.  We all know the bare bones of the story, an Indian burial ground where if you bury your dead loved ones, animal or human, they come back. I’m not sure if this is one of the earliest examples of a cursed Indian burial ground stories or not.  I probably should have researched that before sitting down to write this review.

Despite my memory of this being a non stop supernatural thriller, huge swathes of this novel (and my copy is 424 pages) go by with no supernatural elements at all.  The first openly supernatural event is the appearance of Pascow’s ghost on page 77.  After that, and Louis’s rationalisation of the events as bad dreams and sleepwalking, we have a good 50 pages before Jud leads Louis on the fateful trek to the burial ground beyond the deadfall. From then on, we have more than half the books page count until the next time he even thinks of burying anything else there – part 2 of the book, which kicks off with Gage’s funeral  starts on page 229 and THOSE thoughts don’t start sneaking in for a good few chapters.

The intervening spaces are filled with what King does best, letting us get to know his characters. Louis is a great central character. King lets us into his heart so we grieve right along with him and we can sympathise and agree with the decisions we know will bring much grief (after all, if they came back from the dead as nice as they were before they died, the story would be much less satisfying on the horror side of the equation – and this is a true horror novel). Jud is the kindly neighbour we all want in our lives. Rachel, Ellie and Gage are a flawed but loving family unit and they feel like we know them for real.

King almost built his entire early career on foreshadowing. This book is no exception.  While letting us into his character’s lives, he’s also dropping hints, some subtle, some not, as to how he’s going to destroy them. By the time Louis is under the spell of the Sematary and planning to dig up young Gage, the sense of dread is palpable.  The intercutting between the characters in the final third of the book is masterly, Louis on his personal road to hell, paved with the best of all intentions, Jud’s vigil and Rachel’s panicky race home dragged me helter-skelter through the final segments.

A great line from this section – “Unaware of these other happenings, like slow moving projectiles aimed not at where he was, but rather in the best ballistics tradition at the place he would be, Louis sat and watched the HoJo color television set.” – This may be one of the best foreshadowing lines he’s ever written, letting us know that all events are converging, and with the comparison to bullets built into the quote, we know it ain’t going to be nice.

The ending is almost as heartbreaking and horrifying as paper can stand. This has long been one of my favourite Kings and it remains as high on the list after the reread.

There are nice nods to his other books, Cujo gets a mention in the early chapters, and in Rachel’s heart-stopping race  back to Ludlow she briefly considers stopping at the town of Jerusalem’s Lot. Going back to the origins of the story, the first grave we see in the innocent part of the Sematary is for a cat called Smucky, and the trucks which charge down the road with lethal regularity are from a company called Orinco.

I recommended this book as a Halloween read for my book club – who are occasionally vehemently anti-genre. Four of the seven of us there last night had never read a Stephen King – one of us still hasn’t sadly. From the others, everyone praised the writing style.  Although literary critics constantly lambast King’s prose as workmanlike at best, this group of literary novel lovers all thought his prose was excellent – one (the most horror eschewing of the group normally) used the words sublime, utterly brilliant and superb page turner. She also said that the characters were beautifully brought to life (I so wanted to steal that quote for myself but I have to credit her with it).

The build up of atmosphere was also universally praised as was the characterisation – although one person found Louis to be rather two dimensional. The punch up at the funeral was picked as a highlight by most of the group. The story was compared to Frankenstien and the old tropes of don’t interfere with nature.  One of the group (a fellow King fan) had first read this when pregnant with her daughter and she recalled how, when waiting for her medical checkups and reading this, she wasn’t doing her blood pressure any good.

There were some criticisms.  The question was asked, why didn’t they build a fence at the bottom of the yard?  Which is a fair point I suppose. Although there would still have been a gate to run out through... and I have 8 foot tall walls in my back yard and my cat still climbs over them without a problem.  Another in the group said that, despite now knowing why King is such a respected writer, the story wasn’t to his taste and he won’t be reading any more (that’s what he thinks, there are many more Halloween reads for me to recommend.). The lady who described the prose as sublime had similar reservations in not liking the story. Another enjoyed it but said it was nowhere near as good as the Somtow novel I recommended last year.

Overall the group scored the book reasonably high and sparked a lively discussion. And hopefully, a few of them will pick up more of King’s back catalogue.  In which case my work here is done.


addendum:
With thanks to Ross Warren for the nod - "The Wikipedia bit is wrong. Tabitha hated the book and King agreed that it should go in the drawer and not be published. It only got published as King had to submit one more novel to get out of his restrictive Doubleday contract."

Marc was born at an early age. He hasn't died yet.  He has a small number of short stories published, most recently in Not Your Average Monter, A Bestiary of Horrors edited by Pete Kahle. His day job is so exciting that he has to lie if he says it's exciting.  His hobbies include breathing and not stepping in front of buses.
at 09:00