Cycle Of The Werewolf, reviewed by Nadine Holmes 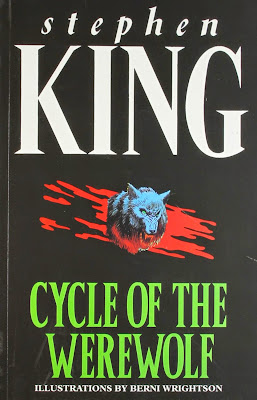 When asked which would be my favourite King novel, I would be hard pushed to pick just one. However, I can tell you the book that cemented me to be a life-long fan, and it was Cycle of the Werewolf.

For me, the werewolf is quintessentially a creature of horror, and not an excuse for some pretty Native Americans to show off their exquisitely developed pecs. They are a representation of the bestial side of humanity, the feral and unhindered darkness that dwells deep in all of us; then once a month when the full moon hovers overhead, it roams unfettered, wreaking havoc in its path. This book was one of the stepping stones to a life time interest in all things lycan, though I didn't realise it at the time of my first reading.

Originally published in 1984, Cycle of the Werewolf is a relatively short horror novel and uniquely features illustrations by renowned comic book artist, Bernie Wrightson. The story is set in the small town of Tarker’s Mills, an isolated community in the state of Texas. Nah… I’m only kidding, it’s in Maine. C’mon … this is King, after all.

The story spans a single year in Tarker’s Mills, with each short chapter covering a single month. As each month goes by, the body count starts to rise and the murderer is inevitably called ‘The Full Moon Killer’.

The story centres around a young paraplegic called Marty Coslaw. As the town is gripped in fear, a curfew is placed and the Independence Day celebrations are cancelled. Marty is disappointed in missing out on the firework display, but he is consoled by a gift of fireworks from his immature and irresponsible Uncle. While Marty enjoys his festivities in secret one night, breaking the curfew, he is attacked by the werewolf and narrowly escapes after he injures his attacker in the eye with a rocket.

Marty identifies the attacker to the authorities as a werewolf. Of course, his parents are sceptical. Believing he is in shock, they send him away for the rest of the Summer. When he returns in the Autumn, while out trick-or-treating, he discovers one of the townsfolk missing an eye – sporting the same injury he had inflicted upon his attacker in the Summer. Admittedly, the perpetrator of the crimes is not that well hidden from the reader, but the tension of the murders more than makes up for it.

One aspect I found interesting about the book was that despite denials from law enforcement, the townsfolk seem to quickly accept the ‘werewolf’ theory, if only in whispers and quiet corners. This is why it is so brilliant that King continues to set his novels in Maine, a US state I also have a particular fondness for and fascination with. If this novel had been set in a sprawling metropolis, you would get behavioural analysis talk from gritty cops over their coffee and donuts, as they tracked down the latest in a long line of serial killers. Only in small town America is it believable that the fantastical is more readily accepted. This small community, in their relative seclusion and a land peppered with folklore, accept the notion of a supernatural creature easier than any city folk would.

Each chapter is full of the colourful and descriptive narrative that you expect from a King story. King is an expert in characterisation and no one does it better in my opinion. In just a few pages, nay paragraphs, you get to know each and every victim in the final moments preceding their bloody demise. The early chapters focus on individual characters, but the story starts to merge as the townsfolk start to unite in the common goal of finding the killer.

The overly critical amongst you (you know who you are) may spot that there are a few inconsistencies, but these are well documented. In early chapters, the werewolf is described as having yellow eyes, but later they are described as green. Also, when Constable Neary is killed in his truck, it is described as a Dodge truck, but a few paragraphs later it is described as a Ford pick-up.  King himself also makes a disclaimer at the back of the book, saying that he took artistic liberties over the frequency and timing of the full moon for the sake of the narrative.

For those of you who think they are not familiar with the story, you may know more than you think as it was made into the 1985 film Silver Bullet featuring Gary Busey and a young Corey Haim. The novel itself is a quick read, with only 127 pages (including the artwork) and it is definitely doable in one session.

With what appears to be a very simple premise, it is King's writing that lift's it to a story worthy of your time. My one and only criticism is that the story is perhaps a little underdeveloped, and I would have much preferred a full length novel, perhaps an insight into the town's folk between the full moons. That being said, I found out only a couple of years ago that this book was originally intended to be a calendar featuring Wrightson’s artwork, and only a small vignette from King. Finding this too restrictive, King elaborated on the story slightly until it became the short novel we know today. It cries out for a graphic novel makeover.

If you haven’t read the book – grab yourself a copy, you won’t be disappointed.

Nadine (or @MadNad as she is known on twitter), is a reader and occasional reviewer, the eloquent half of The Eloquent Page, archer, knife thrower, usually found covered in flour in the kitchen, and the baker, fudgetier, reviewer and recipe guru at Mutherfudger
at 09:00

Email ThisBlogThis!Share to TwitterShare to FacebookShare to Pinterest
Labels: Cycle Of The Werewolf