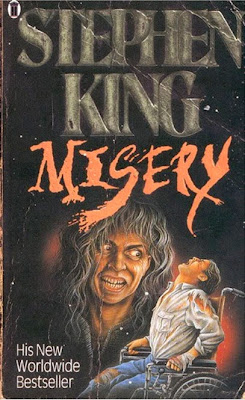 “I’m your number one fan”, a phrase that’s embedded in culture. Sure, it was around before "Misery", something that authors would hear at public appearances or in fan letters, but Stephen King’s appropriation of the phrase gave it fresh life, and made it particularly creepy.

I first read "Misery" in 1987, and it quickly became one of my favourite works by King. Don’t think anything will ever dislodge "Salem’s Lot" from the top spot for me, but it’s right up there. Apparently one of King’s own favourites, Paul Sheldon does feel more personal than most of his author protagonists. At the time, it was quite a change of pace for King. It was intended to be released under his Richard Bachman pseudonym, but when that identity was uncovered, "Misery" came out under King’s own name.

It’s difficult for me to disentangle my love for the book from my love for the 1990 Rob Reiner movie adaptation, and certainly, rereading the book in preparation for this review, now I can only see James Caan and Kathy Bates on the page, blotting out whatever faces I gave them on my first reading. If the adaptation had not been so memorable, perhaps it might have faded into obscurity and I could read without comparison.

Having just rewatched the film, I was surprised to find it differs a lot more from the book than I remembered. The book traps you in the head of Paul Sheldon, which really serves the claustrophobia of the piece, and has you, like Paul, second-guessing what’s going on in Annie’s noggin from moment to moment. Writers spend so much of their time trapped in their own heads, it’s entirely appropriate for the book to echo that. Screenwriter William Goldman opens out the story – possibly to avoid the need for an intrusive voiceover throughout, and introduces a handful of new characters, in the form of Buster and Victoria, Sheriff and Deputy (as well as husband and wife) of Silver Creek, and Marcia Sindell, Paul’s agent.

I was amused to see that ‘Novel Paul’ considers and rejects trying to put the Novril capsules he’s managed to squirrel away into Annie’s food or drink, as the bitter taste would be a giveaway, where ‘Movie Paul’ does just that, in a film highlight variation of the old switch the wine glass routine.

The book is able to do more with Paul’s frustration as the battered second hand typewriter Annie bought for him starts throwing more and more letters, making the trial of getting the book written all the more difficult. Excerpts of the draft and dotted throughout the book, with all the ‘n’s written by hand. As Paul suffers more and more, the quality of the handwriting suffers too, adding a new dimension to the story. The movie mentions the missing n briefly, and Annie offers to fill them in for him, but it’s glossed over almost entirely.

King goes into flights of fancy with the African setting of Misery’s Return, and it’s bee-specific plotline, which seemed very King Solomon’s Mines-like. Goldman’s screenplay, perhaps wisely, excises it almost entirely. In the book, Paul fakes out Annie when he burns the manuscript in front of her. He has the real pages under his bed, and has burned a bunch of blank pages under the title page. In the film, he really burns it – a final twist of the blade for his captor.

King is more prepared to mutilate his protagonist than Goldman, thought that is not to say that Goldman lets him off lightly. ‘Novel Paul’ loses first a foot, and then a thumb in fairly short order, while ‘Movie Paul’ gets a hobbling scene that is almost as memorable a piece of film history as Psycho’s shower scene. Still stomach-turning to watch today, if anything, it seems worse than having a foot severed with an axe and cauterised by blowtorch.

So, which version of "Misery" is best, you ask? Well, don’t ask me, you dirty bird. Each has their strengths. Dialogue-wise, Caan and Bates inhabit their characters perfectly. I can’t imagine a better cast, and much of their interplay is taken straight from the book. It’s a shame to lose the claustrophobia of Paul’s thoughts as he moves from confusion to fear, sneakiness to hatred. He really does think like an author, running through possibilities, working out the worst scenarios, or using skills for lock-picking researched for the Fast Cars book he had just written. There’s a scene in the book where a young law officer called Kushner visits Annie’s house on a routine sweep, and Paul is able to signal his presence by throwing a paperweight through the window, and getting him killed as a result. Annie holds Kushner’s death and Paul’s responsibility for it, over his head. Partly it’s the worry that any future attempts to shout to the policemen who start to visit the Wilkes property more often as the noose tightens will just get them killed and Paul punished further, in a Stockholm Syndrome manner, but that soon gives way to Paul’s desire to gain his own revenge upon Annie. Kushner’s death is repurposed to give Sheriff Buster an “oh no” moment for the audience as he stumbles upon Paul lying on the cellar floor, just as Annie gives him both barrels. Goldman and Reiner had done such a good job of characterising Buster, his death is every bit as moving as the final battle ahead between Paul and Annie.

One final thing. Possibly the scene, minor though it is in the grand scheme of things, that hit me personally more than any other in the book, and transferred pretty much wholesale into the screenplay. Rocketman. King aficionados will probably know just what I’m talking about (and if you’re not a King aficionado, I have to ask whether you missed the left turn at Albuquerque to end up on this blog…) Annie is berating Paul for his first effort to bring back his heroine Misery Chastain from the dead. She calls it cheating, because he comes up with a hokey experimental blood transfusion deux ex machine to dig Misery out of the hole he put her in. As his number one fan, Annie obsesses over the plot details and although she wants Misery to live again, she won’t accept Paul cheating to achieve it by contradicting plot elements from the previous book.

She launches into an anecdote about her childhood, where she would go to watch movie serials every week at the local fleapit cinema. Her favourite was Rocketman, and how each chapter would end with a cliffhanger. One week, he had been knocked unconscious in a car that had its doors welded shut, and ended up going over a cliff, where it exploded. She was thrilled to find out what happened, and raced to the movie theatre the next week, and the next chapter showed the cliffhanger from the week before, and this time, Rocketman got out before it went over the cliff. All the other kids cheered, but she stood up and raged at the cheating filmmakers – an early sign of her later character traits. King plays a great game of weaving elements relating to writing, and the nature of both writers and their readers all through the story, driving the plot and motivations of the characters.

As I read that scene in 1987, it triggered memories of my own, when King of the Rocketmen (which I seem to recall was the actual title of the serial) was shown daily in the morning during school holidays in the late 1970s, and I had a similar reaction to that cliffhanger escape, which I’d only seen the day before. I don’t recall bellowing at the screen that he didn’t get out of the cockadoodie car, but I still feel the outrage at being misled by filmmakers that I’ve rarely felt to that degree since. That connection between King and I is tangible and important on a personal level. I daresay for most people, it’s just a nice bit of character work, but I believe that one of the secrets of King’s success and longevity is his ability to tap into similar personal connections for pretty much every reader. Hail to the cockadoodie King, baby!

Jay Eales was born among the dying embers of the Swinging Sixties, in a rural Northamptonshire town where the Co-op was (and remains) King, and almost every family was in thrall to the boot and shoe industry (May it Rest In Peace). Jay has written, edited and published a variety of prose and comics, mostly under the Factor Fiction imprint, especially The Girly Comic and Violent! comic anthologies. He was News Features Editor for the award-winning Borderline – The Comics Magazine between 2002 and 2004, and co-organised Caption, Britain’s longest-running comic convention between 2006 and 2011. He is currently the Graphic Novels Reviews Editor for the British Fantasy Society. His comics have been published by Constable & Robinson, Image Comics, Accent UK, Futurequake Press and Borderline Press to name but a few. His prose has appeared within the pages of anthologies from the likes of Obverse Books, Murky Depths, Hersham Horror, Dog Horn Publishing, Rainfall Books and The Alchemy Press. His first novel progresses in fits and starts. If you simply must know more, then www.factorfictionpress.co.uk is a fine place to start.
at 09:00

Email ThisBlogThis!Share to TwitterShare to FacebookShare to Pinterest
Labels: Misery