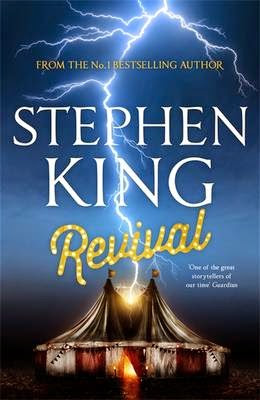 REVIVAL is a 2014 novel by Stephen King, the popular master of horror fiction. The story is told through the eyes of the quite ordinary Jamie Morton whose life at times intersects with that of Charles Jacobs, a man whom tragedy has transformed from a peaceful, friendly minister into a cynical occultist obsessed with the more forbidden and secret aspects of electricity. As periodic witness to this growing obsession and an eventual test subject and victim of this forbidden knowledge, Jamie must eventually confront the master of electricity and ultimately risk his life to put an end to the escalating madness.

Inspired by both Shelley’s "Frankenstein" and Machen’s "The Great God Pan", this book is written like a classic early 20th century horror tale, told in a slow succession of disquieting moments, building to the utmost revelation, which makes its appearance only near the end. Reading it can seem a chore at times due to its leisurely pace, as the occasional glimpses into the minister’s progressing obsession with electricity are insufficient to elevate Jamie’s more mundane life as a drug addicted rock musician to the level of interest that one might desire. "Revival" feels like a novella concept that has been stretched out to novel length. Still, most Stephen King stories are entertaining in ways other than the horrific, so the leisurely pace will likely not bother most of his diehard fans, the ones who love his way with quirky characters and storytelling.

In its final pages, "Revival" has one thing in common with the King classic "It" that some readers may find frustrating. Despite this, there are also to be found terrifying moments at the climax that will have many horror readers filled with dread; those readers, perhaps, who have not yet read Machen, Lovecraft or other writers of the deeply and disturbingly weird. In the end, Stephen King has accomplished what he set out to do: unsettle his readers.

This book is not for the impatient, but the payoff is definitely worth the trip.


David T. Wilbanks' short stories have appeared in Horror Drive-In, Postscripts and other publications. Together, he and Mark Justice wrote the post-apocalyptic DEAD EARTH series. His non-fiction has appeared in Horror World, Hellnotes and The Book of Lists: Horror. David lives in Minnesota with his wife.  You can find him online at his website or on Twitter at @davidtwilbanks
at 09:00

Email ThisBlogThis!Share to TwitterShare to FacebookShare to Pinterest
Labels: Revival