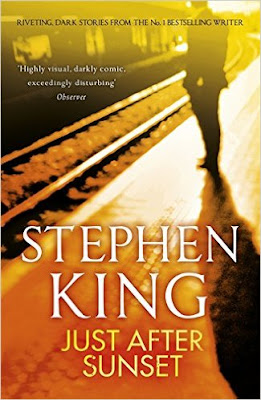 I’m here to talk about my favourite Stephen King collection since “Night Shift” - “Just After Sunset”.  If you knew me, I wouldn’t have to say how big a King fanboy I am but I’m sure I’ll provide enough evidence of my fandom before we’re done. Settle in, Constant Reader, and let me tell you a story.

I grew up surrounded by Stephen King. My mother was a huge fan, one who needed every new release on the day it dropped. I have fond memories of standing in line with her, waiting to purchase her copies of “It”, and later, “The Tommyknockers”. Then, years later, popping some corn and plopping down in the couch to watch the television adaptations of both of the aforementioned books. I recall cowering in the backseat’s footwell while my mother and her best friend watched “Pet Sematary” at the drive-in. Zelda’s first appearance literally made me pee my pants. I was nine years old. King helped me bond with my mother, and to this day, a simple mention of one of his books brings back fond memories, like a treasured song. In that regard, Stephen King is my favourite band.
One of my earliest memories tied to this collection (other than watching “The Cat from Hell” in “Tales from the Darkside: The Movie”, but we’ll get to that) is from 2004. I was at Walden’s Books and I came across a paperback entitled “Tales from the Borderlands”, which was the fifth book in the Borderlands series. I only bought it because there was a brand new Stephen King tale at the end, “Stationary Bike”. The multi-author collection was my first taste of authors like Bentley Little (an author I would seek out soon after and tear through his entire back catalogue in under a year) and the late/great Tom Piccirilli. But the story I remember most is King’s tale. Although Gary A. Braunbeck’s story about recovering and rebuilding the face of God, “Rami Temporalis”, is a great little ditty, too.

While King is not without his faults (I’m looking at you “Dreamcatcher” and “From a Buick Eight”), I feel this collection is among his best work. King’s previous collection, “Everything’s Eventual” let me down. The only story I really enjoy and still reread from that one is “The Little Sisters of Eluria”. The rest of the tales were timewasters at best. I thought more than half the stories in “Nightmares and Dreamscapes” were either just all right or boring; the other half are good fun, but nothing stellar. For a time, I thought the last well-balanced collection we would see was going to be “Skeleton Crew”, which has three of my all-time favourite King stories: “The Raft”, “The Jaunt”, and “The Mist”. But the collections I always return to, the ones I can reread time and time again without skipping a single story, are “Night Shift” and “Just After Sunset”.

While I will not be covering every single story in this collection, I will discuss the ones that pop into my mind without having to look at the Table of Contents.

“Just After Sunset” showcases Stephen King’s maturity of style and undying love of story. “The Gingerbread Girl” and “Harvey’s Dream” alone prove this. The stories could not be more different. “Harvey’s Dream” is a literary nightmare ala Twilight Zone, whereas “The Gingerbread Girl” is on par with some of the best suspense writing I’ve read. Both of these stories rely heavily on strength of character, and character development is where King shines. Then we have King riffing on much the same idea in “Rest Stop” and “Mute”. Those two stories are interesting slices from the same cake — bad people doing good deeds. Then again, I guess that depends on what you consider to be a good deed.

“Just After Sunset” also covers the longest period of creativity out of King’s entire catalog. “The Cat From Hell” is positively elderly in terms of King’s career, which spans five publishers (Doubleday, Viking, and currently, Scribner, with a pit stop at Random House and two detours with Putnam) - all that, from 1974 to present day.  “The Cat from Hell” was first released in Cavalier, during King’s years submitting to men’s magazines, and then filmed as part of the nostalgia-inducing, probably-not-as-good-as-I-remember “Tales from the Darkside: The Movie”. And, although I cannot be a hundred percent certain, the segment might have been my first taste of King. “N.” is the newest story, and probably my favourite. I’m OCD, so I relate to the titular character. The ending is classic Uncle Stevie. I’ve always been a fan of unhappy finishers, and King delivers them more often than not.

Whether King is grossing us out with “A Very Tight Place” (my second favourite story in this collection, because I like my fiction to affect me in some way, and the what-if in this tale is one of my worst nightmares) or aiming to bring tears to our eyes with “The Things They Left Behind”, he hits the mark with each and every story offered in “Just After Sunset”.

Finally, I love that King has always been honest with us about the quality of his work. He admits that the stinkers from his career actually do stink, but when asked which of his own works he loves the most, he’s been quoted saying “Isn’t it funny how your own farts smell the best?” I think he feels much the same way about “Willa”, the first story in the collection (and my least favourite), because he opens the afterword with the explanation, “This probably isn’t the best story in the book, but I love it very much…”

And that’s how I feel about “Just After Sunset”. You might not agree with me when I say this is one of King’s best collections, but I love it very much.

Thank you for your time.

Edward Lorn is a reader, writer, and content creator. He's been writing for fun since the age of six, and writing professionally since 2011. He can be found haunting the halls of Twitter, Facebook, Instagram, Tumblr, and Goodreads and he has blogs on both Booklikes and Wordpress, with such popular features as Ruminating On and Randomized Randomocity.  His Amazon authors page can be found here.

Edward Lorn lives in the southeast United States with his wife and two children, as well as two dogs, Ash and Coal (a.k.a. his Goombas). He is currently working on his next novel.
at 09:00

Email ThisBlogThis!Share to TwitterShare to FacebookShare to Pinterest
Labels: Just After Sunset