The Gunslinger, reviewed by Anthony Watson 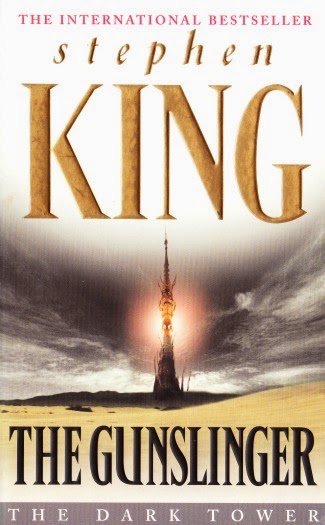 I’m guessing that I’m not alone in thinking, on completion of a Stephen King novel, that the great man is addressing me personally when he uses the term “Constant Reader.” For constant I am, having read all of his novels since "Carrie" burst onto the scene in a spray of pig’s blood.

Except… I’m partly in denial here. Yes, I’ve read all of King’s “mainstream” novels but – and, yes, it’s confession time – I haven’t read any of the  series.

Not entirely “Constant” then.

Happily, and due entirely to the King for a Year project, I can now change “haven’t” to “hadn’t” as the task of reviewing the first book of that series, "The Gunslinger", has fallen to me. Having now finished the book (and, it has to be said, the second in the series too) I can give myself a well-deserved punch in the face for being quite so stupid in making the decision, all those years ago, not to get involved in the series. Revenge, or so they say, is a dish best served cold. To make myself feel better, I’m applying the same principle to the series. It was the right decision not to read them straight away. Now I’m so much older I can fully appreciate them, the hidden depths, the allegory – and, best of all, I still have the pleasure of reading six new Stephen King books ahead of me.

I’m convinced even if you aren’t.

So. "The Gunslinger". What’s it all about then?

As alluded to earlier, it’s the first book of the series – a mix of fantasy, sci-fi, horror and western genres inspired by "Childe Roland to the Dark Tower Came" by Robert Browning. King himself has described the series as his magnum opus, his own version of "Lord of the Rings" – incorporating the majesty and imagination of those three mighty tomes but written for a modern readership, using contemporary cultural references and with far fewer elves and goblins.

It’s a quest story, the series’ main character Roland Deschain, the gunslinger of the title, is on a mission to discover the mysterious . "The Gunslinger" itself is made up of five short stories which were all originally published separately but the narrative arc is continuous through them. To use up to date jargon (something that always fills me with dread given that I stopped keeping “up to date” round about ten years ago) this is an “origins” story, introducing Roland – and his quest – but using flashbacks to fill in (part of, at least) his back story and that of the world he inhabits.

Roland comes straight out of the western genre although his back story hints more at medieval/Arthurian folklore but the mix of genres – a post-modernist’s wet dream – is handled perfectly. Throw in some post-apocalyptic imagery and contemporary cultural references (the song "Hey Jude" crops up on more than one occasion) and what you have is a truly entertaining, and engaging book. In the hands of a lesser author this could have turned out to be a car-crash but King is the master of this kind of thing and everything flows together perfectly.

One thing I was struck by on reading the book were the religious overtones and influences on the story. At one point a man is raised from the dead; a sacrifice akin to that of Isaac provides a crucial turning point in the plot; Roland wins an early duel against a giant of an opponent with a falcon called David; an important conversation takes place at a location called … It may be too much of a stretch to align Gilead (Roland’s place of origin) with but I wouldn’t be surprised…

"The Gunslinger" also introduces The Man in Black – an individual pursued by Roland from the beginning of the book and who becomes his nemesis. Given that this review is occurring some thirty odd years after the initial publication of the book it would be disingenuous to pretend not to know who this character is but then, there may still be Constant Readers out there who haven’t yet embarked on their own Tower quest so I’ll make a Stand on this and not give too much away, suffice to say that it’s an example of the self-referencing and crossovers that are so much a feature of King’s writing. It’s The Man in Black who relays to Roland – albeit somewhat abstractly – just what the dark Tower actually is: In essence, a hub at the centre of the universe where realities converge. (Probably). There’s much metaphysical to and fro-ing in this conversation and King introduces some interesting, and it has to be said, plausible concepts. (Much to the chagrin of men everywhere, when discussing the mysteries of the universe, it’s elucidated that it really is all about size).

"The Gunslinger" is a short book – especially by King’s standards – but it packs a lot in. It’s a marvellous introduction to the series with exactly the right balance between back story and hints of things to come. The number nineteen has a significant role to play in the book and King has ascribed mystical qualities to the number. The introduction to the book is entitled On Being Nineteen – which was the age King was when he first had the idea for the series. Nineteen’s an arrogant age, he tells us, and therein lies my redemption as that’s precisely how old I was when "The Gunslinger" was first published and I made the decision not to lower myself to read some bloody fantasy nonsense.

Anthony Watson is co-founder and co-editor of Dark Minds Press (http://www.darkmindspress.com/) alongside Ross Warren. Dark Minds Press have so far published two collections of dark fiction – Dark Minds and Darker Minds and are currently working on the third book in the series Darkest Minds for publication in 2015. As well as this, he runs a horror review blog “Dark Musings” (found at: http://anthony-watson.blogspot.co.uk/).

He also writes and has been most recently published in State of Horror: Louisiana from Charon Coin Press with his story Indigo. He has also been published in Sanitarium Magazine which featured his short story Elder’s End and has a story Interstice scheduled for inclusion in the next Spectral Press annual ghost story anthology. 2015 will see publication of his war/horror novella Winter Storm in a seven author collection.
at 09:00

Email ThisBlogThis!Share to TwitterShare to FacebookShare to Pinterest
Labels: The Gunslinger