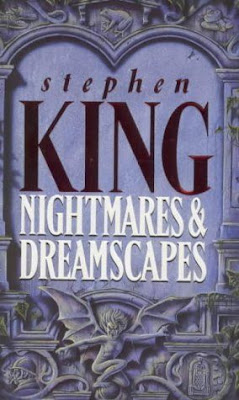 "Since 1980 or so, some critics have been saying I could publish my laundry list and sell a million copies or so, but these are for the most part critics who think that's what I've been doing all along. The people who read my work for pleasure obviously feel differently, and I have made this book with those readers, not the critics, in the forefront of my mind.”

Among the highlights of any SK collection is the introduction, which often contains semi-hidden pearls of wisdom and unrestrained glimpses into the mind of one of the greatest writers of his generation. The above short passage is at once insightful, humble, witty, and scathing toward his perceived detractors. Elsewhere in the often brutally honest forward, he claims to have read (probably in Ripley's Believe it or Not!) that people completely renew themselves every seven years, every muscle and organ replaced by new cells. He makes the point that it had been seven years since his last short story collection, "Skeleton Crew" (actually, it was eight, "Skeleton Crew" was issued in 1985, but who am I to argue with the Master?) and the first, "Night Shift", was released seven years before that. Strange, then, that the first line of the first story ("Dolan's Cadillac") should be...

I waited and watched for seven years.

Or maybe it was deliberate. Who knows?

It goes without saying that I've always been a huge King fan. I am the Constant Reader who he addresses directly so often. I guess you are too, or you wouldn't be reading this. And there was me thinking I was the only one. Still, at least we have some common ground to build on. One of the truly great things about literature is that it unites people of all ages and creeds and from all walks of life. King's work has certainly done that. From the long-haired pulp paperback-buying hordes of the seventies, right up to the mobile phone waving, Dome-loving Gen Y, King speaks to us all. I plucked my first SK book from my older sister's collection of scary paperbacks soon after I was mature enough to decide what I wanted to read. It was the seminal "'Salem's Lot". And since then I've been hooked. I've read the vast majority of his books at least once, and there are some I've read several times. "Nightmares & Dreamscapes", originally published in 1993, isn't one of them. It's been at least 20 years since I last opened it, which is one reason I thought it might be cool to revisit for this project.

The first thing I noticed is how different everything is. Obviously, the book hasn't changed. The book will never change. I have. And I always will. When I first read this book I was in my early twenties, and still living with my parents in the Welsh valleys. I had a car, a girlfriend and a crappy job putting things in boxes. That was half a lifetime ago, and a lot has changed since then. I've lived in different places, changed jobs, relationships have come and gone, and I sold my Hyundai Sports Coupé years ago. SK has probably been the only constant. Him and punk rock. Time changes everything, not least your perspective on life.

I smoked a lot of weed in my twenties, which may account for the fact that I have no recollection of reading several of these stories whatsoever. I sort of remembered "Dolan's Cadillac", but it would be a huge understatement to say that I didn't fully understand the complexities of it all back then. On the surface, not much happens, and it would be easy to dismiss it as a bloated, overlong diatribe about a man with a chip on his shoulder digging a big hole. But like so many other King stories, its more about the telling. The journey is more than half the fun. Other early highlights include "The End of the Whole Mess", which is about two brothers, one of whom is so ridiculously intelligent that he winds up using that intelligence to do something really stupid. In an interview with the Houston Chronicle, King claimed his own brother, Dave, was the inspiration behind it. We can only hope the real Dave King isn't as batshit crazy as his fictitious incarnation. "Suffer the Little Children", a little shocker about a teacher who may or may not seen going ever-so-slightly mad, is flat-out one of the most disturbing things in King's locker. Originally published in a copy of Cavalier in 1972, it's also one of the oldest here. One of the most interesting and noteworthy stories is "Dedication", a tale of witchcraft and woe which is by turns heart-wrenching and horrifying, with an almost palpable undercurrent of edgy tenderness.

Some of these tales struck a chord and lodged firmly in my memory, for whatever reason. And reading them again gave me a warm, fuzzy feeling. Like having a chat with an old friend you haven't seen for a while. "Rainy Season", a creepy little yarn about a couple facing a sudden rash of murderous toads, and "Night Flier", the story of a jaded newspaper hack on the trail of a serial killer, fall into this category. Both are so typically King that you would know who penned it just from reading the first few paragraphs. It's quite weird (and often hilarious) as a British guy to read Americans write about Britain. But the truth is, the odd cringe-worthy cliché (“Got a spare fag, mate?”) aside, King just about pulls it off in "Crouch End", which was originally written for an anthology with the title New Tales of the Cthulu Mythos. That pretty much tells you all you really need to know. Thank God the real Crouch End isn't quite as weird as the one described in the story.

A story I didn't fully appreciate first time around is "Home Delivery". As it unfolds, it changes from a "Delores Clairborne"-style yarn about a young mother preparing to give birth on a secluded island, into one of the greatest zombie stories ever told. The tale is expertly crafted, the textures and tones of the words King uses throughout adding to a hollow sense of isolation. Another tale that hits you harder after you have some years under your belt is "My Pretty Pony". It's probably the farthest thing from 'horror' in this entire collection, poignant in the extreme. It is a study on the nature of time, and how it moves faster as you approach the end of your run. The story behind this story is just as interesting as the story itself. As everyone probably knows, King's pseudonym Richard Bachman also had a pseudonym. Enter one George Stark.

In the early 1980s King was simultaneously working on a Bachman book called "Machine’s Way", and a book (which began life as a lengthy flashback incorporated into "Machine's Way") by Stark called "My Pretty Pony". The projects disintegrated, but "Machine’s Way" later morphed into "The Dark Half" while "My Pretty Pony" was buried in a file until 1989 when it resurfaced as one of those posh limited edition coffee table books none of us can afford.

"Nightmares & Dreamscapes" is a pretty weighty tome containing 24 stories and its pages numbering a grand total of 816. Included are five previously unpublished stories, the pick of which being "Ten O' Clock People", a close relative of "Quitters, Inc" from "Night Shift", which is set for an imminent theatrical release having been the latest of SK's works to be given the Hollywood treatment. It has to be said, this isn't his best book. It isn't even his best collection. There's a bit too much imitation and what can only be described as low-brow fan fiction for my liking. Derivative in the extreme, "Crouch End" is a homage to Lovecraft, "The Doctors Case" to Conan Doyle and "Umney's Last Case" to Raymond Chandler. It's all weirdly reminiscent of your favourite artist doing a covers album. It's entertaining enough, but you can't help but feel it's lacking something, making this less of a Greatest Hits and more of an unessential B-sides collection. I can't imagine even hardcore baseball fans being overly enamoured with long and tedious non-fiction piece "Head Down". If you don't know much about baseball, like most people outside the US and Japan, then you'd have no chance. Still, there's enough decent material here to make the whole exercise worthwhile and as we all know, King at his worst still shits all over 99% of other writers at their best.

C.M. Saunders tries his damnedest to emulate Stephen King, having had a handful of novellas and scores of short stories published in various places, but knows he is fighting a losing battle. His latest offering is the collection X2 on DeadPixel Publications. He graduated from putting things in boxes for a living many moons ago, moved to London via China, and now works as a writer/section editor for a men's fitness and lifestyle magazine.