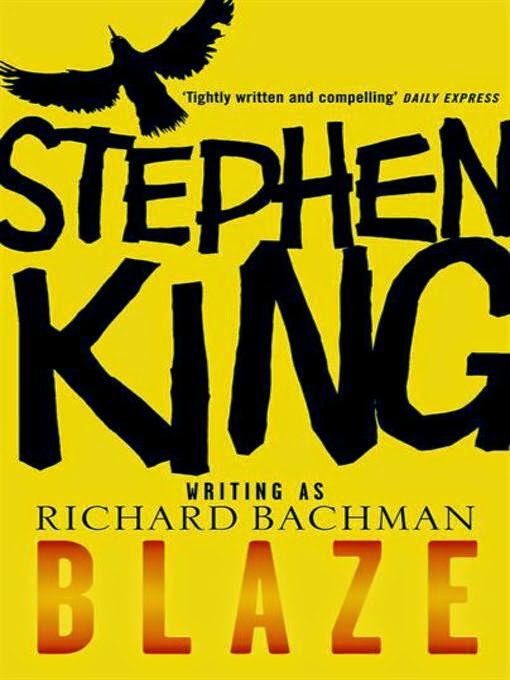 Okay, I came a bit late to the King For A Year party (didn't get my invite; lost in the post; sure, sure....), so by the time I realised I could participate all the best ones were gone (this is my preferred version of the 'Life is like a box of chocolates...' analogy - some fucker always gets to the good ones first); even the middling ones had been taken. In fact, the only one I could see that was left for me in the kitchen of this particular party was "Blaze" (hope that didn't come as a surprise, considering it should be in the title of the article...), one of the few Stephen King (or Richard Bachman if you're so inclined, but we'll get to that in a minute) books I hadn't, thus far, read. So I offered my mediocre reading/reviewing services to Mark and here we are.

But before we get to the book itself, a tiny bit of history (and something that has me a wee bit confused). You see, in the introduction to the book (certainly in the UK edition), King talks about - or more realistically, mythologizes - the provenance of this story. He clearly and definitively places it within that pantheon of Bachman books which were written over a specific period of time (as does the blurb on the back cover). However, something was niggling the back of my mind, telling me I had heard tell of "Blaze" before. And it turns out I had. It is referenced in a story related in the afterword to, if I remember correctly, "Different Seasons", where he talks about handing two manuscripts to his agent following the publication of Carrie - one being an homage to "Dracula" ("'Salem's Lot"), the other riffing on "Of Mice And Men" ("Blaze"). At no point is the name Bachman mentioned here and I'm not even sure if he'd been 'outed' as that author at the time "Different Seasons" was published. Is any of this relevant? I don't know, I just find King's occasional revisionism of his past interesting and I suspect that the Bachman name was used here as purely a marketing tool.

But I digress somewhat. On to the book. "Blaze" is a relatively short tale and a pretty straight one in that there are no convoluted plotlines or complicated stories. It is about the titular character Blaze, who is a humongous fellow, albeit a bit of a simpleton who is engaged in ongoing low-grade criminal activities. Heavily influenced in life by his recently deceased partner-in-crime George, he dreams of the 'one big score' which will set him up for life. That score happens to be kidnapping the new-born baby of a local wealthy family and holding it for ransom. He does so, more through accident than design (although he has the memory of George talking him through the crime) and the book pretty much then hops between Blaze in the present, as he looks after the child, and Blaze in the past as his tragic young life is related.

Now, first things first - this book is labelled 'hard-boiled', both by the publisher and by King himself in his intro. He talks about cutting off any excess, just putting his head down and going, making the prose economical and tight, just like those thrillers of old (I'm not especially well read in the 'hard-boiled' arena, but I have seen a lot of films so I think I've got it). The problem is (well, it's not really a problem, not at first), is that I'd have expected a tale like that to be full on action, to be 'pedal to the metal' stuff that barely lets you pause for breath. And the sentence structure lulls you into that illusion, that sense of short, sharp descriptions, little punchy lines. There's little of the lingering eye here, at least as far as the structure goes. However, it soon becomes clear that the actual action is rarely action-filled. In fact, what we are getting here is a character study that only superficially resembles its obvious influence, "Of Mice And Men". Yes it follows an oversized brute, who is actually well-meaning and gentle (for the most part) and the book beautifully details his almost innocent clumsiness in an unforgiving world (King is unsurpassed at this - think Tom Cullen or John Coffey to name just two). Yet, the passages set in the present (or the not so distant past, as King calls it - a world of yesteryear where mobile phones and computers don't yet exist) soon become long scenes depicting Blaze as he struggles with the basics of child-rearing - nappy (or diaper) buying, appropriate foodstuffs, how and when to feed and so on. It obviously all designed to show the growing connection and attachment Blaze has to the baby boy, but it's overdone - what is accomplished in a couple of scenes is stretched out to four or five. Not that it's terrible or anything, it's just a bit...dull.

By far, the scenes set in the past (Blaze's past that is) were the most evocative for me. And this is where, for me, the true story lay. I wouldn't want to hazard as to which scenes were from the original story and which were added by King prior to this publication (and he has rewritten, he says as much), but if pressed, I'd put money on the sections showing Blaze with his abusive father (a last violent act by his father is what causes Blaze to be not fully functioning in the brain department), with him at the boy's home he subsequently grows up in, the dynamics between him and the other boys there, his friendships, his first 'love' and his first sexual experiences as being written by a more mature King - all this is beautifully realised and gorgeously detailed and actually pierced my heart and caused a tear or two. This then, is why I think labelling this book (and others such as "Mr Mercedes", "The Colorado Kid" and, presumably, "Joyland", though I haven't read it yet) as 'hard-boiled' is perhaps a little misleading - to me, it is a distinct form of American literary writing which only uses the trappings of the 'hard-boiled' genre to tell a deeper story. There is some gorgeous writing on display here, and some absolutely cracking lines, especially one which I can't remember fully now, but talks of Blaze's father loving him but with a 'love that bites and bruises.' For me, that's writing par excellence. King's one of those writers who...well, you might not like his style, but you cannot deny the man knows how to write.

I did think though, that this book could have been a lot shorter and it's pretty short as it is. I think novella length would have been ideal for this and would have negated the need to pad out part of the story. It dragged for me about two thirds of the way though and whilst I was going through some serious personal issues, it had been dragging a bit prior to this. Still, it's not an awful book, just an average one, especially compared to King's own general output. I enjoyed reading parts of it, but I doubt I'd ever go back to it.

In summation then, a bit of a mixed bag. Some lovingly drawn scenes mixed with almost overcooked and laboured passages that drag the story out longer than it could have been. Average, with a few highs and few lows. Not an essential read from King, but not the worst either.

Paul M. Feeney is a near lifelong fan of Stephen King and certainly a Constant Buyer if not always a Constant Reader. In addition to this, he is attempting to infiltrate the publishing world himself by writing short stories of horror and dark fiction, and managing to talk people into actually publishing them (currently one available from Phrenic Press and two more forthcoming through April Moon Books and Sirens Call Publications). When not harrying the editors of various small presses and trying to jot down the multitude of short story ideas that occur on an almost daily basis, he divides his time between contributing reviews and articles to The Ginger Nuts Of Horror website, writing a long-in-progress novella, attempting his first novel and working a full-time job that sounds a lot more exciting than it actually is. He currently lives in the UK and can also be found on Twitter
at 09:00

Email ThisBlogThis!Share to TwitterShare to FacebookShare to Pinterest
Labels: Blaze