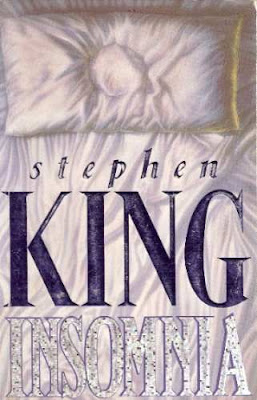 'Every day I woke up next to you was like waking up young and seeing…everything new.’

I discovered Stephen King in the early part of 1989 at the age of ten.  We were getting ready to move to live in Spain and I came across a box of things my older sister intended to throw out.  On the top was the thickest book I had ever seen. Even with the cover and thirty or so pages missing it was still the size of a brick.  The book was "IT" and took me about four months to read over that long summer in a strange country, and remains not just my favourite King book but my favourite book period.  Even with the missing opening, it was a few years before I experienced the devastating fate of young George Denbrough, it hooked me in and I have remained a Constant Reader ever since.

For this wonderful project Mark West dreamed up I would dearly have loved to pontificate at length why I believe IT to be King’s best book and to talk about what it means to me on a personal level, but alas, that nice fella James Everington beat me to it.  So I instead decided to go for one of the books I feel is a little under-appreciated.

"Insomnia" is a book that even the author himself has described as a ‘trying-too-hard novel’ so I may have bitten off more than I can chew with this.  Whilst I won’t try to kid you that it would make my top five, it would be in the lower spots of a personal top ten.  The re-read I undertook for this review was, if we count a couple of times listening to the wonderful audio version narrated by Eli Wallach, my sixth time reading it.  Beaten in this regard only by "IT" with eight reads.

So what has brought me back to re-read this particular book when there are so many new ones out there?  I believe the simple answer, true also for "IT", is that it’s the characters.  Ralph Roberts, Lois Chase and Bill McGovern introduce the reader to another side of Derry to that shown in the aforementioned "IT", but it is still recognisably the same town.  They have a great camaraderie in the opening chapters that has you feeling like you are sat catching up with old friends.  They also ground the reader in the everyday routine of a Derry retiree so that when the more fantastical elements come in to play it is all the easier to suspend your disbelief.

There are also, as is often the case with King, many memorable supporting characters such as Joe Wyzer, John Leydecker, Dorrance Marsteller and Gretchen Tillbury.  The villain of the piece, at least initially, is Ed Deepneau a neighbour of Ralph’s who suddenly goes off the rails talking about the ‘Crimson King’, the first of many ties to the Dark Tower series, and getting heavily involved in a campaign against the visit of Susan Day, a pro-abortion advocate.

The violent breakdown of Deepneau’s marriage is the stand-out scene of the opening section of the book and the theme of spousal abuse would be something King returned to for a more in-depth treatment in his next book Rose Madder.  Ralph steps up to be the saviour of Helen Deepneau and cements his place amongst this Constant Reader’s favourite characters.

As Ralph’s suffers more and more deeply with the malady of the title he begins to see strange colours and balloon strings around the people he observes around town.  Then one morning he sees two strange, short, bald men deep in conversation on the lawn of an elderly neighbour.

These bald men he discovers are agents for the purpose, who he names Clothos and Lachesis, tasked with cutting the balloon string auras, that Ralph has begun to see, on those that it is determined that their time on Earth has reached its natural end.  The third of what Ralph calls ‘the three little bald doctors’ is Atropos who is an agent for the random, tasked with cutting strings of certain people before their time. Ralph and Lois learn the majority of this, along of course with the reader, in an extended scene upon the roof of a hospital that is heavy on the exposition and actually hampers the pacing of the novel as it creates a race-against-time element to the climax that feels artificial and leaves the novel with quite an unbalanced narrative tempo.

The uneven pacing isn’t the only criticism that can be levelled at the book and it’s perhaps easy to see why some of King’s Constant Readers do not rate the book too highly.  There is some frankly atrocious dialogue when Ralph talks with Trigger Vachon; the editor really should have pulled old Steve up on the embarrassing patois he utilises for this particular character.  The manner of the Random and the Purpose is a little over-explained and creates a feeling that Ralph and Lois aren’t much more than pieces in the game of higher beings.  Also, Ed Deepneau comes close to appearing like a pantomime villain, lacking the believability of antagonists from other King books such as Annie Wilkes from "Misery" and Greg Stillson from "The Dead Zone".  Although this could be a conscious decision by the author to highlight how he is being manipulated.

In the explosive finale it is revealed that the person Ralph has been positioned to save is not in fact Susan Day, the expected target of the crazed Ed Deepneau, but rather a small boy named Patrick Danville who is important to the agents of the purpose and who will go on to play a significant role in the Dark Tower series.

It’s a satisfying ending (for an author often criticised for his endings) with tense action, realistic and rather emotional collateral damage, and is true to the events that precede it.  However, the proper ending, the one that elevates the book into my top ten and makes Ralph one of my all-time favourite King characters comes in the epilogue.

The reader is brought back into the lives of Ralph and Lois several years later.  They are now married and in the manner of the Losers Club from "IT" have forgotten much of what occurred in Derry and the three bald doctors.  But Ralph remembers enough to know that he has an appointment with Miss Natalie Deepneau and one last opportunity to ruin Atropos’ plans.

It’s a wonderfully handled section, the author filling us in on what has become of characters we have come to love over the course of the book and the ultimate fate of Ralph never fails to bring a tear to the eye.

Ross Warren is the editor of the 2011 anthology "Dark Minds" and the 2013 anthology "For the Night is Dark" from Crystal Lake Publishing and co-editor, with Anthony Watson, of the 2012 anthology "Darker Minds" and the 2015 anthology "Darkest Minds". Alongside Anthony he runs Dark Minds Press whilst his fiction has appeared in magazines such as Estronomicon and Sanitarium as well as anthologies from Crystal Lake Publishing and Knightwatch Press. He lives in Cheltenham, in the UK, with his wife Katarzyna and son Joseph and can be found online here and on Twitter here.
at 09:00

Email ThisBlogThis!Share to TwitterShare to FacebookShare to Pinterest
Labels: Insomnia