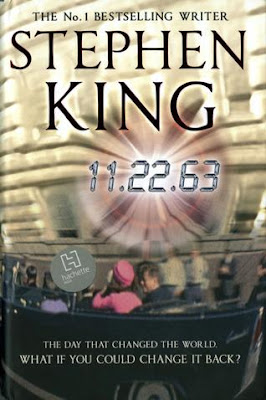 What if you could go back in time?  What if there was one moment of time that you could take back or change to make a better future?  That’s what Stephen King’s "11-22-63" is about.  A 'rabbit hole' in the back of a diner lets people go back to 1958.  Two men wonder, if you go back and save Kennedy, can you save the world?

I finished reading this novel and wrote the review after the Paris attacks, which meant that the ending to it resonated a lot more than I think it otherwise would have.  If we could go back in time and change something, would we stop those attacks?  Maybe we’d stop 9-11?  What would that mean for the future?

As it turns out, Al finds himself dying of lung cancer, unable to fulfill his mission.  He approaches Jake Epping and asks him to do it for him.  As he explains the rules of the rabbit hole to Jake, he says that the past is obdurate and it doesn’t like to change and you can’t help but wonder if the past didn’t help visit that lung cancer upon Al along with his pack a day habit just to keep him from meddling.

Another rule of the rabbit hole is that when you arrive, it’s always September 9, 1958 and exactly 11:58 a.m., but no matter how long you stay only two minutes have elapsed in 2011.  Jake can go back in time and spend five years, stop the Kennedy assassination, and when he comes back, he can pick up his life right where he left off.

King writes pastorally about the good old days.  The root beer tastes better.  The colour of the oranges is brighter.  The simple social etiquette of tipping your hat to ladies seems so much more civilized than the present.  It’s easy to want Jake to succeed and preserve this for me.

It’s just not that simple.  Jake tests a change by going back for a short stay to prevent the maiming of his adult student Harry Dunning and the massacre of Harry’s family at the hands of his drunken father.  Jake is mostly successful.  When he returns to 2011 and discovers that by saving Harry’s leg from his father, he’s gotten him drafted and killed in Vietnam instead.

Change sends the butterfly effect into high gear.  The past doesn’t like change and as Jake finds out, it tries to “harmonize” itself.  Motifs repeat in the form of names and events as the past tries to get itself back on track.  Ellen Dockerty is an echo of Harry Dunning’s younger sister Ellen.  Jake gets knee-capped by a bookie and ends up with a lame leg, echoing Harry Dunning’s lame leg.  What goes around seems to come around, and in some unexpected ways.

As I finished the book with its apocalyptic turn, I couldn’t help but think maybe literature harmonizes with reality.  Considering that stories are a mirror to reality, it seems likely to be the case; especially when I see the devastation of Paris, the curfews, the mistrust among people.

While waiting for Oswald to come back from Russia, Jake makes a life for himself, even falling in love with Sadie Dunhill.  The past harmonizes and this time and Sadie’s ex-husband attacks her, just as Harry Dunning’s father would have attacked his family, had Jake not intervened.  Jake does prevent Kennedy’s assassination, but Sadie dies, because the past harmonizes and once Jake saved Harry’s mother, someone else was going to die.

King wrote in the obvious second chance.  If Jake gets back to the rabbit hole, he can reset time.  He can return to 1958 and save President Kennedy and Sadie.  When he gets to the rabbit hole, there’s a guardian of sorts waiting for him.  He encourages Jake to go back and see the future he’s created.

He did change the future, and not for the better.  Those butterfly wings beat the hell out of the present.  Harry Dunning is still alive and Jake once more saves Harry.  This time Harry needs rescue from a group of teenagers that is going to prey on him because he’s wheelchair bound and an easy target.  It seems that time always intended for Harry to have a hard life.

There are earthquakes.  Countries are dropping nuclear bombs and people suffer from radiation poisoning.  This is not the prosperous, peaceful future Jake meant to create.  As the past harmonizes, it seems that literature and reality do as well.  At least it feels like it when I read about the new “present” in the book and I watch the news casts flashing pictures of broken windows and pieces of concrete littering the Paris streets.  I can’t think of anyone who would turn down the opportunity to correct even the slightest trespasses, but we don’t get that and neither does Jake.  Obviously, Jake isn’t getting a second chance.  He has to reset the timeline and return to his own time, leaving his love behind for the good of the whole world in all times.

I can’t reset the past.  I can’t bring back the lost lives.  If I could change what happened, it might not be for the best.  I’m not claiming that terrorism happens for a reason or that it will somehow make the world better, I’m saying it’s as complicated as the choice that King gives to his character who is trying to balance his own happiness and world peace.  All of our choices are mired in unknown outcomes.

The story gives me hope though.  In reality we’re never going to get the either/or choice that Jake Epping gets to make.  Reality isn’t literature where we’re going to get a nice beginning, middle and ending.  It’ll be years before history makes sense of what is currently happening.  What literature does is to give examples.  And for my part, I’m going to be a little less Jake-like in trying to control and direct what’s going on and a little more Harry-like and live the best I can with what I’m given.

Kim Hoelzli lives outside of London Ontario with her husband, grown sons and a half-blind granddog.  She is currently working on a novel about an LSD based nature commune set in the depths of the Northern Ontario.

Email ThisBlogThis!Share to TwitterShare to FacebookShare to Pinterest
Labels: 11.22.63