IT, reviewed by James Everington

IT was the first Stephen King book I bought myself. 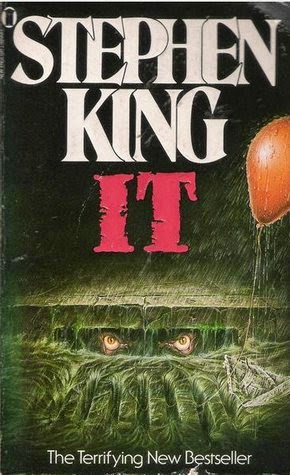 My dad introduced me to Stephen King when I was in my mid-teens, handing me his copy of Salem’s Lot (which I wrote about in my blog My Dad, Stephen King, And Me) and after that I worked my way through a number of King’s books from my dad’s shelves. I can’t remember exactly in which order, but I definitely read Thinner, Night Shift, and Eyes Of The Dragon in those first few months. And then, wanting to tackle one of the bulkier volumes, I pulled IT from the shelves and started reading. Instantly, with the scene of the George Denbrough’s paper boat swirling down the storm drain, I was captivated.

“Um, you might not want to read that one,” my dad said.

This wasn’t because he thought the horrors of Pennywise the Clown would be too much for me; not even because of that weird underage sex bit. No, it was because the copy of IT my dad had bought was defective – it had some chapters missing, and in their place were some earlier chapters, repeated.  As anyone who has read IT will know, there’s hardly a more apt book for such an error to occur in – for IT is built on a structure of repeating scenes. Because of this, my dad took some time to realise that the chapters in his copy were literally repeating. And at that point he seemed so annoyed, he just put IT aside in disgust.

Why didn’t he just buy a new copy? Why didn’t he at least take his defective copy down from the shelves? I never really knew why.

But, the next time I could get into town, I bought myself a copy of IT from the local WH Smiths.  And for me, much of the pleasure of reading IT comes from those repeating scenes, the sense of contrast between the protagonists trying to defeat Pennywise as children, and then again as older, more jaded adults. Much of the novel’s atmosphere comes from this sense of cycles repeating themselves, of never being able to escape your past, but never been able to blaze as brightly as you did before either.

Of course there’s much more to such a vast book as IT than this. It’s also one of King’s great novels about childhood, and friendship, and friendship’s passing. As a teenager contemplating moving away from home and adolescent friendships for the first time, those aspects hit me particularly hard. But then, reading IT again after all these years, they still do. For as is made clear, Pennywise is not just an evil clown or a weird alien- giant-spider-thing, he’s every horror. The horror of time’s passing and losing those things dear to us perhaps most of all.

I did move away from home, but my friendships from that time endured (and still do). I left my copy of IT on my bookshelves, wondering if my dad would finally overcome his annoyance and read it all the way through. When I came back from university for the Christmas holidays, the defective copy of IT was gone from his shelves. Mine was in its place. It had a few more creases in its spine.

IT remains my favourite Stephen King novel, or at least the one most deeply etched into my imagination. If you have never read it, I urge you to seek out a copy… But just be careful, if you get a second-hand one, to make sure it’s not my dad’s.

James Everington is a writer of supernatural fiction whose work has appeared in Supernatural Tales, Morpheus Tales and the Little Visible Delight anthology, amongst others. His second collection of short stories, Falling Over, is available from Infinity Plus and his monthly serial, The Quarantined City, is published by Spectral Press.

Oh and he drinks Guinness, if anyone's asking. You can find out what James is currently up to at his website.
at 09:00

Email ThisBlogThis!Share to TwitterShare to FacebookShare to Pinterest
Labels: IT