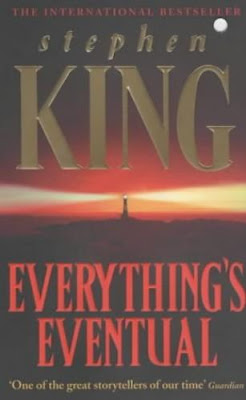 Short stories collections are the closest we authors get to the world of the rock star. Take a number of your finest (or your favourite) short works, slap them together, maybe tinker with the running order so it makes some sort of cohesive sense and, bingo; you have an album. All you need to do before release date is to pick a title. Some of my compatriots go the tried and tested route and pluck the collective moniker of their collection from one of the stories. Others (myself included), go for the mystical approach and pick a title that has nothing to do with any of the stories.

"Everything’s Eventual" is one of the former, a compilation that takes its evocative name from the seventh story. As ever with a King collection, the material falls into three distinct categories; ‘amazing’, ‘ok’ and ‘I won’t be reading that again anytime soon’. This is just a personal categorisation, by the way; not official in the slightest. I love the King’s writings but even I’ll concede that he can write some duff material on occasion. The fortunate thing about collections is that you can skip the not-so-good in favour of the great. To go back to my music analogy, it’s like skipping past that one song you can’t stand on an album.

Happily enough, "Everything’s Eventual" is a high quality piece. Of the fourteen stories contained within there are only three that I made a point of not reading and only two of those are stories that I don’t like. The third "The Little Sisters of Eluria"’ is a difficult one for me to fathom because I haven’t actually delved into the "Dark Tower" universe as yet Consequently, I have no idea what the bloody hell’s going on.

"L.T’s Theory of Pets" and "Lunch at the Gotham Café" just jar with me. I don’t know why but I find those really difficult to read.

That still leaves us with eleven tales to consider, and what quality tales they are. King revisits some well-worn horror tropes; the Devil, the Haunted Hotel Room, the Sinister Painting, even the Ghost Hitchhiker. You never get the sense that these are old tired clichés however. His usage of familiar horror frameworks still feel fresh. The narrator of "The Man in the Black Suit" - an old man guiding us through a bad childhood experience with the Devil – doesn’t come across as stilted or unbelievable. You can almost picture this grizzled old soldier sitting on a porch at sunset, his eyes worried and distant, as he remembers a sulphur smelling man swallowing a fish whole and taunting him about his mother’s death (a scene in which King really lays bare the cruel nature of Nature. He comes across as a mean minded bully).

In "Riding the Bullet", we get an inversion of the classic dead hitchhiker. A young college student trying to get home to his seriously ill mother and enduring the attentions of a crotch grabbing oldster, is picked up by George Staub. King doesn’t attempt to hide George’s very dead nature. Just before the protagonist meets his spectral driver, he comes across a headstone emblazoned with George’s name. The black stitching across George’s neck is also a massive giveaway away as well. As with "The Man in the Black Suit", George is revealed to have a callous bullying streak. He makes Alan (our hitchhiker) choose between who will die - Alan or his mother – and taunts him before Alan’s nerve finally snaps and he demands to be left by the side of the road.

The unpleasant side of human nature is a common thread throughout this book and they stand as testament to King’s skill at characterisation. From "In the Deathroom"’s Interrogator to the patronising Mike Enslin in "1408" and the ‘could be spook’ MR Sharpton in the titular story, we are given characters who reflect the more unsavoury aspects of the human race.

There are sympathetic characters to be had, however, it's not all nastiness. The comatose man of "Autopsy Room Four" is the victim of an unfortunate accident. Apart from his rubber glove fetish, he’s just a regular Joe unfortunate enough to be bitten by a venomous snake. Dink, the psychically gifted youngster of "Eventual" is a fundamentally decent kid who begins to question his role after researching his victims and finding that they aren’t enemies of the people, just enemies of the State. The protagonists of "All That You Leave Behind" and "That Feeling, You Can Only Say What It Is In French"’ are lonely troubled individuals but again you get the sense the sense that they are just normal decent people. It’s the ordinariness of the people and their surroundings that make this collection work so effectively. My personal favourite of the entire book goes so far as to use an everyday object to terrifying effect.

"The Road Virus Heads North" is the best of the bunch and one of the few things I’ve read that genuinely unsettles me (which is why it gets the biggest shout). It concerns a painting imbued with the dark and also a disturbing ability. The painting is a kid in a muscle car just driving –standard stuff until you notice the man’s sharp teeth and gimlet eyed stare, created by a mentally disturbed artist who killed himself not long after the piece’s completion. Enter our hero, Richard Kinnell, horror author and seemingly nice bloke, who buys the painting after noticing it at a yard sale. From here on in, things get decidedly creepy as the car in the picture seems to be heading in Richard’s direction. Understandably freaked out, Richard tries his best to get rid of the ‘Road Virus’, dumping it, even trying to burn it but the thing defies all attempts to destroy it. In the final paragraphs we’re left with the painting now changed to the car parked outside Richard’s house, and the heavy tread of footsteps climbing up his stairs.  This story is made creepier by the fact that this painting actually exists and is owned by King. Whether it has come to life at any point is a question only the King can answer.

So there you have it. All of us bonded by our love of King’s work have our favourite collections. Some go for the raw energy of a fledgling horror legend as demonstrated by "Night Shift"; others prefer the slash and burn straight forward horrors of "Nightmares and Dreamscapes" or "Just before Sunset".

For me, "Everything’s Eventual" is the premium collection. King takes us down familiar roads with familiar fears, but makes the journey interesting, lively and unsettling. This is one I’d definitely recommend.

J. G. Clay previously reviewed "Desperation" on the King For A Year blog
at 09:00