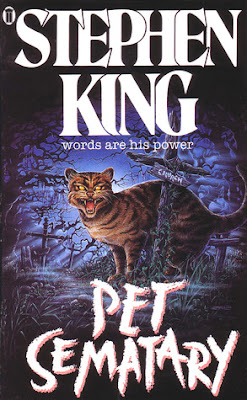 I’m pretty sure that “Pet Sematary” is the first King novel I ever read (not counting stealing “Nightmares and Dreamscapes” off my father’s bookshelf, reading one, then putting it back before anyone noticed I was reading horror) and it remains my favourite. And I’m in good company in that regards since King himself says in his introduction: “When I’m asked (as I frequently am) what I consider to be the most frightening book I’ve ever written, the answer I give comes easily and with no hesitation: Pet Sematary… All I know is that Pet Sematary is the one I put away in the drawer, thinking I had finally gone too far.”

Not sure at the time if King’s books were for me, I rented “Pet Sematary” out of the library over Christmas one year. I was expecting a straightforward tale about supernatural pets coming back to haunt their owners, but I couldn’t have been more wrong. This is a story about death and the human attitude to it. Within the pages of "Pet Sematary", King explores viewpoints of the young, the old, the hardened medical professional, and those with a phobia about death.

As I always am when I read King, I was surprised at just how much of the book is taken up with 'mundane' matters – such as the family settling in to their new home, Ellie’s first day at school – before the horror really starts to pile on. But for me, that is King’s charm. His plot is straightforward, but his characters are complex and his sense of foreboding is subtly done. Even as he’s describing the family readjusting to life, we are introduced to Rachel’s intense phobia of death, we follow Ellie’s natural learning process as she comes to terms with the idea that both people and pets die, and we see Louis’ own pragmatic and accepting attitude to mortality with the death of Victor Pascow. Not only that, but Louis’ thoughts upon Pascow’s death - thinking of how close he himself came to hitting cyclists as he drove into work that morning - hints at what is to come. We can all of us relate to the experience of the “close call”, where but for a driver’s alertness or quickness on the brakes, a terrible tragedy might have occurred. In Pascow’s case we see what happens when that close call becomes reality, and this theme is also something that is examined again later in the novel.

What struck me when I re-read it for this review was just how much each character reverses their attitude to death by the end of the novel. In the beginning, it is Louis who is accepting of death while Rachel has an intense phobia and Ellie simply has no experience. It is Louis who is taken by Pascow to see the danger of the Sematary, and it is Louis who notices the change in Church the cat, while it’s made plain that Ellie and Rachel don’t – or at least, don’t in the exact same way. Yet in the last third, Louis is blind to all the warning signs, while Rachel has dark premonitions and Ellie is now the one experiencing nightmares with Pascow.

And yet this role reversal is hinted at even during the opening chapter, when Gage is stung by a bee and Louis, the doctor and responsible adult in the situation, goes to pieces. It is Jud the saves the day on that occasion, a hint of what is to come and what is not to be. While Louis’ ineptitude can be put down to the long, frazzled journey, it is also King foreshadowing what is to come.

What I noticed more starkly on my recent re-reading was just how Louis’ internal monologue gives away more to the reader than it does to Louis himself. When he’s looking at Church after the accident, he says to himself: “It, thought Louis. Not he; it. Remember, it’s been spayed.” Yet Church was spayed before the accident and Louis never referred to him as 'it' before; it is clear to the reader in a way it isn’t clear to Louis that Church is different after the accident, that he’s become an 'it'. Furthermore, in part two, Louis starts to argue with himself internally. Where previously we read only Louis’ thoughts and asides, now it is his thoughts arguing with what - himself or something else entirely that is influencing him? Through brilliant prose, King manages to show us Louis’ tortured spiral into madness in subtle and effective ways.

I could go on with all the beautiful touches that King employs in “Pet Sematary”, and indeed I had a good page of notes when I’d finished it. But to do that would spoil a book that deserves to be enjoyed firsthand, and I hope this review has tempted you to do just that.

I first read this novel as a young, single girl and it affected me then; I re-read it as a mother and found it was just as effective and affecting. I think that’s part of the charm of this book, encapsulated by the opening scene with the car journey. Whether you’re the frazzled father/driver, the tired mother/passenger, or the bored and carsick children in the back, we can all relate to the state in which the Creeds arrive at their new home. This sympathising continues throughout the novel: whatever your concept of death, you’ll find a character to relate to, to weep with, and to be afraid for. And there’s plenty of fear to go around.

Charlotte Bond lives and writes in West Yorkshire. These days she writes mainly horror and dark fantasy, although has been known to dabble in sci-fi, heroic fantasy and even romance. She writes under her own name, as well as ghostwriting for other people.  You can find her online at her website here and on Facebook here.


note - Pet Sematary was also reviewed by Marc Lyth on this link
at 09:00