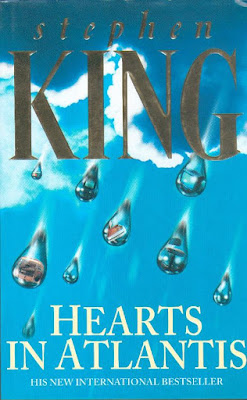 Stephen King has spent half a century strip-mining his life to feed his writing.  Whether in "The Dark Half" where writer Thad Beaumont battles his dark side; or the teacher John Smith in "The Dead Zone"; or the kids in "The Body", looking for a dead boy beside the train tracks (King has talked before of seeing in his youth a friend killed by a train), time and again King has dug into his own life for inspiration.

In "Hearts in Atlantis", King performs the same trick again, essentially fictionalising his life to date for this collection of two novellas and three short stories.  In doing so, King not only opens himself up for examination, but he also examines the changes that occurred in American society over four decades, from the innocence of the 1960s, through the bloody carnage and insanity of Vietnam, to the quiet reflection and even hope at the end of the millennium.

The two opening novellas, Low Men in Yellow Coats and Hearts in Atlantis, form the core of the book and provide the key telling moments.  The opening story takes us back to 1960, where we’re introduced to young Bobby Garfield.  Bobby's father, like King's, has disappeared, leaving his mother, Liz, to raise him.  Into their apartment complex moves a strange older man, Ted Brautigan, to whom Liz takes an immediate dislike.  Ted is a mystery, an obviously educated man very much down on his luck with no past, and, it seems, no future.  Unsurprisingly, Bobby is drawn to Ted, who introduces him to such books as Lord of the Flies, which fires the young boy's imagination.  Coupled with Bobby’s growing relationship with Ted, which King expertly draws, is the relationship Bobby has with his school friends Carol and John.  And as with every King story, the element of the strange and supernatural is introduced, as it is revealed that Ted, with his secret past, is being hunted by low men in yellow coats.

By this stage in his career, King was an expert in evoking the joys and sorrows of childhood.  Bobby spends time with Carol and John during their summer vacation and along the way, learns something about love and friendship and the raw fact that change is coming.  Ted teaches Bobby about adulthood, and the choices that adults, particularly his mother, make in order to survive.  Liz is an easy character to despise; her angry outbursts, her desire to control Bobby through carefully doling out her affection is a way to punish him for his father leaving her, but also to ensure Bobby himself doesn’t go anywhere either.  Of all the characters in Low Men in Yellow Coats, Liz is the most believable, a flawed, broken woman who has had to make choices in life that are necessary for a single mother raising a son to survive.

The main character, Pete Riley, has just started university.  The son of working class parents, he's the first in his family to make it to college, and his education there shields him from the draft and the Vietnam War.  This section spoke most to me, as the experience Pete has of living on campus and the obsession he and his fellow boarders have playing the card game Hearts mirrors the experience I had when I attended, and flunked, my first year at university.

It is worth noting here that King forges the links that bind the disparate parts in the novel in this story.  Pete meets Carol, Bobby's friend from the first story, and forms a brief, but intense relationship.  Some of Pete's fellow students flunk out due to their addiction to Hearts, and appear in a later story, Why We're in Vietnam.  Once again, King expertly evokes the period, skilfully blending the hope of youth with the realisation that darkness lurks all around, particularly in the entangling mess that Vietnam has become for America.  Pete also takes away a lesson that we all eventually learn – that despite our youthful idealism, in the end, people simply fail to be as good as they hope to be.

The latter three stories deal with the aftershocks of Vietnam.  Not only does the book hold up a distorted mirror onto King's life, but it also goes some way to paralleling the American experience in Vietnam.  The youthful characters in the first part of the book soon experience anger, despair and the effects of violence, and only after years of painful rejection do they come to terms with their lives.  We learn that Carol drops out of university and becomes involved in violent anti-war efforts, eventually disappearing, presumed dead, in a hail of gunfire with police and a resulting fire.  John Sullivan, Bobby’s friend, goes to Vietnam and becomes involved in a terrible war crime that he is, literally and figuratively, haunted by for the rest of his life.  A tangential character, Willy Shearmen, features in a latter story in the book, Blind Willy.  Shearmen exacts a daily punishment on himself for the atrocity he committed with John and the others in his platoon, by begging and donating his takings to churches around the city.

The last story, Heavenly Shades of Night are Falling, brings us back full circle.  It’s 1999 and Bobby has returned to his old hometown to say farewell John Sullivan at his funeral.  It’s here that King offers up the central tenet of the book.  Bobby ponders:  After awhile, you wanted to say to God, Ah, come on, Big Boy, quit it.  You lost your innocence when you grew up, all right, everyone knew that, but did you have to lose your hope, as well?

Many have argued that it was during the 1960s that America lost its innocence.  The murder of JFK and Martin Luther King, race riots and burning cities, the squalid, bloody adventure in Vietnam.  That’s all nonsense, of course.  But Bobby’s last question, about having to lose your hope as well, is answered by King in this last section.  Hope lives with us forever, no matter how changed it might be by what life has thrown at us.  Hope is like Carol, scarred and living as a fugitive, who comes back to Bobby in the final pages.  Hope lives with us while everything around us is changing and changing and changing.

It was while I was re-reading the NEL paperback edition from 1999 that I noticed something about the front cover that gave me pause.  The streetscape, with clouds and lighting in the background, has a piece of paper with the word LOST floating down the drenched street.  The word LOST is above the title - HEARTS IN ATLANTIS.

In many ways, Atlantis is America, and the lost Hearts are the characters in the book, trying to find themselves, and each other, in a world that is rapidly sinking around them.  In the end, only a few make it to shore.  And what a tale they have to tell.

Robert Mammone lives in Melbourne, Australia. He has fond memories of being terrified as a boy watching the tv adapation of Salem's Lot, and then went back for more when he read the book a few years later.  He's been published in Doctor Who Magazine, by the British Fantasy Society, and had short stories in Darker Minds, Darkest Minds, Ill at Ease 2 and Midnight Echo.  When he's not writing or wrangling the triffids in the backyard, he's doting on his family.

You can catch him on twitter @dread_sinister or if you want to gaze into the abyss, check out his blog here https://robertmammone.wordpress.com/
at 09:00

Email ThisBlogThis!Share to TwitterShare to FacebookShare to Pinterest
Labels: Hearts In Atlantis