The Drawing Of The Three, reviewed by Julie Cohen 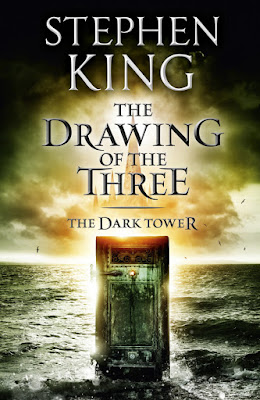 I read The Gunslinger, the first book in the Dark Tower series because I’d read everything else that Stephen King had written. A fellow King fan, a bookseller, pressed a copy into my hand when he found out I’d never read any of the series. So I went home and read it and I hated it. It was boring. It was dreamlike and episodic, without much logical plot structure. The hero, Roland, didn’t feel human. It was misogynistic. And having recently finished 11.22.63, which I thought was one of King’s most terrific books yet, with a great plot, rounded characters, and a female love interest who had a life of her own, I was surprised and dismayed. ‘He’s got much better since he wrote this,’ I thought, and I put it down. I knew that King thought that the Dark Tower series was his masterpiece…but I couldn’t work out why.

Then I read The Drawing of the Three. It was published nearly ten years after the original Gunslinger stories, and boy, can you tell.

The beginning of this novel is a masterclass for any writer on how to begin a novel. Our hero, Roland, is lying unconscious on the beach after the events of the previous novel. When he wakes up, he’s alarmed to find that his guns and his shells have got wet. For a gunslinger who lives by his pistols, in a world where ammunition is rare, this is a potentially lethal disaster.

So he doesn’t pay much attention to the four-foot lobsterlike creature who has washed up on the sand not far from him. He’s much more worried about his ammunition. But then, on page three, the lobster bites two of Roland’s fingers off.

Page three. Our gunslinger hero has his trigger finger bitten off. He can no longer hold a gun.

That’s a conflict. That’s how to start a novel.

By page twenty-seven, Roland is close to death, and the only thing that can save him is a door into another world—our world. And the only person who can help him is Eddie Dean, a junkie who’s on a plane from Nassau with two pounds of cocaine strapped under his armpits. The stakes are breathtakingly high.

And bringing Roland into Eddie’s world, and Eddie into Roland’s, is a stroke of genius. It lets us see Roland from another perspective, and we start to appreciate how extraordinary he really is. And Roland gives us a perspective on our own world, too. There’s a moment where Roland tastes Pepsi and he’s flabbergasted by the extravagance of it: in his world, this much sugar would be more valuable than gold.

The Drawing of the Three gallops along at a wonderful pace and it completely hooked me into The Dark Tower series. I meant to read them slowly, in between reading other things, but I came down with pneumonia when I was reading Wolves of the Calla. Whilst I was in hospital, I hallucinated werewolves and vampires coming to get me.  After that, I had to stick to the more pleasant worlds of Harry Potter and Georgette Heyer and Alexander McCall Smith for a little while. But after I was well enough not to be on the serious drugs any more, I picked up The Dark Tower series again, and I ate it whole. I sat in the sunshine, under a throw, following Roland to the Dark Tower, and by the end I was nearly well again.

The best books take you on a journey, and although I find The Dark Tower series to be an uneven journey, I’m glad I made it. If you’re a King fan, it’s vital. But I never would have got beyond the first step if not for The Drawing of the Three, and those spectacular opening pages.

Julie Cohen is from Maine, where children are fed Stephen King novels as soon as they are weaned from the breast. She’s written twenty-two novels of her own; DEAR THING was a Richard and Judy Summer 2014 Book Club pick, and her current novel WHERE LOVE LIES was shortlisted for the Romantic Novelists’ Association Award. She teaches creative writing, is the resident agony aunt for Novelicious.com, and spends a great deal of time on Twitter pretending to be a Lego cannibal.

Email ThisBlogThis!Share to TwitterShare to FacebookShare to Pinterest
Labels: The Drawing Of The Three