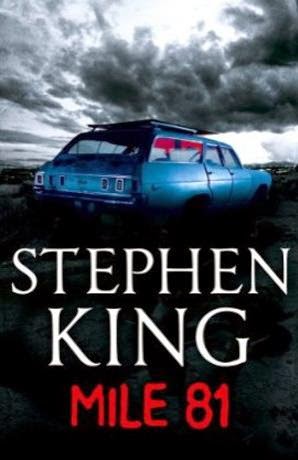 Most of the posts on the King for a Year project cover individual books, but there are handful of standalone novellas that, as of this writing, have yet to be collected.

Today I'll be taking a look at three of these shorter works, each dealing with one of King's primary obsessions--seemingly innocuous objects, baseball and motor vehicles--with varying results.

'Ur' (2009)
Some of my favourite King stories are those where everyday objects turn out to be possessed, cursed, or some other manner of abomination. Whether it's the haunted camera of 'The Sun Dog', the novelty gnashers of 'Chattery Teeth' or the reality-warping 'Word Processor of the Gods', King has a knack for making the mundane terrifying.

It was only a matter of time before he turned his attention to that boon for the modern reader, the Amazon Kindle.

An English professor purchases his first e-reader, following a spat with his tech-savvy girlfriend. He soon discovers that the device is also linked to another world--a world where Hemingway lived another couple of years and released a novel called Cortland's Dog. It's an academic's dream, and it doesn't stop there. Among the plethora of dimensions that can be reached by the Kindle (some ten million and counting) there seems to be an infinity of new works by the cream of American authors.
This being a King novella, you know it's not going to end there and, as he unlocks the rest of the Kindle's features, he is drawn into a web of predictions, predestination and paradoxes that he must do everything in his power to undo.

The story is a fine one. Of particular note is the way that King fluctuates both the nature and the scale of the threat. It starts off abstract, with the unwritten books, then expands to global proportions as he tries out the device's other features, before shrinking back to strictly personal concerns, with a nice bit of multi-dimensional peril thrown in for good measure.

Whilst the central conceit is a good one and well-realised, it is this ripple effect that makes the story stand out for me. An excellent piece about a gadget that all readers now take for granted.

'Blockade Billy' (2010)
As a Brit (and a non-sports watching Brit, at that) I've never followed baseball, so I can't comment on how effectively King portrays the technicalities. Not that it matters--as with much of King's work, this isn't a story about baseball, any more than 'Salem's Lot is a story about vampires, or Cujo is a story about a rabid dog. It is a story about people, and there just happens to be a whole load of baseball going on in the background.

It is the story of a Major League Baseball team who hire a minor league player--the eponymous Blockade Billy--as a last minute replacement catcher. He's a rather slow-witted young man, but a phenomenal player who quickly endears himself to both the team and the fans.

It is a taut an mesmerising crime drama, as Billy's dark and mysterious past becomes unravelled, leading to an excellent final reveal, which I won't spoil here. It owes a lot to The Green Mile in its feel, if not its execution (small pun intended).

On its own, there is enough to recommend 'Blockade Billy' to any King fan, but you also get another story as a bonus.

'Morality' is even better than the lead tale. It concerns a woman who is offered a Hell of a lot of money to commit a mortal sin on behalf of her employer, who is too enfeebled by age and ill-health to do so himself. The sin that she commits, whilst minor stuff in the grand scheme of things, still comes across as shocking on the printed page.

It is not the act that concerns us, though, but her behaviour that follows--her paranoia, her hubris and the general decline of her mental health are all described in pitiless detail.

Two excellent tales, without so much as a whiff of the macabre between them, and well worth your consideration.

'Mile 81' (2011)
Just what is it with Stephen King and killer cars? Whether it's Christine, From a Buick 8, or the lamentable Maximum Overdrive (one of the best soundtracks of all time, saddled with one of the worst films), he seems to have an inherent distrust of the internal combustion engine. Of course, given his well-documented encounter with his own four-wheeled harbinger of death, he may be onto something.

Compared with 'Ur' and 'Blockade Billy', this is a straightforward piece of business. A mud-covered station wagon pulls into an abandoned rest area, its driver's door opening up, an enticing bit of bait for any passing Good Samaritan. A fair number of them show up, the stupid bastards--don't they know who's writing this story?

A tragedy of errors follows as victim after victim gets lured by the car, and each gets dispatched in short order... and that's about it. A simple premise, well told, but I was expecting so much more. It's short and punchy, with no let down in the action, just one character after another getting their patented Stephen King back story before meeting their demise.

What really bugs me is a narrative device that I have grown to loathe over the years. As each victim reaches the rest area, King drops in a line to the effect of: “it would be the last mistake of his life” or “she stepped out of the car for the last time”. It's a cheap hook, utilised ad nauseum, and we know King is better than this.

'Mile 81' is a popcorn story--enjoyable enough in its way, but nothing you're going to recall with any great fondness.


Of the three novellas, 'Blockade Billy' is the best written, whilst 'Ur' has the more engaging story: both are worthwhile additions to your collection. 'Mile 81' is only for completists, as there has little to grip the casual reader.

He has already contributed to the King For A Year project with his review of "Danse Macabre"
at 09:00

Email ThisBlogThis!Share to TwitterShare to FacebookShare to Pinterest
Labels: Blockade Billy, Mile 81, Ur