The Girl Who Loved Tom Gordon, reviewed by Alison Littlewood 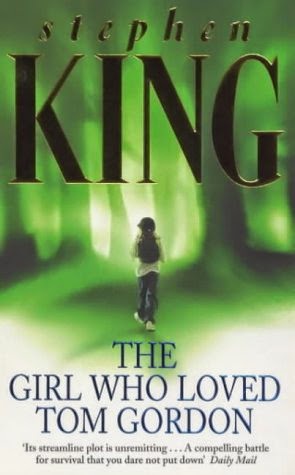 For a long time this has been my favourite Stephen King novel, without really knowing why (it certainly isn’t, as someone once joked, because it’s one of the shortest). I’m not sure how old I was when I first read it, though it must have been about fifteen years ago. When I came to re-read it for this blog, it struck me that it’s probably because The Girl Who Loved Tom Gordon is essentially Stephen King’s take on a fairy tale.

I’ve adored fairy tales since I was a small child, and they still fascinate me. Trisha, leaving the path and wandering into the forest, is a modern day Little Red Riding Hood, one whose memories of sitting on the bleachers and watching baseball are yet so redolent of King’s work. How could I not love it?

Little Red Riding Hood has been given many interpretations over the years. In early versions, Little Red escapes the wolf using her own wiles (ironically, using a toilet trip – the very thing that gets Trisha into trouble.) Later it was turned into a morality tale, with a rather feckless child being punished for breaking her mother’s rules about leaving the path. And what a punishment it is: to be eaten alive by a wolf.

Trisha, however, is no feckless child but a sharp little cookie. In many ways she’s the adult of the piece, possessing more maturity than her mother and older brother. Though only nine years old, she tries to hold the bickering family together. She doesn’t transgress: she is simply ignored. There is a hole where parental responsibility should be, and Trisha falls into it. And what she finds in the woods isn’t a punishment. It’s there because – well, because there are bloody scary things loose in the woods, not least the spectre of her own fear.

But Trisha has inner resources. She can transform the world using the power of her imagination (beautifully foreshadowed in the way she tunes out her family with daydreams of her favourite sports star, the eponymous Tom Gordon). And she clings to the thought of him and those innocent days eating hot dogs and watching the Red Sox romp home. The contrast of that imagery with the primal world around her, with its bugs and snakes and death and the endless trees, makes her situation more frightening. King reinforces the physicality of the surroundings with his use of metaphor. A stump of branch is as ‘thick as an amputated forearm’. A snake ‘pulsed under her palm like a cold muscle’. And then comes that terrible realisation that, when the trappings of civilisation are stripped away, we are nothing but food.

It always astounds me about King that he can write a novel with only a single character in it for most of the way through and yet it’s still entirely gripping. We’re in that character’s inner world, seeing what she sees and feeling what she feels. He makes us care, has us rooting for her, and then he throws her even deeper into the mire.

To return to the fairy tale, The Girl Who has its own big bad wolf, in the form of the God of the Lost. But King’s version is more than sharp teeth. The God is Trisha’s fear personified. It also represents the forces of nature, the wilderness; the silence. It is something bigger than ourselves, beyond our understanding. It is the essential ‘other’ that is being pitched against the resources of a nine year old child, and as such it inspires awe as well as fear.

That sense of wonder, I think, is why I loved fairy tales in the first place, and perhaps has a lot to do with why I love this book. There’s a little piece of magic somewhere in the world, if it can only be found. Of course, here, magic takes on a vast and terrifying form. All we can do in the face of it is huddle a little closer to the fire and tell ourselves stories to keep the darkness at bay, much as those early tellers of fairy tales may have done. Of course, we can also stick to the path: ‘When you were on the path your Red Sox shirt stayed clean and dry . . . On the path you were safe.’

Alison Littlewood is the author of A Cold Season, published by Jo Fletcher Books, an imprint of Quercus. The novel was selected for the Richard and Judy Book Club, where it was described as “perfect reading for a dark winter’s night.” Her second novel, Path of Needles, is a dark blend of fairy tales and crime fiction, and her third, The Unquiet House, is a ghost story set in the Yorkshire countryside. Alison’s short stories have been picked for The Best Horror of the Year and The Mammoth Book of Best New Horror anthologies, as well as The Best British Fantasy 2013 and The Mammoth Book of Best British Crime 10. Alison lives in Yorkshire with her partner Fergus, in a house of creaking doors and crooked walls.

Visit her at www.alisonlittlewood.co.uk
at 09:00

Email ThisBlogThis!Share to TwitterShare to FacebookShare to Pinterest
Labels: The Girl Who Loved Tom Gordon