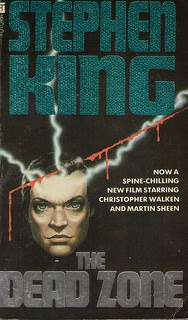 At its heart, The Dead Zone isn't a horror novel at all. It's a love story, a bitter-sweet tale of a love that might have been. Johnny's relationship with Sarah runs through the middle of the story, the glue that holds Johnny together when everything else seems bleak and hopeless.

I think everybody knows the plot - Johnny wakes from a long coma with the ability to see the future - and what he sees is bleak - unless a single man can be taken out of the equation early. The moral implications, the 'would you go back and kill Hitler if you could' argument drives the story along.

Several themes that would recur in later King novels turn up here - the roads not traveled, a good man trying to do the right thing against seemingly impossible odds, and the corruption of the soul that comes with power. But it is Johnny, the broken man, that gets our whole attention. He's a fully realised individual, one of King's great strengths, and we feel his pain and confusion, firstly after the accident, and then, with increasing hopelessness and horror as his 'gift' demands its price.

I first read this on its initial publication, more than 35 years ago now, and I wasn't sure about going back to it. I was worried that my feelings for it might have been colored by repeat viewings of the Cronenberg movie, and also by the somewhat lacklustre TV series from a few years back. I needn't have worried. As ever, King pulled me in, and I got through it in two sittings with just a coffee break in the middle.

I believe I enjoy it more now than I did then - back in '79 I was only a lad of 21 and I didn't really identify with Johnny's lost years, lost love or fear for the future. An older, more cynical me saw much more of myself in Johnny than I did then, and I do believe it's risen up the ranks in my list of favorite King novels to somewhere near the top five.

Stilton is a great, slimy, villain in counterpoint to Johnny's inate goodness, Sarah is as sweet as I remembered her, Johnny's sacrifices tugged at the heartstrings, and the grace note at the end at the graveside did something it hadn't managed before - this old cynical fart had a wee tear in his eye as he put the book down.

Five out of five stars, and I definitely won't wait another 35 years before reading it again.

-----
William Meikle is a Scottish writer, now living in Canada, with twenty novels published in the genre press and over 300 short story credits in thirteen countries. He has books available from a variety of publishers including Dark Regions Press, DarkFuse and Dark Renaissance, and his work has appeared in a number of professional anthologies and magazines. He lives in Newfoundland with whales, bald eagles and icebergs for company. When he's not writing he drinks beer, plays guitar, and dreams of fortune and glory.

You can find him online at www.williammeikle.com and on Twitter at @williemeikle
at 09:00

Email ThisBlogThis!Share to TwitterShare to FacebookShare to Pinterest
Labels: The Dead Zone