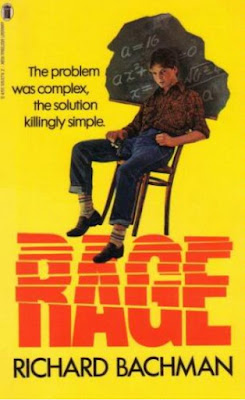 "I sat in the row farthest from the door, which is next to the windows, and I spotted a squirrel on the lawn. The lawn of Placerville High School is a very good one. It does not fuck around. It comes right up to the building and says howdy."  - Rage

We must begin by talking about the elephant in the room.

Although I knew it had happened, I was still shocked when I picked up the latest printing of "The Bachman Books" and realised that "Rage" was no longer a part of it.

Stephen King now shares a dubious honour with Stanley Kubrick – that of pulling a work during their lifetime. For Kubrick, it began when "A Clockwork Orange" was given an ‘X’ rating in the US and he chose to screen the film in only one cinema in the UK for 13 months. He did this thinking that any controversy would have died down after such a lengthy period of time. However, the film was a sell-out, the cinema was full every single day of those thirteen months and when the film was finally released nationwide, organisations such as the Christian ‘Festival of Light’ who had been biding their time, pounced. The film was then banned in 10-15 local authorities, reports emerged that people who were watching the film were carrying out copy-cat attacks against homeless people, also participating in rapes and woundings whilst dressed as ‘droogs’.

Kubrick was then asked by Warner’s if he would consider a world-wide re-release. Kubrick agreed, but with only one caveat – it would never be re-issued in Britain, a ban that held fast until after Kubrick’s death in 1999.

Originally titled as ‘Getting it On’ and the first book to be published under the Richard Bachman moniker in 1977, "Rage" was written when Stephen King himself was a student in high school in 1965.

The book concerns a certain Charlie Decker, a young boy who’s ‘coming of rage’ sees him bring a gun into school. There is an involved back story about the relationship he has with his dominant and domineering father – and a battle with one of the hostages; although Charlie has the gun, it is Ted, the ‘jock’, who lets Charlie know that he has nothing – but at its heart is a story about a young boy with a mental illness. And we, the reader, have been invited to spend some time to see this mental illness manifest and how he’s wound up the way he has.

"Rage" is a novel that was published and sunk quickly.

After the game was up and Richard Bachman was exposed as Stephen King, all of the novels/novellas written under the Bachman byline were published in 1985 as "The Bachman Books".
To date, the following incidents have been attributed to "Rage".

• April 26, 1988 - Jeffrey Lynne Cox stormed his high school humanities class at San Gabriel High School with a semiautomatic rifle. He took 60 classmates hostage.  His demands were one million dollars. His hostages wrestled the gun from his hands." He told police afterwards: "I didn't do it for love or money or sex or drugs or rock 'n' roll, I had a message I wanted to get across . . . of unmasking people, of disrobing the images everyone puts on, of making people real. I still think I had the right idea. But that was the wrong way of doing it. It was very foolish." There were no casualties.

• September 18, 1989 - Dustin Pierce, 17, took eleven classmates hostage at Jackson County High School, McKee, Kentucky. A copy of "Rage" was found in his locker. Pierce was armed with a shotgun, a revolver and an automatic pistol. There were no casualties.

• February 2, 1996 - Barry Dale Loukaitis, 14, walked into his algebra class at Frontier Middle School, Moses Lake, Kentucky dressed as a gunslinger. He was armed with a hunting rifle and two handguns. He shot and killed his Algebra teacher, Leona Caires and two students, Arnold Fritz and Manuel Vera, both 14. Another student, 13 year old Natalie Hintz was shot in the right arm and abdomen. She told CBS in 2000: "I was shot in the back, 170-grain bullet, 30/30 rifle, from 12 feet away [it] blew my liver, my diaphram, my arm off."

King himself explains in his 2013 essay "Guns": “I pulled it with real regret […] the violent actions and emotions portrayed in "Rage" were drawn directly from the high school life I was living five days a week, nine months of the year. The book told unpleasant truths, and anyone who doesn’t feel a qualm of regret at throwing a blanket over the truth is an asshole with no conscience.”

Reading the book again for only the second time in 20 years, I was still surprised at how quickly the book takes hold of you. It’s well written, Charlie Decker, as narrator comes across as broken but affable, and this is part of what makes King the author he is; his depiction of the everyman is wholly believable, even the ones in his more far-out horror/supernatural novels such as "Pet Sematary" (the character Louis Creed is crafted in such a perfect way that you can see bleak justification in why he did the things he did). Reading "Rage" you know Charlie is a monster, but you want him to get through it, you don’t want him to die and this is because King dares you to like him and by the end, you do.

This could be because I first read "The Bachman" Books at 16 years old, stolen from John Menzies by a friend and I read that book over and over again. I didn’t read the others till much later. The book spoke to me; I was horrendously bullied through high school and here was someone going through the same kind of pain that I was. Here was someone saying that being a teenager was fucked up, from the adults expectations of you, to the utter carnage of being able to deal and live amongst your peers who all thought they were better/prettier/sportier/funnier than you. However the concept of taking guns to school and mowing people down never once entered my mind – and my family was one where guns were easily got to, my father was, after all, a gamekeeper, and he kept high velocity rifles and shotguns in the home. And that’s the thing – it’s about your moral centre, no matter how badly damaged you are, the answer is never about damaging others. And while I may have thought about harming my bullies, I never carried it through, I beat them in other ways.

I’d like to finish off on a final thought, that of another school-set book, "Carrie". Another abused child who gets bullied, and wreaks revenge by killing her peers at school. That book remains in print because it’s all too fantastical. "Rage" no longer remains in print because its premise is now sadly all too real. And I think King is right in withdrawing the book, however if someone wants to find it, they will. Words have power for those who want to twist them to fit their own agenda.

The rest of "The Bachman Books" will be written about, one by one.

Johnny Mains is an editor and author. His latest collection, A LITTLE LIGHT SCREAMING, is out now.
at 09:00

Email ThisBlogThis!Share to TwitterShare to FacebookShare to Pinterest
Labels: Rage