Three more novellas ("A Face In The Crowd", "Throttle" and "In The Tall Grass"), reviewed by Kevin Bufton 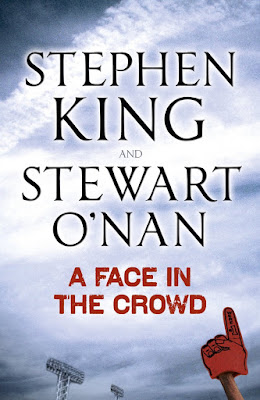 In my last round-up of King's shorter works (which can be found here), I looked at three novellas that centred on his favourite narrative obsessions. Today's column has its own theme, as all three works have been written in collaboration with another author.

As any writer can tell you, working with someone else can be a joy or a nightmare--often at the same time. Whilst I can boast no insight into the creative processes employed, I imagine that co-writing a book with the world's most famous exponent of horror would be a daunting prospect for anyone, even more so when he happens to be your dad.

It details the humdrum life of a retiree, whiling away his remaining years watching baseball on the television. As the season progresses, he starts to notice people in the stands; people he's known over the years, people he knows shouldn't be at a baseball game, people who aren't even this side of the grave.

It is one of those blendings of reality and the supernatural that King does so well, and O'Nan's involvement does not water the effect down. We, as readers, are left to consider whether the visions are the product of something unearthly, or the more prosaic (but no less terrifying) result of the deterioration of the protagonist's mental faculties.

The writers nearly fluff that, right at the end, but there is sufficient ambiguity in the reveal to keep us guessing, which is all I ask.

A poignant and heart-wrenching piece, I'm not too proud to admit that it brought a tear to this jaded old reader's eye.

'Throttle' [w/ Joe Hill] (2009)
This is King's first collaboration with his son, Joe Hill, an excellent wordsmith in his own right. It was originally included in He Is Legend, a tribute to Richard Matheson, and is an homage to the classic Matheson story 'Duel', famously adapted into a television movie. 'Throttle' was also released as an audiobook, alongside Matheson's original story.

That's part of the problem.

Knowing that it pays tribute to 'Duel', the novella shows its hand early and often and, if you've seen the movie, there are few surprises for you here. Certainly it has been updated for the new millennium--the protagonists are a biker gang involved in various dodgy dealings, which gives it a pleasing Breaking Bad/Sons of Anarchy vibe.

Much like the original, the bikers are pursued by a truck that has them trapped on a mountain road, with no way to avoid its onslaught. As one gang member after another is picked off, the tension is almost palpable. The pacing of the story is excellent; as the truck closes the distance between itself and the bikers, sentences become shorter and tighter, building up a sense of real urgency.

Where it fails is in how it humanises the truck and its driver. It's been a while since I've seen the movie, I'll admit, but I recall the truck being this imposing, implacable metal beast, pursuing its victim without rhyme or reason. Indeed, King himself describes it as such when discussing the movie in his novel-length essay, Danse Macabre (reviewed with revelatory panache on this very site by some hack or other).

King and Hill evoke a similar feeling over the first two-thirds of the book with some success, before giving the truck driver a damn good reason for chasing the bikers. I won't spoil it here, but it ruined the rest of the book for me. There's no downturn in quality, but once we stop seeing the truck as a beast and start seeing it as a tool, wielded by an average, flawed human being, the story loses a lot of its impact.

Without fear of hyperbole, 'In the Tall Grass' is one of the best books I've read in years. It is classic King, and shows just how much the father has influenced the son.

A brother and his pregnant sister are travelling across the country, when they hear a child's cry for help issuing from a field of grass on the side of the road. They stop the car, pull over at the side of the road and try to effect a rescue, plunging into the field to locate the kid.

Soon, they become as lost as the little boy, the grass somehow keeping them from finding each other, or their way back to the road. King and Hill craft a disorienting experience both for the characters and the reader, as the siblings stumble deeper and deeper into the whispering, rustling grass.

The overall tone is one of creepy, rather than horrific; a terrible, crawling dread as they call out to one another, their voices becoming as distant as the highway, despite their best efforts to find a way back to each other and safety.

That's not to say that the writers shy away from more horrific elements--it's Stephen King and Joe Hill, for God's sake. The fate of the sister, in particular, is especially sickening, and not easily forgotten. Both approaches work well in the context of the story, and the crunch of teeth on bone is as effective as the susurration of the wind through the grass, albeit for different reasons.

A vast improvement, and one guaranteed to give you chills.


And thus we end another round-up.

'In the Tall Grass' is the clear favourite this time, though 'A Face in the Crowd' comes a close second.
'Throttle' is by no means a bad story but, for this writer's money, it pales in comparison with its illustrious forebear.

In addition to the already mentioned novellas, he has previously contributed to the King For A Year project with "Danse Macabre"
at 09:00

Email ThisBlogThis!Share to TwitterShare to FacebookShare to Pinterest
Labels: A Face In The Crowd, In The Tall Grass, Throttle