The Dark Half, reviewed by Andrew Murray 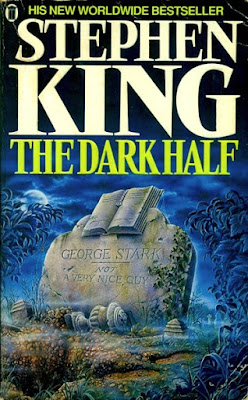 Between 1977 and 1984, Stephen King published five novels under the pseudonym of Richard Bachman and these tightly written books were bleaker and more pessimistic than his overly supernatural ones under his own name. “Rage”, “The Long Walk”, “Roadwork”, “The Running Man” and “Thinner” are very well written of course, and it was “Thinner” which blew the Bachman cover as it’s very recognisable as a King supernatural horror novel and also has a different tone to the previous ones.

King probably wasn't too happy with his Bachman name getting revealed, and he maybe responded with “The Dark Half” in 1989. In this superb and gruesome tale, Thad Beaumont writes books that get good reviews, but weak sales. Despite a nomination for a National Book Award, he gets writers block and has to write something fast. He creates the name George Stark and quickly churns out violent, pulp crime novels about a killer called Alexis Machine that are a big hit with the public and life seems good for awhile. But when his cover is threatened to be blown, he holds a mock funeral and features in a story for People magazine, complete with fake tombstones that read George Stark 1975-1987 Not A Very Nice Guy.

So when the local gravedigger finds a huge hole and fresh marks leading out of the mock grave, things get weird and very gruesome fast. The murders are some of Kings nastiest and he doesn’t look away at the aftermath of Starks handiwork. The guy who tried to blackmail Thad in the first place meets a horrific end that jolts the reader with its brutality.

Thad’s fingerprints are all over the murder scenes but he has an iron-clad alibi that clearly puts him hundreds of miles away at the time and the investigating sheriff doesn't know what to make of it all either. Then Thad starts getting threatening calls from George Stark, who tells him they need to write another book to keep George alive. Write the book or Thad’s family is killed.

Stark is one of Kings best and creepiest creations. Slicing his way through people he believes are responsible for his death in the first place, his cold determination to get to Thad and force him to keep him alive is chilling and well paced. He is deteriorating rapidly and is soon stinking of rancid meat and covered in bloodied bandages. “You're dead George, you just don’t have the sense to lie down,” Thad tells him at one point.

Throughout the book, the ominious phrase "The sparrows are flying again" is written at the murder sites, yet George doesn’t seem to know what it means. As he and Thad are holed up writing, sparrows gather outside the house. They are psychopomps who deliver souls to the land of the dead & they have come for him whether he likes it or not.

The strange bond between Thad & George is partially explained in the prologue where a young Thad has brain surgery and its discovered an unborn twin has been absorbed in utero by him. But there’s more to George than that. Part of Thad liked the guy when he was a pen name and nothing else - tough and manly, not clumsy like Thad was.

Douglas Winter said “The Dark Half” was a riff on the Frankenstein theme. Thad created Stark but is horrified at the creation that he can’t control after its come to life.

I still think this book is one of Kings best. It's compelling, grisly, has great pace and more than its share of horrors. It was also turned into a damn good film as well by George Romero.  “The Dark Half” has some echoes with both “Misery” and “Secret Window” in exploring the darker side of fiction writing, but it’s its own novel in itself. An excellent book that deserves re-reading.

Andrew Murray lives in Adelaide South Australia and has been a fan of Stephen King since reading “Cujo” in high school. He hopes to publish some fiction of his own, but despite a few close calls has yet to crack the market. Perhaps a pen name would help....
at 09:00

Email ThisBlogThis!Share to TwitterShare to FacebookShare to Pinterest
Labels: The Dark Half