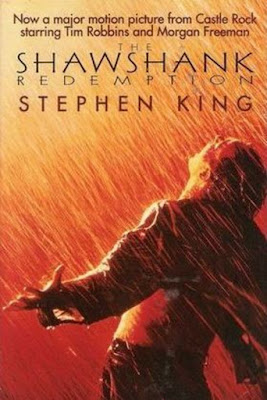 Until I picked up the "Different Seasons" collection a few years ago, I had not read a single book by Stephen King since the early 1990s. Back then, I went through a phase in which I read five sequential King novels, the first three "Dark Tower" books, "The Tommyknockers", and "The Eyes of the Dragon". I had a friend from my MFA writing point out to me how I read the weird, offbeat books by King. I was never one to follow trends while all my friends were reading "It" and "The Stand" back then.

Thing is, I loved King’s style of storytelling, and looking back, I realize now the influence it had on my own writing voice considering I first started my creative writing endeavor in 1989. Thinking about it, I don’t know why I ever stopped reading his works. I’ve been changing that, having read "On Writing" and a short story that was published in the New Yorker recently. My mother is passing on her King collection to me, consisting of all his early stuff, so I’ll have plenty to catch up on.

"Rita Hayworth and Shawshank Redemption" has resonated with a part of me that has lay dormant for several years. The novella reminded me of everything I loved about Stephen King’s stories, like his ability to pull me right in with the first paragraphs. I had no idea what Shawshank was about before reading the first page, other than it involved a prison. Up until the first time I read this I had not seen the movie either, as I do not watch movies that often – it’s a time thing.

I understand why this novella attracted the attention of filmmakers: it is a story about hope, survival, and the obvious redemption. Readers get to know the narrator so intimately and empathetically, yet he isn’t exactly a good guy, and the story spans a considerable portion of the twentieth century. It’s filled with characters that are easy to comprehend – incarcerated criminals and corrupt prison guards – living on the darker side of humanity, creating a dynamic which we abhor in real life yet follow vigorously in movies, TV shows, and books. The protagonist, Red, who narrates the story, had fixed the brakes of his wife’s car causing her death as well as two others including a baby. It’s hard to develop compassion for anyone who has committed such a heinous crime, yet, King makes it happen.

Time was a significant character in this story. I found compelling King’s ability to step back and forth through time in its forty-year span. He was able to seamlessly move from a memory of an event to actually putting the reader right there in that moment as the action took place, only to return to the narrator’s current place in the story’s timeline as that episode concluded. He handled representation of the different decades by Andy Dufresne’s posters featuring celebrities like Rita Hayworth, Marilyn Monroe, and Linda Ronstadt as time passed. Other subtle details, such as the rising cost of a rock hammer after nineteen years, provided a contrasting sense of the outside world progressing while prison time was largely stagnant. Red’s reaction to the outside world in 1977 was perhaps the largest example of contrasting times. He was overwhelmed by the volume of cars on the road and noted the spendthrift nature that had yielded so much waste littered on the ground since he was locked up in 1938.

King skillfully used the essay-writing element of double portrait in Red’s story of Andy, an innocent man wrongly convicted of, and incarcerated for, his wife’s murder. “You were writing about Andy Dufresne. You’re nothing but a minor character in your own story,” Red contemplated hearing from an imagined audience in his narration. “It’s all about me, every damned word of it. Andy was the part of me they could never lock up, the part of me that will rejoice when the gates finally open for me and I walk out … I guess it’s just Andy had more of that part than me, and used it better.” Red lived vicariously through Andy following his absence from the prison by recounting his story with a bittersweet sadness. He was happy to see Andy free but missed his friendship.

As stated earlier, this was also a story of survival, each protagonist developing and relying on his skills. Red began the story with the self-introduction, “I’m the guy who can get it for you … within reason.” As the reader learns, Red has a network in place to obtain items from the outside world, generally non-lethal, and distributing them within the prison unnoticed. Placing him in a position of power among the prison population, other inmates respect and do not cause him any problems for fear of losing his resourcefulness. Andy, who was a banker in his past life, uses his financial skills as a means to buy the wardens’ and prison guards’ protection, as well as the development of the prison library he took control of. In building up the library, he earned respect from the other inmates interested in educating themselves or reading for their own pleasure. Andy, like Red, used his proficiencies to make himself untouchable, and a model prisoner, which enabled him to make his escape.

The ending of the story was moving; it was what I wanted to see happen. I loved that the story contained a false ending and then continued, this excerpt made me smile: “I thought I had put finish to my story in a Shawshank prison cell on a bleak January day in 1976. Now it’s May of 1977 and I am sitting in a small, cheap room at the Brewster Hotel in Portland, adding to it.” The blank post card from the Texas border town and the letter with $1,000 hidden in the stone wall Andy Dufresne told Red about was exactly what I wanted to see happen. I was rooting for Red to have a new life, to see him redeemed for his honest nature and good intentions, despite the reason he was locked up in 1938. And I was rooting for Andy, the incarcerated innocent man, to make his escape through the hole he formed behind the series of posters starting with Rita Hayworth over a period of twenty-seven years.

If you haven’t read Rita Hayworth and the Shawshank Redemption, by all means do so. It’s about 100 pages long and immersive. Most people have seen the movie based on it, which stayed true to the story, though it deviated at times. I liked the movie a lot, but I loved the novella.

Fascinated by all things dark, gritty, and dystopian, D.T. Griffith is a recent entry into the horror and dark fiction genres. He has worked as a professional designer, illustrator, and writer since the mid-1990s in the marketing, branding, and communication fields. Like all of his other art, his fiction draws inspiration from classic and modern works alike, spanning a full range of literary masters, surrealist painters, raw comedians, and punk rock.

D.T. Griffith is educated in fine arts and professional writing holding BFA and MFA degrees. He lives in his home state of Connecticut, USA, where he and his wife are raising a creatively and scientifically talented teenaged daughter.