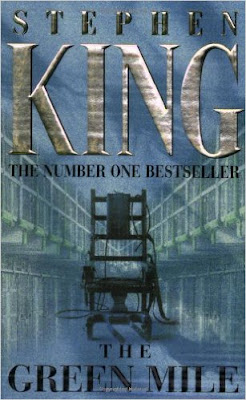 I’ve got to make an admission: up until I graduated from University in 1996, the only Stephen King novel I’d read was "‘Salem’s Lot". Don’t get me wrong, I’d thought it was great, but at the time I was mostly reading pulpy British horror writers: Herbert, Hutson, Guy N. Smith. Later on I became snobby and decided all horror fiction was crap, but when I had to go back into the real world, I realised that the kind of fiction I was trying to write would fall into that category, so it was maybe time to read more widely in it. The first King book I bought was "Skeleton Crew", and after that I devoured pretty much everything he wrote.

So when "The Green Mile" came out – in those little individual booklets, one a month – I bought and read it voraciously. I loved it, of course: back then, I’d decided King was the greatest writer who’d ever lived. I even wrote a serial of my own, for a small press magazine, and convinced myself it was as good as King, if not better. (It was neither.)

But not everyone liked "The Green Mile"; Christopher Fowler, I remember, dismissed it as a book ‘so childish you could colour it in.’ It’d been nearly twenty years (Jesus!) since I’d read King’s serial thriller: how would it measure up?

The answer is, on the whole, pretty damned well. Apart from one thing. But I’ll come to that.

In technical terms, King is at the top of his form. Each new episode builds the recap of ‘the story so far’ into the narrative itself, and as ever, King is a master storyteller. By which I mean, he tells the story superbly; you can almost hear the voice of Paul Edgecombe, former chief guard on the ‘Green Mile’ (the Death Row at Cold Mountain Penitentiary), in your ear as you read.

Paul is an old man now, on his own personal Death Row – a retirement home. On the Green Mile, there was one guard who used his position to torment the prisoners in his charge: the cowardly, sadistic – but well-connected – Percy Wetmore. At the retirement home, Paul comes to see one of the staff, Brad Dolan – a cruel, petty bully who singles Paul out for special attention – as Percy’s present-day counterpart – with the crucial difference that now, Paul is one of the inmates, unable to defend himself against abuse.

But Paul has a friend – the kind and graceful Elaine Connelly – to whom he relates the events leading up to the last execution he presided over: that of John Coffey, a gigantic black man convicted of the rape and murder of two children. A man who proved capable of healing the sick with his touch.

Multiple storylines weave through the novel: Paul suffers from an agonising urinary infection; the condemned rapist-murderer Eduard Delacroix befriends – or is befriended by – a mouse called Mister Jingles; a new inmate, the psychopathic William ‘Wild Bill’ Wharton does his best to make everyone’s life a misery in his way, while Percy Wetmore does much the same in his; Warden Hal Moores’ wife, Melinda, is dying of an inoperable brain tumour. King connects all these threads with a level of craft that only an expert writer could demonstrate.

But the achievement isn’t just technical: the writing packs a ferocious emotional punch. The men on the Green Mile may be convicted killers, but that doesn’t prevent King evoking our sympathy for two of them at least – Arlen Bitterbuck, and Eduard Delacroix, although ‘Wild Bill’ Wharton is as vile and irredeemable individual as you could hope to find. John Coffey himself, of course, is an innocent man.

Beyond that, too, is a sober meditation on the nature of whatever God may preside over this world; that takes place, of course, within the context of King’s Christianity. You don’t have to share his faith to be affected by it.

All told, "The Green Mile" remains an absorbing and moving reading experience, showing King at his very best. However…

Well, I said there was one thing, and there is. And it’s pretty glaring.

In an interview back in the early ‘80s, King responded to a critic lamenting the inability of so clearly talented a writer to draw a convincing female character. He admitted there was truth in the allegation, and that he had similar problems writing black characters. Mother Abagail in "The Stand", Dick Hallorann in "The Shining" – ‘super-powered black people’, I think, was the phrase King used. Or in more modern parlance, Magical Negroes, whose main function turns out to be helping the white protagonists. Even Mike Hanlon in "It" is the member of the group who stays behind in Derry, who sacrifices his own prospects of success in order to be the ‘lighthouse keeper’.

John Coffey, unfortunately, is another figure in that same tradition: he just exists to help others. Of course, that has to do with his role as a Christlike healer: he’s just a conduit for the power of God, put on Earth to ‘help’, but the end result is another black guy who gives up everything for the Good White Folks. Hell, he lets himself be taken without demur to heal the wife of the man who’s going to order his death, and asks for nothing in return, not even his own life. King gets out of that particular tangle by having Coffey want to die, unable to bear the pain of the cruel world any more. And yes, in the context of the story’s Christianity, all of the above makes sense.

But at the same time it means the nice white prison guards don’t actually have to risk disgrace and imprisonment by saving the wrongly-convicted black guy’s life. It probably wouldn’t stand out so much if Coffey weren’t the only black guy in the novel.

I don’t enjoy writing that: I love King’s work, and I still love "The Green Mile". But that one flaw sticks out much more starkly in 2015 than it did in 1996.

Allowing for that, however, "The Green Mile" is still one of King’s masterpieces, and it’s anything but childish. I defy anyone not to be moved by Paul’s eventual fate – to be cursed, via John Coffey’s healing touch, with a longevity that ensures he outlives both everyone he loves, and his own wish to remain alive. That’s not only heartbreaking, it’s horror of a profound and subtle kind. “We each of us owe a death, there are no exceptions,” Paul concludes, “but sometimes, oh God, the Green Mile is so long.”


Simon Bestwick is the author of "Tide Of Souls", "The Faceless" and "Black Mountain". His short fiction has appeared in Black Static and Best Horror Of The Year, and been collected in "A Hazy Shade Of Winter", "Pictures Of The Dark", "Let’s Drink To The Dead" and "The Condemned". He lives on the Wirral with his long-suffering fiance, the wonderful Cate Gardner, and his new novel, "Hell’s Ditch", is out now.

He can be found online at his blog and also on Twitter as @GevaudanShoal
at 09:00

Email ThisBlogThis!Share to TwitterShare to FacebookShare to Pinterest
Labels: The Green Mile