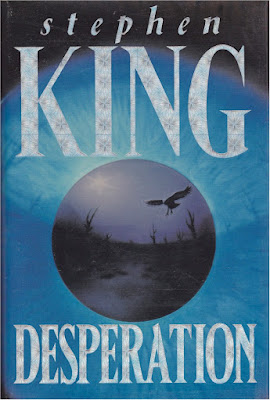 Take a pinch of the ‘base under siege by unknown force’ sci-fi trope. Add a hefty dollop of Cronenberg-style body horror. To this mixture, lightly pour in a whimsical yet deadly entity. Finally, pour in an ensemble of believable characters, stirring gently so that there are no lumps. Let this stand for a few moments then garnish with the most effective use of critters since James Herbert’s "The Rats" Trilogy. Congratulations, you’ve just made a cake of "Desperation".

Of course, there’s more to Stephen King’s tale of desert horror than the above mentioned ingredients. I’m just giving you a flavour.

"Desperation" is a personal favourite of mine. It was the book that brought me back to King after a spell of being underwhelmed by "Insomnia" and "Rose Madder". I’m glad it did. At that point, I was a little out of love with the King because of those books. The sheer ruthlessness and ferocity displayed by King in these pages reaffirmed my allegiance to the Maine Man and I haven’t looked back since.

There’s a nihilism to this work that hadn’t been seen since his earlier efforts. From the moment the possessed Collie Entragian blasts down a hapless captive and then drags the dead man’s corpse over a little girl’s body on the way to jail, you know that King’s not messing about. He is going to horrify you even if he has to drag you kicking and screaming. That shock – the death of someone who is painted to be a main character before being effortlessly dispatched – sets the tone nicely and the tone is one of desperation (funnily enough).

"Desperation" is still recognisable as a King story – all the elements that long-time fans are familiar with find a place on the page. In the characters, we have the recovering artiste, in this case, Johnny Marinville a recovering alcoholic writer in search of inspiration; David Carver, a serious ten-year-old who seems to receive periodic flashes from God but then has his faith stretched to the limits by the total destruction of his family; Steve Ames, the laconic sidekick who assumes a more prominent role as the novel progresses and Cynthia Smith, the fiery feisty one. All of these character tropes have been used by King over his long career but his genius at characterisation makes them believable and fresh. You recognise the type and also the character themselves.

The situation itself is nice and straightforward. Our small band of survivors are being kept alive for the sole purpose of being hosts for Tak – a darkly funny and extremely sinister entity from beyond our world. Isolated, with no back up, weapons or even a plan to speak of, they must try and escape and, if at all possible, bring Tak down before they are possessed and effectively overwritten by Tak’s forceful personality.

Cue lots of tension, scares and genuinely disturbing moments as King put his characters through the grinder. Tak himself, (or itself. I’m assuming he is male), is presented a force of nature with an arch personality. King doesn’t fall into the trap of explaining Tak’s birth and life. He is just there in a space beyond our reality looking for a way in as well as a way to survive. This makes our evil one more inscrutable and unknowable, adding to the physical threats he possesses. Not only can the creature possess human beings for a limited time (even more limited if the host has something wrong with them), but it can also impose its will on eagles, snakes and, in one memorably horrifying moment, spiders. This multi-layered threat ups the ante for the survivors as well as making for some uncomfortable reading.

Unlike a lot of later King books, the ending to "Desperation" is satisfying and well rounded. There’s a heroic sacrifice and the remaining survivors escape. It’s no happy ending – David Carver is alone, Mary Jackson is now a widow, Steve Ames and Cynthia have each other but there’s a sense that these four people will be forever scarred by the events in Nevada.

It’s bleak, unnerving, unrelenting and more than a little heartless to its characters but "Desperation" is one of King’s finest works and well worth a trip to the bookstore (or Amazon if you’re lazy like myself). It remains one of the ‘Exalted’- the King novels I can read again and again without getting sick of them. One day, I’ll share that list with you.


note - Desperation was also reviewed by Kit Power on this link
at 09:00

Email ThisBlogThis!Share to TwitterShare to FacebookShare to Pinterest
Labels: Desperation