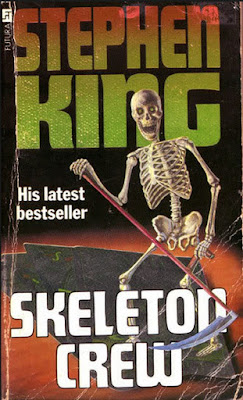 Skeleton Crew was first released in the UK in 1985. It would be another eight years before I read it for the first time.

Life has a funny way of turning out. I was a fantasy geek at school. Into the usual stuff, Lord of the Rings, Fighting Fantasy and the Dragonlance Chronicles. It wasn’t that I didn’t like horror, I just hadn’t been properly introduced as yet. So fantasy and I carried on going steady for a while.

As with lots of geeks through the years, I was bullied. Nothing as severe as being beaten up and going home with the smell of my own blood in my nostrils and my underwear wedgied up my backside. No, this was more intimidation with a bit of roughing up here and there. It didn’t matter that I stood six foot two in my stocking feet, I still let it happen because I didn’t know any different.

I had my own assigned bully (there’s always one, isn’t there). His name was also Phil; Phil H (we’ll leave the full surname to the mists of time). Now this is where life has a funny way of turning out. Phil got me into horror. Phil was heavily into horror films and wanted to write a script. I enjoyed writing so a peculiar partnership was born. The script went nowhere but my love of horror grew. The delicious delights of the dark laid out before me. One day Phil introduced me to Stephen King and we enjoyed our first tender kiss (metaphorically speaking). The book was Skeleton Crew and my younger self was blown away. Over two decades later, after I had cheated time and time again on one of my first loves, I returned to Skeleton Crew with the rose-tinted vision of one remembering happier times.

So, how wise is it to revisit old loves from your adolescence? Is the second kiss just as sweet? Well, dear reader, let me reveal just that…

First off, I had forgotten just how many stories Mr King had packed into Skeleton Crew. As a single author anthology, it comes in at a whopping 600+ pages, 23 tales in total.  Now that’s a lot of bang for your buck. And there’s some big names in there: The Mist, The Raft, Word Processor of the Gods, Survivor Type and Gramma to pick out a handful.

King’s style is his trademark ‘come sit down a while, and let me tell you a tale’ whimsy where the narrator’s voice is a cross between Morgan Freeman in Shawshank Redemption and John Hurt in Jim Henson’s The Storyteller. You’re pulling up an easy chair and sipping on a beer whilst the afternoon sun drops slowly lower against the horizon. King draws you into the tales, catching you off guard as the horror starts to seep onto the pages. For the most part. Now and again you’ve barely pried the top off that Bud before the macabre is making a grisly appearance. Amongst others, we are introduced to car journeys through the most demonic of woods, men who can kill with a single handshake, young love fighting against the world, sprites within typewriters and a grim toy monkey who is always a portent for death.

The stories vary in length (The Mist rocks in just shy of 150 pages, Here There Be Tygers is over and done with in six). The shorter tales are the ones you wonder if they would have appeared had King not established himself as a name. Paranoid: A Chant and For Owen (after King’s son) seem out of place and the book would not have suffered for their exclusion.

At times King veers towards science fiction, a love letter to the B movies he used to watch as a kid. The Jaunt gives us a taste of teleportation, exploring what happens to the mind as the body is sent from one point in space to another. Beachworld takes us to a sentient planet covered in sand as far as the eye can see. It’s an exploration into madness and isolation told through the experiences of two crash landed astronauts. Both are good pieces of writing, although Jaunt feels slightly like King is playing with an idea to get to a punchline, but both feel out of place within the wider collection of stories.

Where King is strongest is when dabbling with the monsters under the bed and those within ourselves. The Raft, as featured in a later Tales from the Crypt anthology movie, is wonderfully simple but deliciously disturbing. King is a lot darker than I remembered. He also throws the C bomb in here and there in the book which passed over me at the time. In The Raft, a tale of four college kids on a moored pontoon surrounded by an expanse of lake, we (they) are terrorised by an amorphous blob floating in the water. I defy any reader not to shiver as King describes a human ankle being pulled through a gap no wider than the width of a finger. The Mist, Skeleton Crew’s opening piece and another brought to the silver screen, this time by Frank Darabont, brings us Lovecraftian terrors hidden in the depths of dense, unexplained fog. King plays the father/son card here for all its worth, holing the pair up in the local convenience store as the mist rolls in, the wife/mother stuck back at the house. King gets to bring together an ensemble cast to ratchet up the tension, adding threat inside the store as well as in the mists outside. A great tale but marred slightly by an unneeded sex scene which King himself comments on in a handy notes section at the end of the book as something he didn’t like. Also, when you read the final page you’ll wonder why a certain message wasn’t provided towards the start of the tale!

I apologise for what I am to do now. I am sure there are stories readers want me to mention which I haven’t so far. It’s not to say they do not deserve a mention, more that they didn’t jump out of the pages to me as readily as some others. Which means, dear reader, we are now into the final stretch. In any anthology, you’ll always have a favourite. The one which stays with you until the Grim Reaper comes a’knocking. It was always Survivor Type for me. A dubious physician stranded on a small, deserted island with a knife, a king’s ransom of cocaine (forgive the pun) and the clothes he is wearing. The story is all about how much is a man willing to endure to survive. It’s a wonderful exploration of a descent into madness. The subject matter is bleak. Very bleak. This is one of my all-time favourite short stories. It doesn’t put a foot wrong. It is tight, very little fat on the tale at all but it, above any other story, was the tale which grabbed 17 year old me and said ‘this is how you do horror’. Except it is not my favourite story in the book. I thought it would be but I’ve changed over the years. Something else wangled its way into my affections. An old, crusty Gramma.

Gramma is clever. It is the type of story where you’re screaming ‘get outta there’ to our hero; George, a young child left in the house with his creepy Gramma. Except he won’t. Duty won’t let him. And fear. Mainly fear. You see, Gramma has a secret past. One the rest of the family knows but won’t tell George. Something which makes everyone fear her. And Gramma has just died on George’s watch. She can’t be dangerous any more. Surely he’ll be fine. Surely. But, shhhh, I’ve said too much – just go and read the story and see for yourself.

So, how was "Skeleton Crew" second time around? Overall, a great collection which everyone should read but one which could have been even better with an editor more willing to say no to some of the stories included. Love’s first kiss was worth revisiting but there’s always that danger that you’ll see some flaws you were oblivious to before.


Phil Sloman is a horror writer from the south coast of England with a slew of horror stories scattered across the ether. In the humdrum of everyday life, Phil lives with an understanding wife and a trio of vagrant cats who tolerate their human slaves. There are no bodies buried beneath the patio as far as he is aware