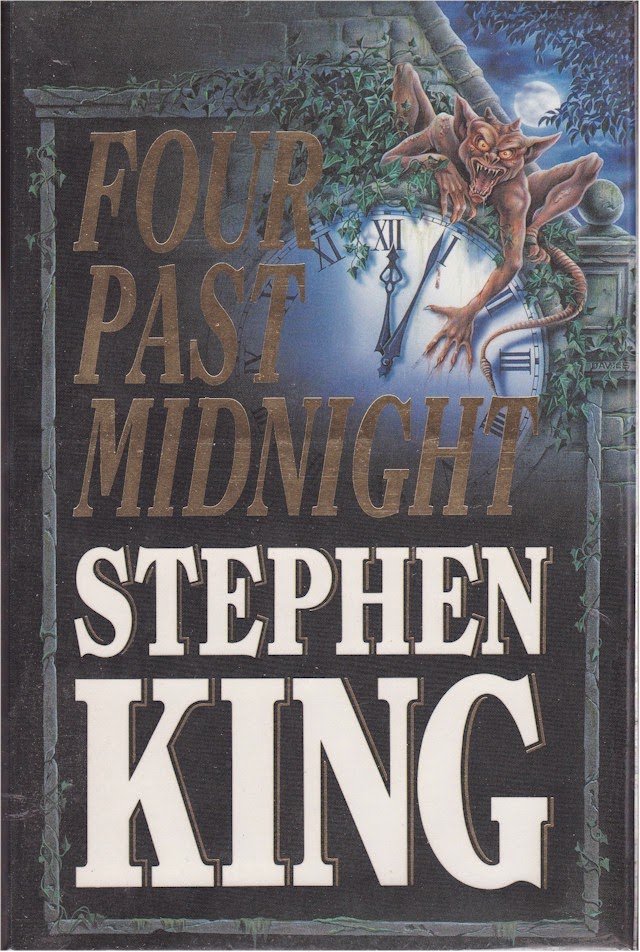 Oh my goodness yes it does.

Take this book I’m looking at now. "Four Past Midnight" it’s called. I’ve taken it down from the shelf to check when I bought it. It’s the first printing of the NEL paperback, (and yes I felt a little twinge of pleasure typing those capital letters) from 1991.

It’s no secret that I’ve been a short story nut since, well, since I could read, really. Armada Ghost Books, Pan Horror, Robert Bloch, R Chetwynd-Hayes and many, many others. It’s therefore not going to surprise anyone that for a long time I didn’t get around to reading much Stephen King other than his collections "Night Shift" (wonderful) and "Skeleton Crew" (equally marvellous). A recent study by university medical school education departments showed that a frighteningly high proportion of doctors read nothing other than textbooks from the day they enter medical school. By which I mean around 70-80%. So I hope you will not begrudge me too much if I say that when I picked up "Four Past Midnight" in my first year post qualification it was the first Stephen King book I had probably read in about five years. It wasn’t short stories, but that brick-thick volume with the cracking cover was actually four different novellas. I felt I could probably manage that.

All of this self-indulgent preamble is by way of explaining why I picked this particular book to write about. It’s very important to me because it was close to the first fiction I read after five years of multiple exams every term and that searing sense of guilt we all got if we read anything that wasn’t a telephone directory-sized textbook about respiratory illness, or pancreatic cancer, or the epidemiology of sudden infant death syndrome. Hey I passed so it was the right thing to do. Now I needed to redress the balance for my soul’s benefit.

I was working in Mansfield at the time. The hospital there is long gone, now. When it stood the old District and General was a Victorian gothic monstrosity straight out of Dickens, with twenty-bedded wards and ceilings so high that when a pigeon got in once we had to get Colin, ward pharmacist and bat enthusiast, to bring in one of his immensely long bat-catching nets to rescue it.

One Saturday I had a free morning, the sun was shining, and so I settled down to read "The Langoliers". It remains one of my favourite King stories, and I love it so much that I have, to this day, carefully avoided the television mini-series adaptation directed by Tom Holland. Much as I love some of his movies I know even he wouldn’t have been able to do justice to the scenes King had put in my head.

"The Langoliers" is a story about an aeroplane that passes through a rift in space, taking it back to the past. But this isn’t the past we might visit in a time machine. This is a fascinating and original spin on what the past might actually look like. Used up, pallid, tasteless, the airport at which our characters find themselves is a place where time has literally moved on, a moment which has been lived and discarded. Everything looks anaemic, sandwiches from a machine have no taste, and always, in the distance, is a constant rumbling sound.

We get to find out what that is, of course. It turns out that the past is not static, those used up moments are not allowed to remain - they have to be destroyed, crushed, perhaps ever recycled. And the entities responsible are the title creatures - huge, cartoon-like spheres with a set of powerful jaws who eat everything before them - grey brickwork, etiolated vegetation and, of course any living beings who shouldn’t be there anyway.

To the background of this very real threat King adds his trademark motley assortment of characters, and has some of them go mad under the strain. Like "The Mist" (another fine novella), it provides another fine layer of carefully-developed jeopardy which the remaining ‘sane’ characters have to deal with. Do they make it back? Go and read it to find out. You really should.

"Secret Window, Secret Garden" was my first introduction to a theme that is probably better developed in King’s earlier full length novel "The Dark Half", published in 1989. But because I hadn’t read that I was spellbound by the tale of Mort Rainey, the successful novelist who is being pursued and ultimately victimised by a mysterious character called John Shooter who claims Rainey has stolen his work. I still regard it with fondness, even though "The Dark Half" is probably better.

"The Library Policeman", now there’s a story that chilled me to the bone. I can still see the living embodiment of Sam Peebles’ fears rearing over him - a terrifying pedophile fifteen feet tall stalking the book stacks of his local library, the creation of yet another classic King character. Ardelia Lortz is a kind of psychic vampire who feeds on the fear of children (what a great idea). Does she get defeated? Again, read it to find out.

"Four Past Midnight" concludes with "The Sun Dog", which I personally still find the weakest and least memorable of the stories. Young Kevin Delevan buys a Polaroid camera and finds that every photograph shows a large and unpleasant-looking dog coming closer. He takes it to Reginald ‘Pop’ Merrill, whom King reveals in flashback to be Castle Rock’s very own Lionel Barrymore’s Mr Potter from Capra’s "It’s a Wonderful Life". Merrill takes the camera, intending to use it for profit, but needless to say it all goes horribly wrong. Full marks to King here though for providing a cracking epilogue.

“The dog is loose again. It is not sleeping. It is not lazy. It’s coming for you Kevin. It’s very hungry. And it’s VERY angry.”

"Four Past Midnight" got me back into reading after too long an absence. Reading it again has also made me realise what made me want to do story notes for my own collections, because that’s what we also get here - there’s a pleasant, chatty introduction to each tale that makes it feel a bit like a Twilight Zone episode. Hey, if you’re going to steal, steal from the best.

And Stephen King really is the best.

John Llewellyn Probert won the 2013 British Fantasy Award for his novella "The Nine Deaths of Dr Valentine" and 2014 saw the publication of its sequel, "The Hammer of Dr Valentine" (both from Spectral Press). He is the author of over a hundred published short stories, six novellas and a novel, "The House That Death Built" (Atomic Fez). His first short story collection, "The Faculty of Terror", won the 2006 Children of the Night award for best work of Gothic Fiction. His latest stories can be found in Best British Horror (Salt Publishing), Psychomania (Constable Robinson), La Femme (NewCon Press) and Terror Tales of Wales (Gray Friar). Endeavour Press has published "Ward 19", "Bloody Angels" and "The Pact" - three crime books featuring his pathologist heroine Parva Corcoran. He is currently trying to review every cult movie in existence at his House of Mortal Cinema (www.johnlprobert.blogspot.co.uk) and everything he is up to writing-wise can be found at www.johnlprobert.com. Forthcoming projects include a novel from Constable Robinson, a novella from Salt Publishing, and a new short story collection from Spectral Press.
at 09:00

Email ThisBlogThis!Share to TwitterShare to FacebookShare to Pinterest
Labels: Four Past Midnight