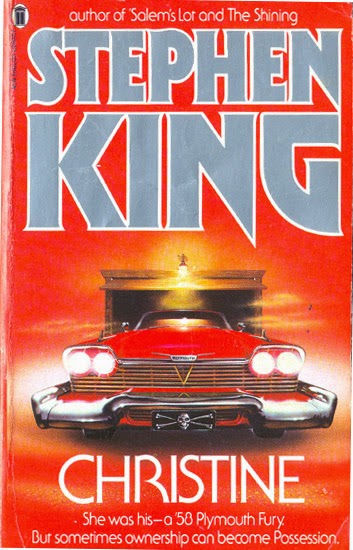 People talk about King with a certain reverence for his role in horror and his impressive and still growing catalog of titles. Me I was never really a huge fan. I missed him when I started horror, I was reading Lumley and Koontz and of course Barker but somehow never picked up a King. Still I've seen some of the films and enjoyed "Carrie" and "The Shining" in that form, so when the challenge went out I thought why not and jumped on "Christine" as the premise had always intrigued me. I mean, who doesn't love a shiny red car and a spot of violent death?

Christine the killer car. A tale of a boy who's obsession with his car turns deadly, or maybe it's the car's relationship with him. And this is King who was killing off our favourite characters long before it became a GRRM meme.

So this is the story of two boys, a girl and a car and in many ways reflects the typical coming of age journey those things can provoke. Best friends divided over an obsession, a guys affection and attention suddenly split between his girl and his new passion, the best friend there to listen, rebelling against the parents... You can see so many key plot points just from that and you'd be right. That's part of what I love about this book and I was right to go for this one because as it turns out I do love it.

So much of this story is so very, very ordinary. Obedient boy with domineering mother suddenly starts answering back, doing his own thing, becomes surly and difficult, you know, like a teenage boy. It grounds the story, balances out the supernatural elements. If it were just that Christine changed Arnie in horrifying unrecognisable ways, the reader would have nothing to catch onto among the stranger happenings. If everything is disconnected from reality it becomes 'blah blah scary stuff whatever'. Not so with Kings love song to a car. It's recognisable as entirely normal in some ways, these are things we can all identify with (okay, except for the possession and death bits). Still, teens suddenly develop new interests, neglect their friends and lovers, fall out with their families. Not just teens, but it's close to being a universal teenage experience. It was clever to build everything around that familiarity.

Of course Christine isn't just any car and from the moment Arnie sees her it seems she owns him, not the other way around. Arnie is obsessed, will do anything to posses her, becomes bad tempered with anything that might thwart him quickly and all the time the narrator is explaining this away as we all would, he's tired, it's his first car, of course he's defensive.

The supernatural elements in this book are unpleasant, they’re base and very human, in spite of being couched in a car. Christine is possessed rather than sentient which is in some ways less up my street but actually makes for a much nastier book, so I was won over.

King is witty and clever throughout, from the chapter titles taken from car-related songs, to his use of language and speech to accent the changes going on, making the reader move from sympathetic to recoilingly-appalled. He uses all the senses absorbing the reader in smells and sounds, a damp meaty rotting odour, the smell of burning rubber and melting snow, metal and blood. You can almost hear gears grinding and the wheezy cough of a knackered engine. These details let you live the creeping horrific realisations that overtake the narrator and Leigh (the girl) as Christine and (her first victim) Arnie terrorise anyone who gets in their way in a trail of escalating violence.

In case anyone hasn't read it I'll stay away from major spoilers, but the book kept me tense to the end and Christine's malevolence toward other characters was tangible. A good place to start with classic King and a quick satisfying read. I'm not sure I'm a true convert, but I was pleasantly surprised to enjoy this one as much as I did.

-----
Adele Wearing was a book reviewer for a number of years before being bitten by a radio active fox in the summer of 2012. Newly emerged as Aunty Fox she claims to have killed a man in Reno just to watch him die.

As a means of diffusing her bloodlust and directing her apocalyptic leanings she started Fox Spirit Books, an indie press that runs on the passion of the fearless genre warriors known mostly as The Skulk.

She generally feels that being a publisher is a better route to world domination than stealing a tank, so it's all working out quite well really.

More details can be found at the website - www.foxspirit.co.uk

Email ThisBlogThis!Share to TwitterShare to FacebookShare to Pinterest
Labels: Christine